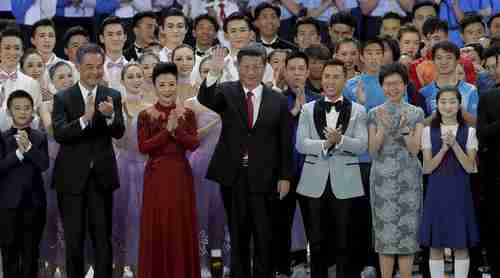 No one really expected China to fully honor the 1984 Sino-British Joint Declaration that led to the handover in 1997 of Hong Kong to China, after 152 years as a British colony.

In the Joint Declaration, China promised to honor the principle of “One Country, Two Systems.” In particular, citizens of Hong Kong were to have civil liberties and fundamental rights such as political freedom, free elections, press freedom, freedom of speech, and an independent judiciary. The people of Hong Kong had enjoyed these fundamental rights as a British colony, and China committed to preserving them for at least 50 years following the handover, until 2047.

However, China’s Foreign Ministry on Friday repudiated the 1984 agreement once and for all. According to spokesman Lu Kang:

Now that Hong Kong has returned to the embrace of the motherland for 20 years, the Sino-British Joint Declaration – as a historical document – no longer has any practical significance.

It also does not have any binding power on how the Chinese central government administers Hong Kong. Britain has no sovereignty, no governing power and no supervising power over Hong Kong. I hope the relevant parties will reckon with this reality.

The Sino-British Joint Declaration remains as valid today as it did when it was signed over thirty years ago… It is a legally binding treaty, registered with the UN and continues to be in force. As a co-signatory, the UK government is committed to monitoring its implementation closely.

The exchange of views followed a remark by Britain’s Foreign Minister Boris Johnson: “I want to stress that Britain’s commitment to Hong Kong – enshrined in the Joint Declaration with China – is just as strong today as it was 20 years ago.”

On Wednesday, about 30 young protesters were arrested after staging a pro-democracy sit-in at the site of the July 1, 1997, handover. In other actions, Hong Kong police warned journalists to avoid any actions unrelated to reporting and said that digital media outlets will be barred from covering the celebrations.

Locking up peaceful protesters could be considered one of the more benign actions of the thuggish Chinese government. In 2015, five Hong Kong book publishers mysteriously disappeared after publishing books critical of China’s communist leadership. They resurfaced a year ago and described being abducted by thugs and kept for months in solitary confinement in a cramped cell in mainland China. They were tortured and required to confess to crimes they had not committed.

Other actions could be considered even worse. Chinese nationals living in the United States and Europe who posted criticisms of China’s communist party have had their families back in China abducted and jailed.

This is the backdrop to Xi Jinping’s speech on arriving in Hong Kong:

“fter nine years, I am happy to step on Hong Kong land again. In two days, it will be the 20th anniversary of Hong Kong’s return to the motherland. This is a big event, a celebratory event for the country and Hong Kong.

[I give] my warm congratulations to the great achievements over the 20 years since the establishment of the Hong Kong Special Administrative Region… [I give my] heartfelt blessing that Hong Kong will achieve new success.

We will review the extraordinary journey of Hong Kong over the past 20 years across all sectors, summarize the experience and plan for the future, to ensure ‘One Country, Two Systems’ will be stable and everlasting.

This is a politician speaking, and I don’t think that even he is so delusional that he believes that that Hong Kong’s form of government will be stable and everlasting. Like Taiwan, Hong Kong is deeply divided between those who are completely loyal to the government in Beijing and those who are not, wanting anything from Western-style fundamental rights to full independence.

Xi and other Beijing officials are well aware that time is not on their side. Younger generations, particularly those who grew up after the horrific Tiananmen Square massacre in 1989, where China’s army massacred perhaps thousands of students who had gathered in Beijing to protest, are less and less loyal to Beijing and more and more supportive of separation or independence. This trend is continuing in both Hong Kong and Taiwan, and Beijing officials are desperately trying to change the trend, either by self-serving speeches by Xi and others, or by bloody crackdowns by Chinese thugs.

Although China never really supported the “One Country, Two Systems” philosophy, the worst and bloodiest violence by Hong Kong police thugs occurred in the summer of 2014, when tens of thousands of Hong Kong citizens, mostly college age, staged a series of pro-democracy protests, bringing central Hong Kong to a standstill.

What sparked the Umbrella Movement was that Beijing reneged on its commitment to “one country, two systems,” in particular to the commitment to free elections. For the approaching 2017 elections, the only candidates who will be permitted to be run have to be approved a “nominating committee” completely controlled by Beijing. So the effect is that the so-called “free” elections are rigged to guarantee that only candidates selected by Beijing can win the elections.

The Umbrella Movement was considered a complete failure by its participants because nothing has changed. The demands to allow free elections in 2017 were ignored, and it’s clear to everyone, especially the young people who protested, that peaceful protests will not succeed in changing anything, and that something else must be tried. Washington Post and Guardian (London, 17-June-2016) and CS Monitor (29-Mar-2016) and Hong Kong Free Press