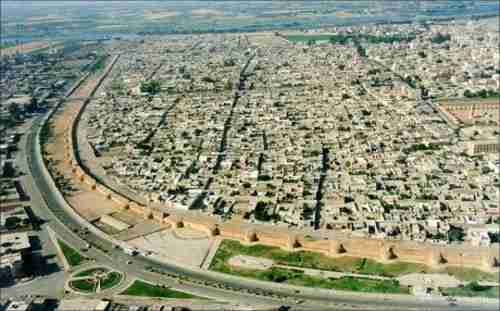 According to a US Central Command (Centcom) statement:

Conducting targeted strikes on two small portions of the wall allowed Coalition and partner forces to breach the Old City at a locations of their choosing, denied ISIS the ability to use pre-positioned mines, IED and VBIEDs, protected SDF and civilian lives, and preserved the integrity of the greatest portion of the wall. …

Unlike ISIS who deliberately destroyed the ruins of Palmyra and the Al-Nuri mosque and uses sites such as the Rafiqa Wall, hospitals, schools and mosques as weapons storage facilities and fighting positions, Coalition forces are making a great effort to protect civilians and preserve these sites for future generations.

Raqqa is the major stronghold in Syria of the so-called Islamic State (IS or ISIS or ISIL or Daesh) and has been in the past named by ISIS as the capital of its caliphate. The SDF have been preparing for months for this final battle to recapture Raqqa from the 2,500 to 3,000 ISIS fighters that remain in the Old City.

The 2,500 meter wall that surrounds the Old City was constructed between 771 and 775 AD. The breaching of the wall is being called the most important development to date in the battle for Raqqa, since it allowed SDF units to enter the Old City quickly and surprise ISIS forces, without having to enter at existing cracks in the wall where ISIS has planted mines and improvised explosive devices (IEDs).

U.N. officials say 50,000 to 100,000 civilians remain in the city amid “dire” conditions. Estimates of how long the battle of Raqqa will take range from a few days to a few weeks. AP and Rudaw (Kurdistan) and Long War Journal

Turkey fears double-cross from US on arms for Syrian Kurds

The Syrian Democratic Forces (SDF) leading the fighting in Raqqa are led by Kurdish People’s Protection Units (YPG), with mostly Kurdish fighters and some Arab fighters. The US considers the SDF the best fighting force in the region to defeat ISIS.

Turkey has never hidden its opposition to using the YPG, which is linked to the Kurdistan Workers Party (PKK), which is recognized as a terrorist group by the US and European countries. The PKK have conducted a 30-year separatist insurgency in Turkey, and in recent years have conducted some horrific terrorist attacks in Turkish cities. Turkey would have preferred to use Free Syrian Army (FSA) forces backed by Turkey for the Raqqa operation, as well as the Mosul operation in Iraq.

US forces have been supplying advanced weapons to YPG fighters for the Raqqa battle. Turkey says that the US promised that the US would take the arms back after the battle ended so that the weapons could not be used against Turkey.

Now Turkish officials are furious that the US is apparently reneging on its promise to retrieve the advanced weapons. Even worse, from Turkey’s point of view, U.S. Defense Secretary Jim Mattis has left open the possibility of the opposite occurring: That the US will continue to supply the YPG with advanced weapons and equipment, even after Raqqa has been recaptured from ISIS.

Mattis said that some weapons would be recovered, but when asked about further arming of the YPG, he said, “Well, we’ll see. It depends what the next mission is. I mean, it’s not like the fight’s over when Raqqa’s over.”

The criticism by Turkey’s president Recep Tayyip Erdogan has been extremely harsh, complaining that it is a violation of the Nato treaty:

We will be together in NATO, and you will act together with terrorist groups. What kind of business is this?

In this case, the NATO treaty should be revised.

Those who think that they can fool Turkey by saying that they will get those weapons back will eventually understand the vital mistake they made, but it will be too late. We will call to account the real owners of those weapons for every drop of blood they shed with those weapons.

Turkey points out that there have been a series of US provocations against Turkey. They claim that US officials have repeatedly lied about YPG and PKK support in Syria. The US promised to withdraw the YPG/PKK from the Syrian city of Manbij after ISIS was defeated, but the US handed control of the city over to them anyway. After that, according to Turkish news reports, it became clear these promises were mere diversions.

Turkey is becoming concerned that the YPG/PKK are controlling larger and larger regions of northern Syria, along the border with Turkey. Last year, Turkey launched Operation Euphrates Shield, a military operation by the FSA backed by the Turkish military, to prevent the Kurds from taking control of the entire northern border of Syria, and declaring an independent Kurdish state of Rojava.

There have been reports that Turkey is planning further military action against the Kurds in northern Syria. Reuters and Daily Sabah (Ankara) and Yeni Safak (Ankara)

Concerns grow about Syrian conflict after defeat of ISIS

It is expected that it will be only a matter of days or weeks before ISIS will be defeated in both of its main strongholds, Raqqa in Syria and Mosul in Iraq. What will that mean for the Syrian conflict?

It is well to remember how the Syrian war came about. The civil war in Syria was caused by president Bashar al-Assad when he unleashed his army and air force against peaceful protesters in 2011. Things really turned around in August 2011, when al-Assad launched a massive military assault on a large, peaceful Palestinian refugee camp in Latakia, filled with tens of thousands of women and children Palestinians. He dropped barrel bombs laden with metal, chlorine, ammonia, phosphorous and chemical weapons onto innocent Sunni women and children, he has targeted bombs on schools and hospitals, and he has used Sarin gas to kill large groups of people. He considers all Sunni Muslims to be cockroaches to be exterminated.

Thousands of young Sunni jihadists from 86 countries around the world traveled to Syria to fight al-Assad, and they formed ISIS. At the same time, local Syrian Sunni fighters opposed to al-Assad formed the Free Syrian Army (FSA) and the al-Qaeda linked al-Nusra Front, while Kurdish fighters joined Arabs and formed the Syrian Democratic Forces (SDF). Al-Assad has driven millions of Syrians out of their homes, into Lebanon, Jordan, Turkey, and Europe. Other forces that have entered the war include Americans, Turks, Russians, Iranians, and Hezbollah.

All of these groups have very different objectives, but they were unified by their opposition to ISIS. With the defeat of ISIS, they have no one left to fight but each other. In particular, the Syrian people against whom Bashar al-Assad has committed years of torture and atrocities will never agree to return to the way things were before 2011.

As regular readers know, Generational Dynamics predicts that the Mideast is headed for a major regional war, pitting Sunnis versus Shias, Jews versus Arabs, and various ethnic groups against each other. Generational Dynamics predicts that in the approaching Clash of Civilizations world war, the “axis” of China, Pakistan, and the Sunni Muslim countries will be pitted against the “allies,” the US, India, Russia, and Iran.

The conflict in Syria is very far from ended. To paraphrase Winston Churchill, the defeat of ISIS is not the beginning of the end, but it may be the end of the beginning. Atlantic Council and Straits Times and Hurriyet (Ankara)