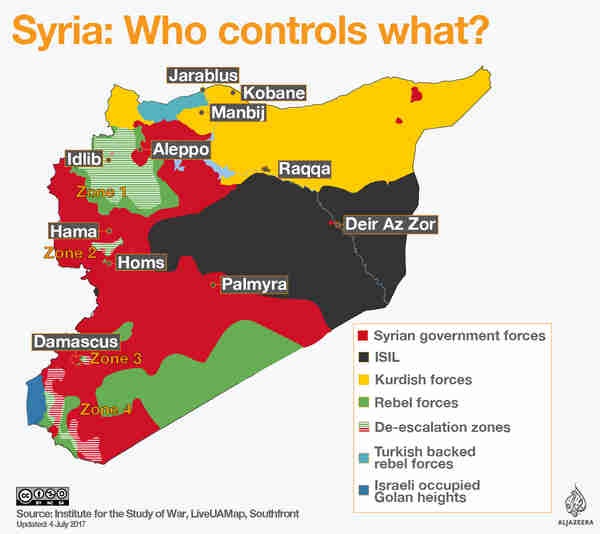 Russia’s plans to lead all the factions fighting in Syria to reach a negotiated peace settlement appear to have collapsed on Wednesday, when Russia, Turkey, and Iran failed to agree on details of four “de-escalation zones” or “safe zones” proposed by Russia at a meeting in Astana, the capital city of Kazakhstan in Central Asia.

Wednesday’s meeting was based on a peace plan that was signed two months ago. (See “9-May-17 World View — Russia, Iran and Turkey announce yet another farcical new Syria peace plan”.)

In that article, I listed the reasons why it was farcical. The principal reason is that it did not include the actual parties to the Syrian war – the Shia/Alawite regime of Syria’s president Bashar al-Assad and the Sunni opposition. In fact, none of these actual participants in the war agreed to the terms of the agreement. That’s why the talks on Wednesday collapsed.

The three countries – Russia, Iran, and Turkey – are supposed to be the “Guarantors” of the agreement, providing whatever troops are necessary for the functioning of the checkpoints and observation posts as well as the administration of the security zones.

A new meeting of the three countries is to take place in Tehran on August 1-2, with a self-imposed deadline of the last week of August to work out all the details. Reuters and AFP and Sputnik (Moscow) and VOA

The map of Syria above shows the four de-escalation zones on the left (western side) of the map of Syria appearing above. The four zones, taken together, are enclaves containing over 2.5 million Sunni civilians, mostly women and children, in areas controlled variously by al-Qaeda-linked or moderate opposition rebels. These millions of civilians are people that al-Assad in the past has made clear that he wants to exterminate as if they were cockroaches, which is why neither Assad nor the opposition rebels were willing to sign Russia’s agreement.

Here are al-Jazeera’s descriptions of the four zones:

There is little agreement among all the parties as to how the so-called “Guarantors” of de-escalation zones or safe zones are going to enforce the terms of the proposed agreement.

Russia had announced on Tuesday that they would deploy the Russian military police carrying light weapons within two to three weeks, but that plan is now on hold after the peace talks collapsed on Wednesday.

Because of the difficulty in getting agreement on whose military forces will be occupying each of the safe zones, Russia has asked two Central Asian countries, Kazakhstan and Kyrgyzstan, to send some of their own soldiers as peacekeepers.

However, Kazakhstan has already refused, saying that an essential condition for sending Kazakh peacekeepers is the existence of a UN Security Council resolution and the corresponding mandate of the UN. Al-Jazeera and Sputnik News (Moscow) and Sputnik News

Is the end of the Syrian war in sight?

Last year, al-Assad’s military, supported by overwhelming destructive force provided by Russia and Iran, was going to destroy the city of Aleppo. That was going to end the war because it would demoralize the opposition groups and jihadists so they would lose interest in fighting, and would go home.

At the time, Bashar al-Assad called it “history in the making”:

Bashar al-Assad has proven himself to be psychopathic genocidal killer, the worst war criminal so far this century, so it is not surprising that he was totally delusional about the outcome of his slaughter of the people of Aleppo.

I’ve written about any number of Syria peace plans over the years. Kofi Annan, the virulently anti-American former Secretary-General of the United Nations from Ghana, was the first UN envoy on Syria. Annan formulated a farcical six-point ‘peace plan’ which said absolutely nothing, but which al-Assad used as a cover to continue exterminating innocent Sunni women and children with impunity.

After Kofi Annan was repeatedly humiliated by Bashar al-Assad, the UN appointed a new Syria peace envoy, Lakhdar Brahimi, to replace Kofi Annan. Brahimi was not as much of an idiot as Annan was, but he still resigned in disgust in May 2014, after it became clear that al-Assad really had no desire to do anything but exterminate Sunni civilians. Now, the current UN envoy is Staffan de Mistura, who goes around all the time saying, “This will not be tolerated,” but who accomplishes nothing except, again, to provide cover for Bashar al-Assad’s atrocities.

All of these peace plans have failed because the psychopathic, delusional Bashar al-Assad does not want the war to end. The war will never end as long as al-Assad is in power.

The map at the beginning of this article shows how Syria is currently divided up among different militias. Russia’s peace plan did not address any of this, except for four zones in the western region supposedly still controlled by al-Assad. There will be a particular dispute between Turkey and the Kurds, as the latter try to join the two yellow areas into a single Kurdish state called Rojava, and Turkey does everything possible to prevent it.

The latest fantasy about the end of the war is that the war will end in the next few weeks, due to the defeat of the so-called Islamic State (IS or ISIS or ISIL or Daesh) in its last two strongholds, Raqqa, Syria, and Mosul, Iraq. According to this theory, the remaining opposition forces are located in small, geographically isolated enclaves, so they won’t be able to coordinate their actions into a significant fighting force.

The problem with this reasoning is that the defeat of ISIS in Raqqa and Mosul is just a simple tactical victory. It does not address the core issues that started the civil war in 2011, when al-Assad began exterminating Sunni women and children who were simply peaceful protesters.

Furthermore, defeating ISIS does not mean the end of the fighters in ISIS. As we’ve been reporting recently, they can flee to Deir az-Zour in eastern Syria. Scattered Sunni rebel militias can unify for the same reason as before — to fight against al-Assad. That’s the reason that tens of thousands of jihadists from 86 countries around the world came to Syria, and ended up forming ISIS. We should expect to see new versions of al-Nusra and ISIS to be formed in the weeks to come. War on the Rocks