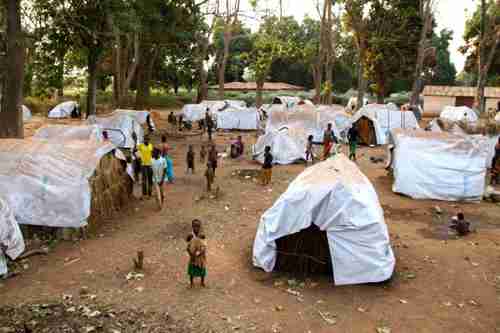 At least 30 civilians, including six Red Cross workers, were massacred on August 7 in the town of Gambo in southeastern Central African Republic (CAR). The violence is blamed on the militias from the Muslim Union for Peace in the Central African Republic (l’Union pour la Paix en Centrafrique, UPC) which broke off from the Muslim Séléka militias in 2014.

According to Antoine Mbao-Bogo, the president of the Central African Red Cross:

In principle, we shouldn’t be targets. I’m actually in tears right now, and the entire Red Cross is appalled and worried.

We don’t have guns, or any kinds of weapon.. we’re just trying to do our job, which is to help people. Among those killed last week, there were pregnant women killed. They’d come to the health center to give birth. And they had their throats cut. This is something that goes beyond my understanding.

This illustrates how younger generations do not understand what is going on. The survivors of World War II saw something like this happen many times, so they would not be surprised by it today, but those survivors are all gone now, and the people left behind have absolutely no clue how the world works.

Fighting has been intense in that entire region of CAR, around the town of Bangassou, where around 2,000 Muslims have been sheltering in a Catholic church since violence in May. The Church is surrounded by mainly Christian anti-balaka militia who are threatening to kill them. Fighting in other nearby towns has led to the deaths of at least 60 people in the last two weeks.

Many people are blaming France for the violence, because they withdrew the French peacekeeping mission Sangaris earlier this year, as we reported a few months ago. There is a UN force is known as MINUSCA, which stands for Multidimensional Integrated Stabilization Mission in the Central African Republic.

French general Dominique Trinquand, the former chief of the military mission to the United Nations, said:

The problem is that the UN troops alone are not mobile enough, meaning that when you’ve got an incident somewhere, they’ve got to intervene, but they usually are too late, after the killing of people there has happened. But Sangaris was ready to intervene with helicopters, very quickly and so it was a sort of a safeguard for the UN forces inside the country.

The other important point is that a UN force is fine, but when you have soldiers who are not able to interact with the population then you’ve got a problem. A lot of the soldiers inside the UN force are not French speakers, and so they’re not able to discuss with the people and to have the right information in order to react very quickly.

French troops have been recalled back to France, for Operation Sentinelle, after France was hit by a string of terror attacks. Radio France Internationale (RFI) and Al Jazeera and ReliefWeb

Under-Secretary-General for Humanitarian Affairs, Stephen O’Brien warned that he’s seeing “the early warning signs of genocide,” and that various armed groups “have the intention to ethnically cleanse” the country of their enemies. According to O’Brien:

It was clear to me that the growth of intercommunal violence, this pretense, perhaps it’s sincere, I don’t know, of using ethnic and confessional identity as a cause for killing, brutality, torture, threatening behavior, that these were the early signs, the early warning signs, of what could rapidly turn into a genocide.

And we’re all now coming together to do what we can to urge greater presence of the UN for the protection of civilians in what is becoming a very rapid, flare-up in various parts of the southeast, central southeast, the east as well as the northwest of the Central African Republic. … We must act now, not pare down the UN’s effort, and pray we don’t live to regret it.

This may be a surprise to O’Brien, but it will not be a surprise at all to long-time readers of Generational Dynamics, as CAR is in a generational crisis war that peacekeepers will have little effect on, and so will not end until there is a devastating, explosive genocidal climax. Peacekeepers may get leaders to sign a peace agreement, which has already happened several times in the CAR war, but this is a war led by the people, not the leaders or politicians.

The actions of the French troops backfired. When the Muslim Séléka troops were disarmed, the Christian anti-balaka militias “rushed into the vacuum,” and began committing atrocities in 2014, for revenge against the Sélékas. Since then, both Christians and Muslims have been committing atrocities, and it has become a full-scale generational crisis war. Thousands have been killed, and millions have been displaced.

During 2014, the peacekeepers were able to bring the violence somewhat under control in Bangui, the country’s capital, but CAR is a huge country, and violence continued in various regions. The violence began to slow down because the country became effectively partitioned into Muslim and Christian regions, with millions of people fleeing from their homes.

However, the Séléka militias began an intra-Muslim “fraticidal” conflict. One faction was the Union for Peace in the Central African Republic (l’Union pour la Paix en Centrafrique, UPC), consisting mainly of militia from ethnic Fulani, who are cattle herders. The other faction was the Popular Front for the Renaissance in the Central African Republic (Front Populaire pour la Renaissance de la Centrafrique, FPRC), dominated by ethnic Gula and Runga who are farmers.

As I’ve described many times in Central African Republic, Rwanda, Burundi, Kenya, Sudan, South Sudan, and even America in the 1800s, is that in country after country, there a classic and recurring battle between herders and farmers. The farmers accuse the herders of letting the cattle eat their crops, while the herders accuse the farmers of planting on land that’s meant for grazing. If the farmers put up fences, then the herders knock them down.

So at the present time, you have sectarian clashes between Muslims and Christians, and you have ethnic inter-Muslim clashes between farmers and herders. There are millions of people involved, and the United Nations would like a few hundred peacekeepers to bring peace to all of them. This is a typical United Nations fantasy, completely out of touch with reality and the real world. The French apparently reached this conclusion last year, when they announced the pullout of their Sangaris mission.

As I’ve explained in the past, CAR’s last generational crisis war was the 1928-1931 Kongo-Wara Rebellion (“War of the Hoe Handle”), which was a very long time ago, putting CAR today deep into a generational Crisis era, where a new crisis civil war has already started. This war will not end until there’s an explosive, genocidal climax. Maybe O’Brien should learn a little history before he starts talking about the peacekeeping budget. Deutsche Welle and AFP and United Nations Humanitarian Agency and Human Rights Watch and Elizabeth Kendal blog (18-May)