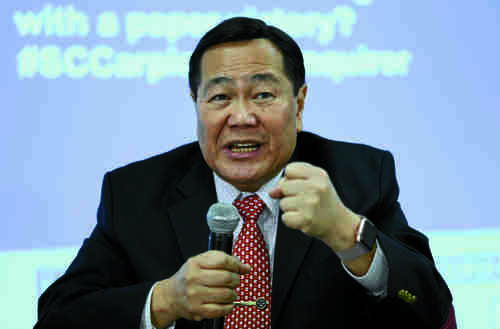 A statement by Philippines Supreme Court Senior Associate Justice Antonio Carpio warns that government must act in response to an “invasion of Philippine territory by China” in the South China Sea.

The warning was triggered when Rep. Gary Alejano said that the military reported early last week that Chinese vessels appeared to be massing north of Pag-asa Island (Thitu Island), a Philippine territory. The Philippines maintains a small population of about 100 people on Pag-asa Island in order to guarantee that it maintains its sovereignty.

The number and rapid coordination of naval and coast guard ships suggests that this was purposely organized in advance and was not just an ad hoc response by government vessels that happened to be in the area.

AMTI has repeated used satellite images to prove that China is continuing land reclamation activities, building artificial islands, and creating large military bases. These activities are all illegal under international law since July 2016 when a Tribunal at the United Nations Permanent Court of Arbitration in the Hague eviscerated all of China’s claims to the South China Sea. Since then, China has continued its criminal activities and has continued to annex regions of the South China Sea belonging to other countries, as Hitler did in 1939.

Your honors, in this venue, I announce my separation from the United States. Both in military… not maybe social, but economics also, America has lost. I will be dependent on you.

I’ve realigned myself in your ideological flow and maybe I will also go to Russia to talk to Putin and tell him that there are three of us against the world — China, Philippines and Russia.

Americans are loud, sometimes rowdy. Their larynx is not adjusted to civility.

And that statement was made at a time when Barack Obama was president, not Donald Trump.

At the time of that statement, I said this new relationship would not last long because the Philippine people like and trust the United States, while they dislike and distrust China. Duterte’s statement has been highly controversial in the Philippines, and Duterte has been forced to backtrack in some ways.

Ever since then, it has been official government policy that China and the Philippines are friends. That is why Foreign Affairs Secretary Alan Peter Cayetano ridiculed the concerns about Chinese vessels massing near Pag-asa Island, saying “China is not the enemy of the Philippines.” ABS-CDN (Manila) and Asia Maritime Transparency Initiative (AMTI)

Carpio was part of the team that won the Hague Tribunal ruling last year that declared illegal China’s activities in the South China Sea.

According to Philippine media, there are now known discussions at the US Pentagon about putting the contested Scarborough Shoal under the 1951 Philippine-US Mutual Defense Treaty, which requires each party to defend the other in the case of an external attack on its territory. Rapplier (Manila) and Asia Times and Inquirer (Manila)