China and India made surprising announcements on Monday that they had agreed to pull back troops to reduce tension on Bhutan’s Doklam Plateau.

For almost three months, China and India have each had 300 soldiers just 100 meters apart on the plateau, 3,000 meters above sea level. India did not increase its troop strength on the plateau itself, but brought troops into bases nearby, and raising the alert level in preparation for war.

The border dispute involving China, India, and Bhutan over the Doklam Plateau continued to escalate for a long time, as we reported. China attempted to annex the region, which belongs to Bhutan, and on June 16 sent Chinese troops and construction workers to begin road construction. Bhutan troops tried to prevent the Chinese troop incursion, but they were overrun. India sent in its own troops, saying that it did so when Bhutan invoked a treaty with India and asked for help, resulting in a standoff.

China made increasingly vitriolic threats towards India, saying that there could not be negotiations until India unilaterally withdrew its troops and that China’s army would destroy India’s army if India did not withdraw.

So now it turns out that there have been secret negotiations going on for weeks, despite the vitriolic threats.

Q: We have learned that on the afternoon of August 28, the Indian border troops and equipment that illegal crossed the Sikkim sector of the China-India border have all been withdrawn to the Indian side, marking an end to the trespassing incident. Do you have more information?

A: On June 18, the Indian border troops illegally crossed the well-delimited China-India border in the Sikkim Sector into China’s Dong Lang area. China has lodged representations with the Indian side many times through diplomatic channels, made the facts and truth of this situation known to the international community, clarified China’s solemn position and explicit demands, and urged India to immediately pull back its border troops to the India’s side. In the meantime, the Chinese military has taken effective countermeasures to ensure the territorial sovereignty and legitimate rights and interests of the state.

At about 2:30 p.m. of August 28, the Indian side withdrew all its border personnel and equipment that were illegally on the Chinese territory to the Indian side. The Chinese personnel onsite have verified this situation. China will continue fulfilling its sovereign rights to safeguard territorial sovereignty in compliance with the stipulations of the border-related historical treaty.

Hua received additional questions, pressing her to explain whether China had also pulled back. She apparently became increasingly annoyed and the questions, and finally answered:

A: The Indian side has withdrawn all its trespassing border personnel and equipment to the Indian side. The Chinese personnel onsite have verified this situation. China will continue fulfilling its sovereign rights to safeguard territorial sovereignty in compliance with the stipulations of the border-related historical treaty. In light of the changes on the ground, China will accordingly make necessary adjustments and deployment.

In recent weeks, India and China have maintained diplomatic communication in respect of the incident at Doklam. During these communications, we were able to express our views and convey our concerns and interests.

On this basis, expeditious disengagement of border personnel at the face-off site at Doklam has been agreed to and is on-going.

Many unanswered questions about the China-India Doklam agreement

The two announcements leave many questions unanswered, including the following:

Once again, we have to point out that China is a highly militarized country, with a huge army and bristling with missiles, and it has lied repeatedly and continuously about its claims and criminal activities in the South China Sea, and so there is no reason to believe any claims they make about Bhutan’s territory on the Doklam Plateau.

My personal belief, based on all the reports that I have read, is that China was completely surprised by what happened. I believe that China expected to overwhelm Bhutan’s army and annex the Doklam Plateau quickly and easily. Instead, I believe that the Chinese were completely surprised by India’s intervention, making a quick and easy victory impossible. New Delhi TV and India Today 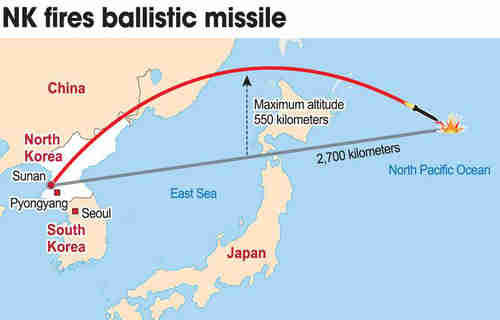 North Korea on Tuesday fired a long-range ballistic missile that flew over Japan, traveling more than 2,700 km with a maximum altitude of around 550 km. Technically, that’s an act of war, but Japan didn’t try to shoot it down, nor did the United States.

The North Korean missile that was launched passed over our nation and landed in the Pacific Ocean. The government had been monitoring the launch from the moment it was fired.

We have done our utmost to ensure the safety of the people. The missile that passed over our nation represents the greatest and gravest threat to our nation ever. It is also a threat to the peace and stability of the Asia-Pacific region.

This reckless act of launching a missile that flies over our country is an unprecedented, serious and important threat.

North Korea has been trying to develop a ballistic missile with a nuclear payload since the 1990s, and international attempts have been made to dissuade further development. However, diplomacy has not worked, sanctions have not worked, threats of retaliation have not work, and Security Council resolutions have not worked. Government leaders in many countries – the US, Russia, China, South Korea, and so forth – have made delusional statements about negotiations with North Korea, but they have repeatedly failed.

So one choice now is to accept North Korea as a full-fledged nuclear power, using nuclear weapons for all sorts of international blackmail. The other choice now is a military option of some kind. One way or the other, the question should be answered within a few months. Korea Times and Australian Financial Review and Reuters and South China Morning Post (Hong Kong)