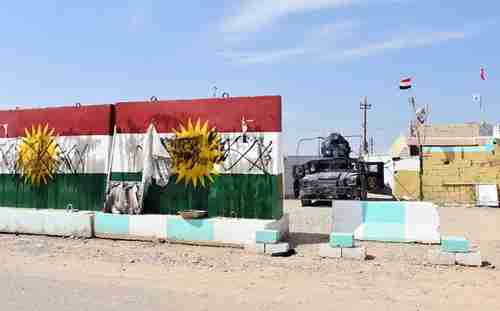 The Kurdistan Regional Government (KRG) says that Iraqi army troops and fighters from the Shia Popular Mobilization Unit (PMU, Hashd al-Shaabi) militias are massed on the border of the city of Kirkuk, which has been controlled by the Kurdish Peshmerga militias since 2014, when they evicted the so-called Islamic State (IS or ISIS or ISIL or Daesh) from the city. There have already been some conflicts between Iraqi troops and Peshmerga in villages south of Kirkuk in the last few days.

The KRG ran an independence referendum on September 25, and the vote among the Kurds for independence was above 90 percent. This referendum was internationally condemned before, during and after the vote took place because it created unrealistic expectations.

Now that the referendum has been successful, the Kurds want to be rewarded for all they did in defeating ISIS. They want independence and, in particular, they want to keep Kirkuk. They say they want it for its symbolic value, but it is more likely that they want it because it is sitting on a huge amount of oil. This oil is a big part of Kurdistan’s economy. It is currently going through a pipeline through Turkey to the Black Sea, but Turkey, which does not want an independent Kurdistan, is threatening to close the pipeline.

With Iraqi army and Shia militia troops massed on the Kirkuk border, KRG says that Iraq’s government has set a deadline of early Sunday morning for the Peshmerga to withdraw from positions being held in Kirkuk. As of this writing on Saturday evening ET, that deadline has passed.

The United States is keeping close watch on the situation by means of overflights. Both Secretary of State Rex Tillerson and Defense Secretary Jim Mattis have been urging both sides to keep focused on fighting ISIS, not each other. Mattis said on Friday:

We have to work on this. The Secretary of State has the lead, but my forces are integrated among these forces, and they are working, too, to make certain we keep any potential for conflict off the table. …

We are trying to tone everything down and to figure out how we go forward without losing sight of the enemy, and at the same time recognizing that we have got to find a way to move forward.

Everybody stay focused on defeating ISIS. We can’t turn on each other right now. We don’t want to go to a shooting situation.

As everyone has been saying for months, all the various armies and militias fighting ISIS in Iraq and Syria would have nothing better to do than start fighting each other, once ISIS was defeated. In Iraq, ISIS has been evicted from Mosul and other major cities. The Kurds, the Iraqi army, and the Shia militias achieved a great victory, and now they’re going to celebrate by killing each other. AFP and Kurdistan 24 and Bloomberg and Rudaw (Kurdistan)

The eviction of ISIS from Raqqa, their former stronghold in Syria, is almost complete. The US-backed Syrian Democratic Forces (SDF), consisting mostly of Syrian Kurdish fighters, are permitting dozens of buses to evacuate the remaining ISIS fighters and their families, along with about 400 civilians to be used as human shields. The SDF, backed by US warplanes, have been fighting ISIS in Raqqa.

According to the SDF, the buses will take the surrendered fighters further east to Deir az-Zour province, much of which remains under ISIS control.

The evacuation deal was pursued by the United States military as a way to allow the SDF to secure the last parts of the city, without requiring bloody house-to-house fighting that would kill hundreds of civilians. According to a US-led coalition statement:

The arrangement is designed to minimize civilian casualties and purportedly excludes foreign Daesh [ISIS] terrorists as people trapped in the city continue to flee the impending fall of Daesh’s so-called capital.

People departing Raqqa under the arrangement are subject to search and screening by Syrian Democratic Forces.

With ISIS defeated in both Iraq and Syria, the analyst Sami Hamdi, editor of International Interest, gave a concise analysis of what can be expected next, in an interview on Al-Jazeera (my transcription):

In Iraq you have the Popular Mobilization Units (PMUs) that terrify the Sunni population, who were marginalized in the first place, and whose villages constituted the haven in which ISIS operates.

In Syria you still have a dictatorial regime hell bent on crushing its people’s democratic desires.

You have the Kurdish who are pursuing independence. You have the Russians who are terrified of an American-leaning state. You have the Iranians who wish to establish hegemony in the region.

There is nothing to suggest that there will be a reintegration of these communities into mainstream society. And this leads to one outcome — a division within the region, new borders, a modern Kurdistan, and other areas seeking their own independent autonomous states.

When we talk about the defeat of ISIS we should be wary. ISIS on the ground will be defeated. Losing Raqqa will be a big blow to them. But ISIS in the political discourse will continue.

Because as long as there is an ISIS in the mainstream media and political discourse, Iran can justify keeping the Revolutionary Guards in Syria.

As long as there is an ISIS in Syria, Turkey can justify military force to restrict Kurdish movement.

As long as there is an ISIS, Russia can continue to keep its troops in Syria, on the pretext of fighting terrorism.

As long as there is an ISIS, the Popular Mobilization Units can claim legitimacy to stay as an ultra-violent military force outside of military control.

So ISIS will be defeated militarily, it might resort to guerrilla tactics, but politically in the discourse, it’s not quite time for the international powers to shelve the topic of ISIS and pursue other interests.

In neighboring Deir az-Zour province, the army of the Syrian regime captured the ISIS stronghold of Mayadeen. Telegraph (London) and CNN

As we have been reporting in the last few days, Turkey has deployed tanks and troops into Syria’s Idlib province, with the objective of bringing peace to the Idlib “de-escalation zone.” Turkey’s incursion is part of an agreement reached with Iran and Russia in Astana, Kazakhstan, in July.

However, now Syria’s Foreign Ministry is demanding that Turkey withdraw its forces, something that would almost certainly result in renewed fighting in Idlib, particularly between the al-Qaeda linked Hayat Tahrir al-Sham (HTS) and other anti-Assad Sunni rebel militias, many of whom are opposed to the presence of HTS.

According to the Syrian statement:

Syria condemns in the strongest terms the incursion of units of the Turkish army in Idlib province, which constitutes a flagrant aggression against the sovereignty and security of Syrian territory.

The Turkish aggression is not tied in any way with the understandings that were reached between the guarantor states in the Astana process, but constitutes a violation of these understandings.

The Syrian government has in the past expressed opposition to the entire “de-escalation zone” agreement, but the agreement was forced on Syria’s president Bashar al-Assad by Russia’s government. Al-Assad has announced that he expects to regain control of all of Syria, and few people doubt that if given the opportunity, he would like to bomb all of Idlib province into oblivion, killing hundreds of thousands of innocent civilians, including women and children, as he did last year in Aleppo.

The Astana agreement is supposed to bring about a ceasefire throughout Syria, and bring peace. However, as the saying goes, “Peace is that brief, glorious moment in history when everybody stands around reloading.”

As regular readers know, Generational Dynamics predicts that the Mideast is headed for a major regional war, pitting Sunnis versus Shias, Jews versus Arabs, and various ethnic groups against each other. Generational Dynamics predicts that in the approaching Clash of Civilizations world war, the “axis” of China, Pakistan and the Sunni Muslim countries will be pitted against the “allies,” the US, India, Russia and Iran. Anadolu (Ankara) and Deutsche Welle and Russia Today