North Korea released photos and video of its new missile on Thursday, showing what appears to be a larger and more powerful version of its previous top-shelf ICBM, the Hwasong-14.

Analysts have debated whether the new vehicle is enough of a generational improvement to merit the new Hwasong-15 designation North Korea has given it, but a spokesman for South Korea’s Joint Chiefs of Staff said his country’s analysis of the photos “showed that there were clear differences between the Hwasong-15 and Hwasong-14 in terms of the looks of the warhead, the joint of the first and second stages of the missile, and overall size.”

Reuters quotes Michael Duitsman of the Center for Nonproliferation Studies agreeing with the South Korean analysis, saying, “This is a very big missile. And I don’t mean ‘Big for North Korea.’ Only a few countries can produce missiles of this size, and North Korea just joined the club.”

“The first stage seems to use essentially the same case but has two engines. The second stage looks like it can carry more than twice as much propellant. The combination of those two things means it really is a new, more capable missile,” said David Wright of the Union of Concerned Scientists, comparing the new vehicle to the Hwasong-14.

“They wanted to hit all of the U.S., and they wanted something big to hit it with. This seems on the surface level to be that missile,” said David Schmerler of the James Martin Center for Nonproliferation Studies, as quoted by CNN.

A U.S. intelligence official added that the test launch “appears to demonstrate a more powerful North Korean solid-fuel propulsion system, especially in its second-stage rocket.” Among other advantages, solid-fuel rockets can be launched more quickly than those using liquid fuel.

The New York Times cites analysts who believe the second engine nozzle in the first booster stage and greater fuel capacity of the second stage appear to give the Hwasong-15 much greater range than its predecessor, dispelling theories that the Wednesday launch was essentially a stunt in which a slightly modified Hwasong-14 was given a lighter test payload so it could fly higher.

The photos published by North Korea indicate that the weapon has a mobile launch system, although U.S. intelligence analysis of the Wednesday launch indicates it was conducted from a fixed position, not a mobile platform. Contrary to dictator Kim Jong-un’s claim that the new missile is “100 percent” produced by North Korean industry, the mobile launch truck appears to be a modified version of a vehicle provided by China.

Perhaps most disturbingly, the new missile has a larger, blunter nose cone design that appears to indicate North Korea has made progress toward reliable reentry shielding—one of the last pieces of nuclear ICBM technology they do not yet possess.

The BBC notes that the “vast size” of the Hwasong-15, comparable to the American Titan II missile from the Cold War, cannot be overstated: 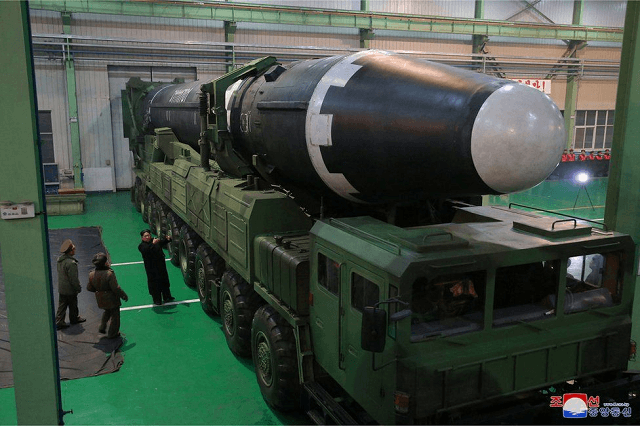 “A jubilant Mr Kim is seen in many of the pictures, grinning as the rocket takes off. The missile’s steep trajectory can be seen on screens in the background, apparently charted in real time,” the BBC reports, wryly noting that Kim has a habit of walking around giant fuel-laden missiles while puffing on cigarettes in publicity photos.

CNN quotes a North Korean official who said that more tests would be coming soon, including the long-threatened above-ground “large-scale hydrogen bomb” test.