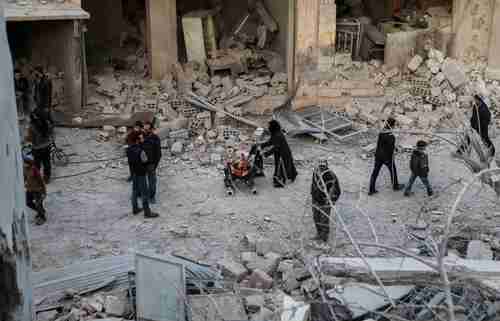 Whenever I write about the Syrian war “peace process,” I always use the word “farcical” to describe the peace talks. And this always turns out to be correct, as the “peace process” always falls apart with days or weeks, for reasons that were completely obvious at the time that the peace talks were held.

The core problem is always the same. As I have described in story after story, Syria’s president Bashar al-Assad is a delusional psychopath, a Shia/Alawite who will never let the war end until he has exterminated all his Sunni enemies, which will never completely happen. As long as Bashar al-Assad is in power, Syria’s civil war, including the war crimes, the airstrikes and barrel bombs targeting women and children in schools, hospitals and marketplaces, and the use of Sarin gas and industrial strength torture on civilians, will never end.

When representatives from both sides attended, the two sides did not actually talk to each other. Instead, de Mistura led negotiations with the cute name “proximity talks.” What this means is that the representatives from the two sides sit in separate rooms, and then de Mistura walks back and forth between the two rooms, carrying messages back forth. It must be hilarious to watch.

This week’s Geneva peace talks were attended by both sides, but the opposition representatives are taking the position that there must a transition that removes al-Assad from power. The al-Assad representatives could not tolerate even being in just the same building with opposition representations saying that al-Assad must go, even in the context of proximity talks where the two sides would never have to see or hear each other, and so the Syrian delegation walked out of the talks on Saturday.

So, the Geneva talks are supposed to continue until December 15. Let’s watch and see if silver-tongued Staffan de Mistura can convince Bashar al-Assad to send his delegation back to the peace conference before the peace conference ends in total farce. Reuters and The National (UAE) and Foreign Affairs (29-Nov)

The second series of “peace talks” have been taking place in Astana, Kazakhstan, and were attended by Russia, Iran, and Turkey. These were pretty farcical from day one because they were not attended by the actual belligerents in the war, the Bashar al-Assad regime and the representatives of the opposition. So any agreements reached in Astana were signed by Russia, Iran, and Turkey, but not by the people on the ground actually fighting.

The main agreement to come out of the Astana peace talks was the implementation of “de-escalation zones” or “de-confliction zones” in Syria. In four regions of western Syria, there would be an enforced ceasefire, and the ceasefire would be guaranteed by Russia, Iran, and Turkey, providing whatever troops are necessary for the functioning of the checkpoints and observation posts as well as the administration of the security zones.

Well, needless to say, Bashar al-Assad never agreed to these de-escalation zones, but it has always been his objective to completely exterminate all his Sunni opposition enemies, so there was never any hope that the de-escalation zones would succeed. However, he did go along with them temporarily, because they freed up his army to attack the opposition in other areas.

Last year, the al-Assad regime, backed by Russia, conducted an extremely bloody war of extermination against the civilian residents of Aleppo, with numerous war crimes. Al-Assad claimed that the battle of Aleppo was “history in the making”:

This was totally delusional on the part of al-Assad, which is not surprising since he is a delusional psychopath. History was made in Aleppo by the sheer number of war crimes committed by Syria and Russia. If the so-called “liberation of Aleppo” is remembered, it will be for the total destruction of the city.

Eastern Ghouta was attacked by the al-Assad regime in 2013 with Sarin gas. There has been almost continuous bombing since then. In the last three weeks, the regime, backed up by Russia, has substantially stepped up the attacks, with massive airstrikes on markets and densely populated residential areas, killing dozens or hundreds of people.

Eastern Ghouta is part of one of the de-escalation zones that were agreed to at the Astana talks. Opposition officials say that the zones were meant as a charade to divert attention from the heavy daily bombing of civilian areas. That seems to be the case.

According to the United Nations, there are about 400,000 civilians who are under siege in Eastern Ghouta. Aleppo only had a population of about 250,000, and so Syria and Russia have a lot more women and children to kill, so that will be going on for several months.

After that, al-Assad can make another delusional speech about how clever he is to have killed hundreds of thousands of innocent people. At any rate, between the farcical Geneva peace talks and the farcical Astana peace talks, there is no end in sight for Syria’s civil war, as long as Bashar al-Assad is in power. Reuters and Le Point (Paris) and NRTTV (Kurdistan)