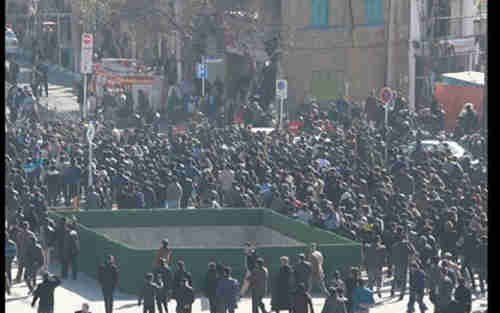 A small Thursday protest in northeastern Iran against the economic policies of Iran’s president Hassan Rouhani has spread on Friday to become a general anti-government protest in cities across Iran. The protesters are now targeting not just Rouhani, but the entire regime of Supreme Leader Seyed Ali Khamenei.

Egg prices in Iran had doubled since last week, due to the government’s culling of millions of chickens diagnosed with avian flu. Unemployment stood at 12.4 percent in this fiscal year, according to the Statistical Centre of Iran, up 1.4 percent from the previous year. About 3.2 million Iranians are jobless, out of a total population of 80 million.

Rouhani had promised that the economy would improve significantly after Iran reached the nuclear deal with America and the West, because of the removal of economic sanctions. However, the money that was derived from the removal of sanctions has been wasted on government corruption and foreign wars.

The slogans being chanted by protesters in different countries have been collected by the People’s Mojahedin Organization of Iran (PMOI / MEK), an organization led by Maryam Rajavi advocating the removal of the hardline Iranian regime. Some of the slogans are listed below.

The original protests on Thursday were about the economy and government corruption:

By Friday, they had morphed into general anti-government and anti-regime protests:

This uprising has tolled the death knell for the overthrow of the totally corrupt dictatorship of the mullahs, and is the rise of democracy, justice and popular sovereignty.

The four-decade record of the mullahs’ rule has been nothing but inflation, poverty and corruption, torture and execution, killings and aggression. The bulk of the people’s wealth, including the money released in the nuclear deal, is either spent on repression and export of terrorism and war, or is plundered by the regime’s leaders. The overthrow of the religious fascism is the first step to get out of the crisis that is intensifying every day.

The mullahs’ regime has no future; investment on it is doomed to failure, and it is time for the international community to not tie their fate to this regime and recognize the Iranian people Resistance to overthrow that regime.

Ms. Rajavi’s statement is interesting, because it is almost formulaic in being similar in tone to screeds by American anti-war activists in the 1960s and 1970s, and indeed to screeds by anti-Donald Trump politicians today. Payvand (Iran) and Bloomberg and Deutsche Welle and Al Arabiya

As I’ve been writing for years, Iran’s population is behaving like a typical country in a generational Awakening era. This is one generation past the previous generational crisis war, in this case, the 1979 Great Islamic Revolution and Iran/Iraq war that climaxed in 1988.

America’s last generational Awakening era was the 1960s-70s, one generation past the end of World War II. There was a “generation gap” pitting the traumatized survivors of World War II versus the Boomers who grew up after the war and were not traumatized. There were student riots, long hot summers, the Summer of Love, bra-burning, anti-war protests, Kent State shootings, all culminating in the Awakening era climax, the resignation of Richard Nixon in 1974.

We don’t know when it is going to happen, but Iran is headed for a similar climax. Perhaps it will be on the death of the current 79-year-old Supreme Leader, or perhaps it will be based on some sort of electoral change, as happened with Richard Nixon.

In the late 1990s, college students in these younger generations started holding pro-Western and pro-American protests, during Iran’s generational Awakening era. Khamenei and the Iran hardliners brutally suppressed those protests, but doing so did not change minds. Today, those students are 30-40 years old and have risen to positions of power, ready to take over when the current hardline leadership dies off. And by the way, this is also true within the ranks of the Islamic Revolutionary Guards Corps (IRGC).

They are generally pro-Western and pro-American and consider Saudi Arabia to be an existential threat. This is one of several reasons why I have been saying for years that, in the approaching Clash of Civilizations world war, Iran will be an ally of the United States, along with Russia and India, versus China, Pakistan, and the Sunni Muslim countries.

There was a serious split between hardliners and moderates in Iran’s government after the 2009 presidential elections, when young people were protesting, and there was blood running in the streets because Iran’s security forces were massacring students and other protesters. Khamenei wanted the security forces to be completely unleashed, so they could kill, torture, rape, jail, and bash anyone they wanted with impunity, while the moderates in the government wanted to permit peaceful protests, and wanted the jailed protesters to be released.

Iran’s government was extremely embarrassed by its violent response to peaceful protesters in 2009, and want to avoid a repeat, as indicated Friday by hardline cleric Ayatollah Ahmad Alamolhoda:

If the security and law enforcement agencies leave the rioters to themselves, enemies will publish films and pictures in their media and say that the Islamic Republic system has lost its revolutionary base in Mashhad.

So Iran’s government is in a quandary. The protests are small now, although they are a lot more widespread than the 2009 protests, which were mainly limited to Tehran. If the protests fizzle out by themselves, then all will be well for the time being. But if the protests grow in the next days and weeks, then the government will be forced to crush them, and as Alamolhoda says, world media will be filled with pictures and video of blood running in the streets of Tehran, as in 2009. BBC and Iran Front Page and Reuters