With ISIS collapsing, US forces will remain in Syria to restore ‘normalcy’ 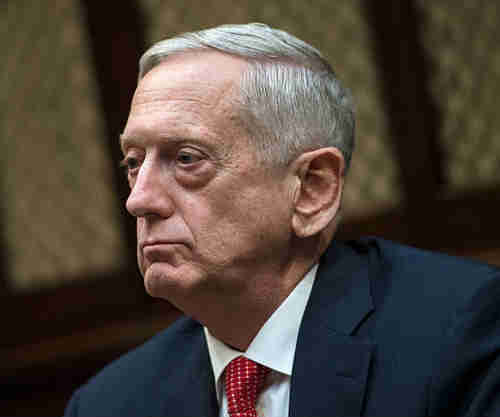 According to Pentagon estimates, there are fewer than 1,000 fighters from the so-called Islamic State (IS or ISIS or ISIL or Daesh) left in eastern Syria, down from several thousand just a few weeks ago. This is largely through the efforts of the mostly Kurdish U.S.-backed Syrian Democratic Forces (SDF), which have focused their efforts on eradicating remnants of ISIS.

The Pentagon in the past has said that U.S. forces would remain in Syria “as long as we need to” and, on Friday, U.S. Defense Secretary Jim Mattis gave an outline about how the role of U.S. forces will be changing in 2018, following the collapse of the self-declared ISIS caliphate in Raqqa.

According to Mattis, ISIS is on the run, with some remaining ISIS fighters in the Middle Euphrates River Valley:

As we sit here today at the end of 2017, the caliphate is on the run, we’re breaking them.

We are in the process of crushing the life out of the caliphate there, while trying to keep the innocent people safe – which is very hard with this group.

It [ISIS] is less inspirational when they have lost their physical caliphate; it is less inspirational as the stories of what it was like living under their rule come out. I think it is a brand with a diminishing appeal, but the appeal is still there for those who go in for that philosophy.

Mattis said the time is right for “an attempt to move toward normalcy,” by operations like clearing IEDs, and ensuring peace and stability:

What we will be doing is shifting from what I call an offensive, terrain-seizing approach, to a stabilizing [approach].

You’ll see more U.S. diplomats on the ground. When you bring in more diplomats, they’re working that initial restoration of services. They bring in the contractors. That sort of thing, There’s international money that’s got to be administered so it actually does something and doesn’t go into the wrong people’s pockets.

The approximately 2,000 U.S. troops in Syria would stay and provide security for the diplomats and civilians, as well as help with training and aid in efforts to hunt down IS fighters. Dept. of Defense and VOA and CNBC

The regime of Syria’s president Bashar al-Assad is demanding that U.S. forces leave Syria completely, and is calling the U.S. presence “illegal.”

But according to Mattis, there is a demarcation line between the forces of the al-Assad regime and its ally Russia on one side, and the Syrian Democratic Forces and the coalition forces on the other side:

This is the demarcation line, and we’ve said that we will operate on one side, the Russians on the other. And we’re still taking ISIS down. Nothing has changed.

It hasn’t come up. They’re not even trying it. So I’m not concerned.

Well, right now, it’s a mistake if somebody does it. So it’s not a warning to anybody.

Despite the implied warning by Mattis, al-Assad says that the Kurds are “traitors,” and he wants his army to attack them and possibly to exterminate them. The al-Assad regime currently controls about 55 percent of Syria, and Kurdish forces control about 28 percent.

Turkey also considers the Kurds in the SDF to be “terrorists” and wants to see their role reduced. Furthermore, Turkey has recently called Bashar al-Assad a “terrorist.”

It appears that, in addition to eliminating the remaining 1,000 ISIS fighters, the remaining 2,000 US troops in Syria will have the job of protecting the Kurds from the Turkish and al-Assad forces. Critics of Friday’s announcement by Mattis claim that it’s a prescription for open-ended mission creep. AFP and Jerusalem Post and Rudaw (Kurdistan) and Eagle Online