Iran gives operational control of its Chabahar seaport to India 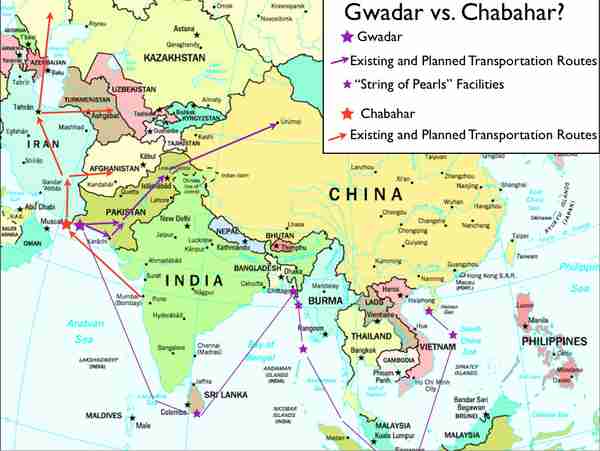 During a visit by Iran’s president Hassan Rouhani to India on Saturday, Rouhani and India’s prime minister witnessed the signing of nine agreements to expand bilateral economic ties, with focus on the development and utilization of Iran’s strategic Chabahar Port. Iran would grant operational control of a portion of the port to India for 18 months.

In return, India has agreed to invest an initial $87 million growing to a total of $2 billion in the Chabahar and in the Chabahar-Zahedan railroad linking the port to the Trans-Iranian railway and to other cities in Iran, connecting from there to Afghanistan, Central Asia, and Eastern Europe.

The use of the Chabahar is considered to be a major “game-changer” for India’s economy and defense. Any land route from India to Afghanistan and Central Asia is blocked by Pakistan and China. The route from India’s Kandla seaport to Chabahar and then overland to Afghanistan and Central Asia would not be as good as a pure land route, but it’s better than anything that’s been available up till now.

Chabahar is also a counter to China’s development of the Gwadar port in Pakistan, shown by the large purple star in the map above. The China-Pakistan Economic Corridor (CPEC), coupled with China’s One Belt-One Road (OBOR), is seen by Indian defense analysts as a major security threat. The purple lines in the map above show China’s traditional trade routes across the sea, using China’s “String of Pearls” port facilities (purple stars), while the red lines show the trade routes being planned using Iran’s Chabahar port. Mehr News (Iran) and Business Standard (India) and VOA and India Defense Review (20-Mar-2017)

The two ports are about 90 km apart. However, unlike Chabahar, Gwadar is better strategically located in the Indian Ocean, so that India vessels would also be subject to the active monitoring by Pakistan’s navy and probably China’s navy.

Gwadar seaport is much larger, thanks to Gwadar’s natural layout and depth. The maximum planned capacity of Chabahar is 10-12 million tons per year, while that of Gwadar will be 300-400 million tons.

Security is a major issue for both ports. Chabahar is located in one of Iran’s most volatile regions, frequently attacked by the Taliban-linked Jundullah terror group. Gwadar is located in Pakistan’s Balochistan province which has also been targeted by Taliban-linked terrorists, as well as by a Baloch insurgency.

Iran has special issues related to the U.S. and the Iran nuclear deal, which is opposed by the Donald Trump administration. The U.S. has threatened additional sanctions on Iran, and those sanctions to conflict with India’s investments in Chabahar. However, U.S. Secretary of State Rex Tillerson, visiting New Delhi recently, assured India that even if America re-imposes sanctions on Iran in the coming days, it will exempt the Chabahar facility.

As regular readers are aware, Generational Dynamics predicts that in the approaching Clash of Civilizations world war, the “axis” of China, Pakistan and the Sunni Muslim countries will be pitted against the “allies,” the U.S., India, Russia, and Iran. The Chabahar seaport deal moves these countries another step closer to that alignment. Asia Times and World News Report (India) and Bloomberg Quint and Diplomat and Indian Express (25-Nov-2017)