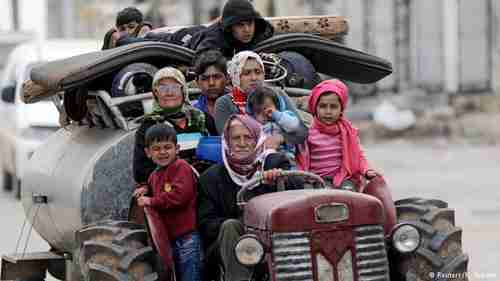 Syrians flee from airstrikes and shelling of village near Afrin (Reuters)

Turkey’s president Recep Tayyip Erdogan said on Wednesday, “We have got a little closer to Afrin. I hope that Afrin will, God willing, have completely fallen by the evening.”

Erdogan was alluding to Operation Olive Branch, the military operation that began on January 20 with the objective of taking control of the northeastern Syrian city of Afrin from the Kurdish People’s Protection Units (YPG/YPJ). Originally, Erdogan promised that the operation would be completed by the end of January.

The YPG is linked to the Kurdistan Workers’ Party (PKK), which has been conducting a violent insurgency in Turkey for three decades and has performed multiple major terrorist attacks in major Turkish cities in the last three years. The PKK is considered a terrorist group by the US and the EU.

The operation was not completed by Wednesday evening as Erdogan hoped but, on Thursday, Turkey’s presidential spokesman said:

Over 70 percent of Syria’s Afrin region has been secured during Operation Olive Branch.

The circle has been completely tightened around the terrorists. We predict that the center of Afrin will be completely cleared of terrorists within a short period of time. They wanted to make Afrin a new Qandil. This [desire] has been eliminated through Operation Olive Branch.

The phrase “new Qandil” refers to the Qandil mountains in Iraq where the PKK has its headquarters.

In order to complete the mission, Turkish forces have been bombarding the city with airstrikes and artillery shelling, to the extent that many people are beginning to compare the Turkish assault on Afrin to the ferocity of the attack on Eastern Ghouta by the army of Syria’s president Bashar al-Assad, backed up by Russian warplanes. However, al-Assad has been regularly dropping barrel bombs packed with explosives and metal and laced with chlorine gas onto civilian neighborhoods and markets in order to kill as many women and children as possible. Erdogan so far has not been taking similar steps in Afrin.

Still, the bombs and artillery have taken their toll, to the point where there is a fear of a full-scale humanitarian crisis. There are 350,000 people living in central Afrin and, in just the last 24 hours, some 30,000 civilians were forced to flee from their homes, according to the Syrian Observatory for Human Rights. The water supply has been cut off, and a siege has prevented food and medicines from entering the city, except for just one UN humanitarian aid convoy in early March.

There has been total silence from North Korea on the planned summit meeting between Donald Trump and North Korea’s child dictator Kim Jong-un. There have been no articles or commentary in the North Korean press. There is no word that North Korea is making any preparations for a summit, even though the initial invitation from Kim, sent through the South Koreans, was that Kim “wanted to meet urgently” with Trump.

There has been no sign that the North Koreans want to go ahead with the summit, whether urgently or not. When I first wrote about the planned summit, one of the things I speculated about was that Kim had extended the invitation expecting it to be rejected, or at least expecting any acceptance to be burdened down with a bundle of preconditions that would never be met. That meant that the invitation was not real, but was a negotiating ploy intended to humiliate Trump. But then Kim must have been surprised when Trump accepted the invitation immediately, without preconditions, although some preconditions were added later.

The first possible sign that some preparation is being made occurred on Thursday, when North Korea’s foreign minister Ri Yong Ho paid a surprise visit to Sweden. However, the purpose of the meeting has not been announced, except to discuss the security situation on the Korean peninsula.

Meanwhile, North Korea is continuing to stall, in order to give itself breathing space to complete development of its nuclear weapon and long-range ballistic missile program. There is no doubt that development work continued during the Olympics games, and that it is continuing to this day.

Instead of meeting “very urgently,” perhaps Kim just wants to stall further, and delay the meeting as long as possible, until his weapons program is a fait accompli. LA Times and CNN