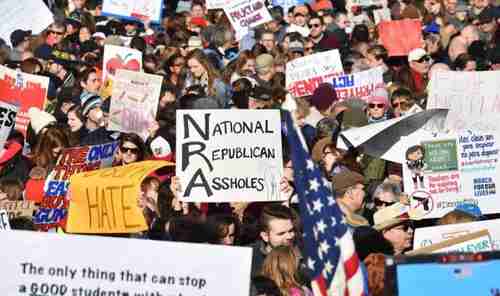 Saturday’s “March for our Lives” rallies were national and international. The current generation of high-school students held a spectacular coming-out party on Saturday, as millions of students and their families flooded into Washington and cities around the world. For many of the kids, this must have been the most exciting and thrilling day of their young lives.

So the first thing to understand is that these kids are not Millennials. People born since 1999 are in a new generation, the next generation after Millennials, called the Pivotal Generation (because they are pivoting away from the Millennials), or often called “Generation Z” (a name they hate).

The recent school shooting in Florida has triggered a rather spectacular entrance by the Pivotals into national politics, and they are driving politics in several new directions that differ from the Millennials.

Democrats completely co-opted Saturdays “March for our Lives” rallies by excluding any high school student from speaking who took any position contrary to the positions of the Democratic party leadership. Thus all the political messages were pro-gun control, anti-Republican, anti-National Rifle Association (NRA), and opposed to any solutions proposed by other parties, such as gun violence restraining orders, arming school resource officers, and updating instant criminal background checks.

However, the kids in the Pivotal Generation do not by any means hold positions matching those in the Democratic Party. As for getting gun control enacted, they are tilting at windmills. Within a few months, the Pivotals will be on to a new and even more exciting issue, and this issue will be forgotten. NBC News and March for Our Lives web site and Zero Hedge

The rise of the Pivotal Generation (Generation Z)

The attitudes of the Pivotals are not anti-NRA at their core. The Pivotals are pro-security, especially school security. The rallies were called “March for our Lives,” not “March to kill the NRA.” Since there is really no solution to the school security problem, they allowed their rally to be co-opted by the anti-NRA stance because it is the only thing they understand. However, the pro-security policy is much more right wing than left wing.

Research on the Pivotals during the last year or two has revealed three major themes in their political beliefs:

In generational theory, a “regeneracy event” is an event that regenerates civic unity and unifies the country behind the country’s leader for the first time since the end of the preceding generational crisis war (WW II in this case). A regeneracy event today might be, for example, a North Korean nuclear weapon ballistic missile attack on Los Angeles. With their demand for total security and willingness to work for success, the Pivotals in case of war would combine into a powerful patriotic force willing to do whatever is necessary to fight for the nation. They will truly be the next “Greatest Generation.”

Whatever events unfold in the future, the Pivotal Generation is pivoting away from Millennials and other generations and is adopting a unique set of attitudes and behaviors that will end up being a surprise to everyone, including both political parties. Barkley US and Barkley US (PDF) and Reno Gazette and Inc

According to the U.S. government Census Bureau:

The term “baby boomer” refers to individuals born in the United States between mid-1946 and mid-1964 (Hogan, Perez, and Bell, 2008). Distinctions between the baby boom cohort and birth cohorts from preceding and subsequent years become apparent when fertility measures are framed within a historical context. The baby boom in the United States was marked by a substantial rise in birth rates post-World War II. Two features of the baby boom differentiate this increase from those previously experienced: the size of the birth cohort and the length of time for which these higher levels of fertility were sustained.

In other words, many couples held off having children during the Great Depression and World War II, but as soon as the war ended they started having children as quickly as possible.

Generally speaking, you have to be about four years old to be aware of what is going on in the world, and so for generational theory, the earliest birth year for the Boomers is not 1946, but is 1942. Anyone born earlier (the Silent Generation) would likely have been traumatized by World War II, and anyone born later would likely not have even been aware of World War II. That is why I do not use the phrase “born after WW II” to describe the Boomers. Instead, I use the phrase “growing up after WW II.”

The Silent Generation is the one preceding the Boomers. They got that name in an interesting way. They were originally called the “Depression Babies,” obviously because they were born just before or during the Great Depression of the 1930s. However, during the 1950s, Time Magazine began calling them the “Silent Generation,” and the name stuck.

The reason that Time called them the Silent Generation is because they never complained about anything. They had grown up during the Depression, they had seen their fathers, brothers, and uncles die gruesomely during the war, and by the 1950s they were happy to have families, jobs, and a home with a white picket fence. They did their jobs and worked patriotically to help rebuild the world after World War II.

The period after a crisis war like World War II is called a “Recovery Era,” since it is everybody’s job to help the nation and the world recover from the war.

The children in Generation-X grew up in a world that seemed like total chaos to them. There was rioting in the streets, males were burning their draft cards, girls were burning their bras, there was streaking, there was the Summer of Love in 1967, the riots at the Democratic convention in 1968, the killing of students at Kent State University, and a vast generation gap over the Vietnam war and race and environment issues.

Whereas the Boomers were pampered as children in the Baby Boom following WW II, the Gen-Xers were left mostly on their own and were definitely not pampered. Whereas the Boomers had a stable childhood with families and parents with jobs, the Gen-Xers were surrounded by social unrest and instability. In particular, feminist organizations were telling mothers to dump their husbands, and not let the kids see their fathers, in order to get as much money as possible. So many Gen-Xers grew up with no fathers, with a chaotic personal life, and a great deal of bitterness towards the Boomer generation, whom they blamed for their misfortunes. Without fathers and with no moral compass, they had a high delinquency rate, and are one of the most jailed generations in American history.

As I have described many times in the last 15 years, Generation-X got their revenge against their fathers by bringing about the financial crisis. In the 1990s. Gen-Xers got degrees in “Financial Engineering,” and used their skills in the 2000s to knowingly create trillions of dollars’ worth of fraudulent subprime mortgage-backed securities, which they could sell to the parents’ generation to get revenge. The result was that millions of people when bankrupt and lost their homes.

The Awakening Era began in 1963 and ended in 1983. That was followed by the “Unraveling Era,” where all the rules and institutions that had been implemented in the 1950s to prevent another Great Depression and another World War were dismantled. This resulted in the “tech bubble” of the late 1990s and the huge “credit bubble” of the mid-2000s decade.

The Unraveling Era was a period of opulent wealth in the hands of many people – mainly because they went deeply into debt and spent the money on cars, vacations, and other items of conspicuous consumption.

The Unraveling Era began in 1983 and ended in 2003, 58 years after the end of World War II. 2003 was the beginning of the new “Crisis Era.” The birth years for the next generation, the Millennial Generation, was thus 1979 to 1999. Millennials grew during this period of opulence provided by astronomical debt, many Millennials developed the attitude that money and success could just be given to them.

The financial crisis brought this period of opulence to an abrupt end. The Pivotal Generation, which grew up during this period, pivoted away from the Millennials and adopted that attitude that it is necessary to work hard for money and success.

Incidentally, the name “Pivotal Generation” is only temporary. Just as the “Depression Babies” became the “Silent Generation,” the Pivotal Generation will be given a new name by society at some point in the future, after they have actually accomplished something, rather than just giving press conferences in Washington. US Census Bureau (PDF) and Pew Research