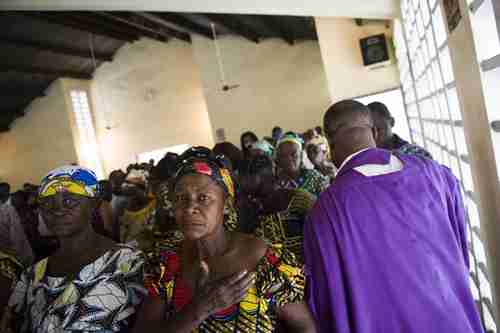 The next presidential election for the Democratic Republic of Congo (DRC) is scheduled for December 23. International leaders are demanding that President Joseph Kabila step down and let the elections be free and fair, demands that there is little possibility he will meet.

Joseph Kabila was supposed to step down as president when his mandate ran out on December 19, 2016. Instead, he pulled a breathtaking stunt late in 2016 by doing nothing to prepare the country for new elections and then claiming that he could not step down because there were no elections to select a president to replace him.

This stunt triggered large riots and a threat of civil war in DRC, but the Catholic Church intervened and brokered an agreement: Elections would be held in December of 2017 to choose Kabila’s successor, and this time Kabila would really step down. However, the agreement was a farce: It was signed by members of Kabila’s government, but it was not even signed by Kabila himself. It was pretty clear throughout 2017 that Kabila would not honor the agreement.

So now we supposedly have a commitment for an election in December of this year.

Leaders of African countries almost uniformly refuse to criticize Kabila, mainly because many of them are just as corrupt as Kabila is. However, Botswana’s president Mokgweetsi Masisi has become the first (and perhaps the only) African leader to take a stand and criticize Kabila. This year, Botswana’s government issued a statement openly blaming Kabila for DRC’s deteriorating humanitarian and security situation.

And last week, Masisi said in an interview,

The president of the DRC has stayed in power longer than the time that was expected. Hopefully we can get from (Kabila) a real commitment to not attempt to come back to power by whatever means.

However, as we have been reporting for months, there is no possibility whatsoever that Kabila will step down.

Kabila and his family own, either partially or wholly, more than 80 companies and businesses in the country and abroad. He and his children own more than 71,000 hectares (175,444 acres) of farmland. His family owns diamond mines, a part of the country’s largest mobile phone network, companies that mine mineral deposits, gold and limestone, a luxury hotel, stakes in an airline, a share of the country’s banks, and a fast-food franchise. This is pure criminal corruption by Kabila and his family.

With tentacles reaching into so many businesses, it is not surprising that Kabila is willing to use any method – massacres, atrocities, jailings, torture – to stay in power. If he were to step down, he would probably be arrested or else shot and killed, rather than writing a book and going on tour as Western leaders do when they step down.

As in 2016, the Catholic Church is taking on Kabila. This year, the church organized protest events in DRC’s capital city Kinshasa. They were violently broken up by Kabila’s police using live rounds and tear gas, and at least 15 people were killed.

Kabila’s attacks on the Catholic Church are only a small part of the violence that he is causing. In the past, I have written about the bloody wars in the southwestern Kasai region, where the armies and militias reporting to the government of President Joseph Kabila are committing genocide; about the bloody tribal wars in northeastern Kivu region, causing massive refugee flows into Uganda; as we reported in February, another a humanitarian disaster of “extraordinary proportions” emerged in Tanganyika province in southeastern DRC. The genocide by Kabila’s army has resulted in 3.9 million people forced to flee their homes to escape the violence. Hundreds of thousands have fled to Zambia, Angola, and other neighboring countries as refugees, creating a humanitarian disaster in those countries. Reuters and Irin (1-Feb) and Ozy (29-Mar) and Reuters (23-Jan)

DRC’s Joseph Kabila is rumored to be preparing a referendum to amend the constitution to allow him to remain in power into the 2030s. Leaders of Rwanda and Uganda have already arranged for their countries’ constitutions to be amended in a similar way.

Burundi’s president Pierre Nkurunziza, who calls himself the “eternal supreme guide” of Burundi, has set May 17 as a date for a national referendum to change the constitution to permit him to stay in office until at least 2034.

According to Human Rights Watch, Nkurunziza is using violence to guarantee that the referendum will pass. This violence includes beatings, arrests, jailings, and torture.

Nkurunziza should have stepped down as leader in 2015, since the constitution limits any leader to two terms. When Nkurunziza announced that he would run for a third term, his police force used bullets, tear gas and water cannons to control the protests. He is expected to continue to use as much force as necessary to rig the May 17 elections and guarantee that the referendum will pass.

I remember a time, 15-20 years ago, when I knew almost nothing about any African country. Well, I knew a little about Egypt, South Africa, Morocco, and a few other countries, but not much. That is why, in the last ten years, I have made a point to learn as much as I can about African countries. And in almost all of them, the story is the same: massive corruption, massive government violence, ethnic and tribal violence. African leaders have been promising democracies but, instead, we see one leader after another using violence to stay in power in order to protect his cronies who have been stealing money from the treasury, often money that the West provided in aid. That is why, after forty years and billions of dollars in Western aid, ordinary African people are just as poor as they were forty years ago.

As in the case of DRC, we can expect more violence in the form of killings, torture, rape, arrests, jailings, beatings, and anything else necessary for the corrupt politicians Kabila and Nkurunziza to keep themselves in power.

From the point of view of General Dynamics, many leaders follow exactly the same patterns following a generational crisis civil war between different tribes or ethnic groups. After the war ends, the leader of the country, usually from the winning tribe or ethnic group, refuses to give up power, and becomes increasingly violent and authoritarian, using as an excuse that peaceful protests or negative news articles can turn into a new civil war. This excuse provides justification for mass slaughter, rape, torture, mass jailings, mutilations, and so forth. I have described this behavior in Bashar al-Assad in Syria, who has gone to the extent of using Sarin gas and barrel bombs packed with explosives and metal and laced with chlorine gas onto civilian neighborhoods and markets in order to kill as many women and children as possible. Other leaders that I have described exhibiting this type of behavior include Hun Sen in Cambodia, Paul Biya in Cameroon, Robert Mugabe in Zimbabwe, Pierre Nkurunziza in Burundi, Paul Kagame in Rwanda, Yoweri Museveni in Uganda, Robert Mugabe in Zimbabwe, and Joseph Kabila in DRC. East Africa Monitor and Human Rights Watch and AFP