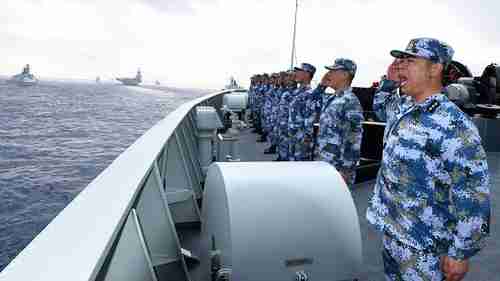 China has once again escalated its massive military occupation of the South China Sea by deploying offensive anti-ship cruise missiles and surface-to-air missiles systems. The missiles are being deployed on the artificial islands that China constructed in violation of international law, as the United Nations Permanent Court of Arbitration in the Hague ruled that all of China’s activities in the South China Sea are illegal.

According to military analyst Gregory Poling, it means that China will soon be deploying warplanes to the area:

This should be seen as China crossing an important threshold. Missile platforms present a clear offensive threat. [The missile deployment] is a pretty clear threat to the other claimants and furthers China’s goal of establishing complete control over the water and airspace of the South China Sea.

Even before this latest deployment, Navy Admiral Philip S. Davidson told the Senate that China already has the military power to control the entire South China Sea, and only war would be able to stop this:

China’s development of forward military bases in the South China Sea began in December 2013 when the first dredger arrived at Johnson Reef. Through 2015, China used dredging efforts to build up these reefs and create manmade islands, destroying the reefs in the process. Since then, China has constructed clear military facilities on the islands, with several bases including hangars, barracks, underground fuel and water storage facilities, and bunkers to house offense and defensive kinetic and non-kinetic systems. These actions stand in direct contrast to the assertion that President Xi made in 2015 in the Rose Garden when he commented that Beijing had no intent to militarize the South China Sea. Today these forward operating bases appear complete. The only thing lacking are the deployed forces.

Once occupied, China will be able to extend its influence thousands of miles to the south and project power deep into Oceania. The PLA will be able to use these bases to challenge U.S. presence in the region, and any forces deployed to the islands would easily overwhelm the military forces of any other South China Sea-claimants. In short, China is now capable of controlling the South China Sea in all scenarios short of war with the United States.

As Davidson points out, China has repeatedly lied and hid its true intentions. Originally, the artificial islands were going to be for tourists and scientists, which was a lie. Then the military installations would be purely defensive, which was another lie. And now they’re part of a massive militarization in anticipation, when preparation has been completed, to launch a full-scale war on America and its allies.

According to an article last month in Chinese media, China is close to announcing how much of each country’s territory it plans to annex:

A precise continuous line will split the Gulf of Tonkin between China and Vietnam, go south into waters claimed by Malaysia, take a U-turn to the north along the west coast of the Philippines and finish at the southeast of Taiwan.

China has repeatedly hidden its intentions, and will continue to do so until it’s prepared to launch its attack. China is following exactly the same path that the Nazis followed. Xi Jinping’s “Socialism with Chinese Characteristics” is the same as Hitler’s National Socialism. Like the Nazis, the Chinese believe that they’re a Master Race that will conquer the world. They’d have to be crazy to believe that they could succeed at that, but the Chinese are crazy.

I frequently like to quote Friedrich Nietzsche, who said, “Insanity in individuals is something rare – but in groups, parties, nations and epochs, it is the rule.” The Chinese will not be the Master Race that rules the world. Instead, they’ll do exactly what the Nazis did—bring destruction and catastrophe to themselves and the world. CNBC and the Diplomat and Newsweek (20-Apr) and US Senate (PDF, 17-Apr) and South China Morning Post (22-Apr) 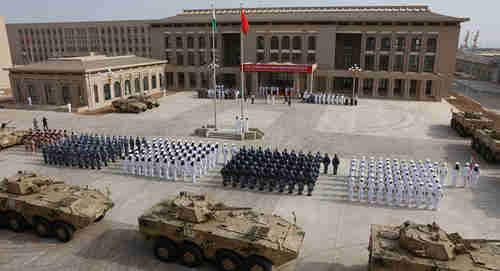 Opening ceremony of China’s military base in Djibouti, August 1, 2017 (AFP)

China’s belligerent military actions in the South China Sea are being repeated as well in the horn of Africa.

Chinese military personnel are using high-grade blinding lasers to target American pilots and American military crews flying over Djibouti in northeast Africa (the horn of Africa), according to the Pentagon.

There were several incidents in the past several weeks. No one has lost his life, but several Americans have received eye injuries.

The Americans are stationed in Djibouti at the Camp Lemonnier naval base which is the primary base of operations and logistics hub for missions across Africa. It supports approximately 4,000 U.S., joint and allied forces military and civilian personnel and defense contractors.

Camp Lemonnier was built in 2001, but is now being challenged by a new Chinese base in Djibouti, built in 2017. The US has formally protested to China’s government, and “requested” that China launch an investigation of the situation.

As we reported last month, there is a parallel development in progress. Djibouti’s strategic port at the entrance to the Red Sea is the Doraleh Container Terminal. A Dubai firm, DP World, had been operating the terminal since 2006, when DP World had signed a 30 year contract.

Whether in the South China Sea or Djibouti, China constantly lies and hides its intentions. China has been attacking American pilots and flight crews with high-powered lasers. We have to assume that this is not some rogue Chinese soldier, but is actual policy of the Chinese military, presumably to test out their laser systems in preparation for war. CNN and Washington Examiner and the Washington Post