There’s been so much going on in recent weeks that it’s hard to remember that the biggest story in the world is the rapid rise of China.

Yes, it’s fascinating to see what’s happening with the Trump-Kim Summit in Singapore, or at the Trump vs. Trudeau Smackdown in Canada, or to peek into the the bottomless Swampathon of Washington, DC.  Yet still, while it’s not always atop the headlines, the most consequential story of the age is the rise and rise of the People’s Republic.

And perhaps the fate of a city in Brazil serves as a parable as to what could be looming for our American republic.  Virgil will get to that scary parable in a moment, but first, let’s consider the latest news.

An Artful Deal with China—But Artful for Whom?

On June 12, China’s telecom giant ZTE announced it is resuming business operations, after having been staved off some U.S. sanctions that could have shut it down completely.  A bipartisan group of US Senators is still struggling to toughen up those sanctions, and so it’s unclear what will happen next, but it seems likely, in the end, that ZTE will wriggle out of the most serious possible punishment.  Which is to say, how long do you think it will be before ZTE is back up to its old tricks?

In other words, the Chinese seem to be showing that they understand, too, 交易的艺术—The Art of the Deal.

Of course, some were skeptical—even in surprising places.  For instance, also late last month, The Washington Post headlined, “China is winning Trump’s trade war.”  Yes, we know where the “Bezos Post” is coming from, but still, the story quoted a number of experts and politicians, all of whom argued that the Chinese are likely to be  unyielding on key trade issues, such as manufacturing exports and the protection of U.S. intellectual property (IP).  And the Post cited the administration’s own estimate that China is stealing between $225 billion and $600 billion worth of our IP each year.  We might pause to observe that it’s these matters of technological know-how that are the crux of national power—even national survival.

Interestingly, this somber realization is starting to penetrate Beltway thinking.  For instance, a recent headline atop Axios, the buzzy Beltway publication, was veritably Trumpian: “1 big thing: The greatest, growing threat to America.”  The article detailed China’s 2025 Plan, which calls for the country “to dominate all futuristic advanced technologies such as robotics, A.I., aviation and space, driverless or new energy vehicles.”  The conclusion is inescapable: If the Chinese beat us in all those categories, they beat us, period.

Of course, Donald Trump has been sounding exactly this alarm for decades, even when the bipartisan Establishment was swooning over the mirage of globalism.  Giving credit where credit is due, the author of the piece, Jim VandeHei—one of the most influential journalists in Washington, DC—added a note about the 45th President: “Trump showed you can turn China into a villain on trade.”  Looking beyond Trump, VandeHei added: “A smart politician could turn China into a unifying villain on virtually every topic—a reason to move fast and together on infrastructure, immigration, regulations, space, robotics, 5G and next-gen education.”

In other words, the threat from China could finally galvanize the U.S. to do the things that we should have been doing all along.

And so it was interesting to see that at the moment that the importance of technology was being acknowledged, the breaking news from the White House was about agriculture; on May 21, Trump tweeted the news:

China has agreed to buy massive amounts of ADDITIONAL Farm/Agricultural Products – would be one of the best things to happen to our farmers in many years!

Yes, undoubtedly the President is correct when he says that this deal would be one the best thing to happen to US farmers—and farmers and their farms are certainly important; we do, after all, have to eat.  However, as we have seen, the most profound concerns are elsewhere.  What matters most to our national destiny is tech, not ag.

Virgil doesn’t often find himself agree with Sen. Chuck Schumer, but the New York Democrat had a piercing point when he jibed soon thereafter:

China’s trade negotiators must be laughing themselves all the way back to Beijing.  They’re playing us for fools — temporary purchase of some goods, while China continues to steal our family jewels, the things that have made America great: the intellectual property, the know-how in the highest end industries.

Virgil will leave it to others to assess Schumer’s credibility on this issue; for sure, he seems more critical of Trump than he was of, say, Barack Obama.  And yet also for sure, he’s right about this much: The ultimate issue in national prosperity, even national survival, is know-how.  That is, do we know how to do something better than our economic and military rivals?  And a look back at history drills that point home—you have to stay ahead of the competition.

Nobody should ever make the mistake of thinking that anything about the economy is permanent. That is, the economy is always churning and changing; some players are winning, and some are losing. Moreover, the same holds true for society and, indeed, for history itself; one empire rises, another falls. And it’s hard to say that any country is immune, not even the United States. 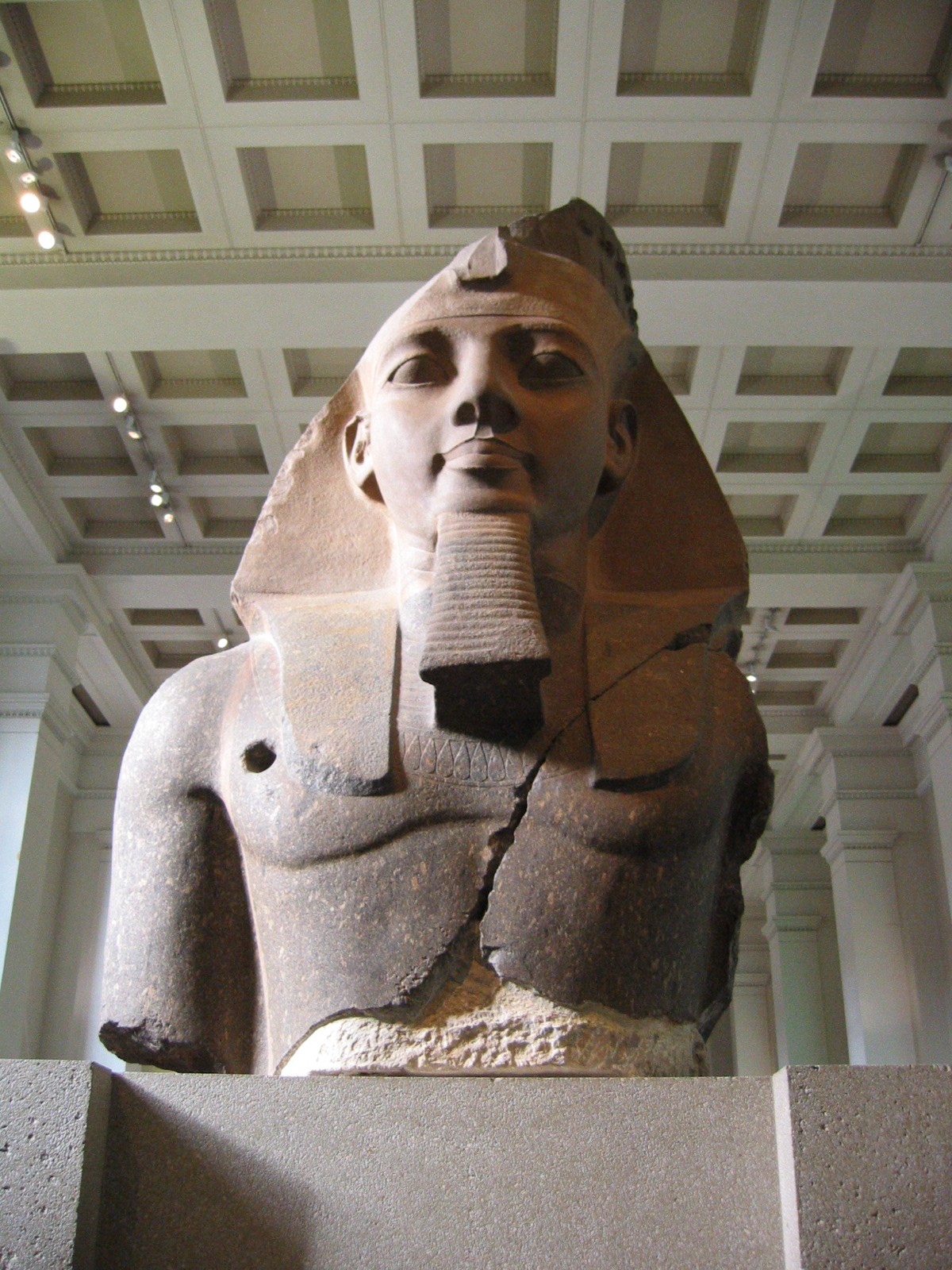 Colossal bust of Ramses II, the “Younger Memnon,” circa 1250 BC, The British Museum (Photo: Wikimedia Commons)

A classic expression of this waxing and waning is the 1818 poem by Percy Shelley,  Ozymandias.  That work describes a traveler trekking through the desert, coming across the remains of a once-towering statue:

And on the pedestal, these words appear:
My name is Ozymandias, King of Kings;
Look on my Works, ye Mighty, and despair!

The poem concludes on a somber note:

Nothing beside remains. Round the decay
Of that colossal Wreck, boundless and bare
The lone and level sands stretch far away.

Ozymandias, by the way, was a real king. His name is better known to us as Ramses II; he was a pharaoh in Egypt’s glory days, when Egypt was arguably the world’s leading civilization.  And yet now…

Such gloomy thoughts, about the death of kings and kingdoms, were brought to Virgil’s mind by a recent headline, “In Silicon Valley, Chinese ‘accelerators’ aim to bring startups home.”  The Reuters article details the efforts of the People’s Republic of China to invest in and learn from—some would say, steal from—the greatest U.S. tech firms.

We might emphasize Warner’s use of the word “illegal.” Why, he might even agree with the Trump administration’s estimate that China steals as much as $600 billion of our intellectual property every year.  In fact, that same day, May 17, the President himself declared, “We have been ripped off by China”—and this only hours before a visit to the White House by Chinese vice premier Liu He.

So what could happen to the US if this thievery continues?  Today, without a doubt, the US enjoys tech pre-eminence.  The largest of our tech titans, the so-called GAFA companies—Google, Apple, Facebook, and Amazon—have a total market capitalization of more than $2.4 trillion, vastly greater than that of the Chinese tech companies.

Of course, as we all know, China is catching up fast—in everything.  Just a decade ago, China’s GDP was less than a third of America’s, and yet if current growth rates continue—the U.S. at around 2 percent, and China at around 6.5 percent—China will overtake the U.S. in 2027.   If that projection proves true, then America’s tech edge could vanish just as surely as that statue of Ozymandias.

In fact, if we want a glimpse of what a possible future might look like, we might take a look at Manaus, Brazil.  That city’s bitter history illustrates what can happen when someone steals away your economic mojo.

Today, Manaus is just another Brazilian city, population 2.1 million.  And yet in the late 19th and early 20th centuries, it was one of the boom cities of the world, based on a supremely valuable product: rubber.

The peoples of the Amazon had long known that a viscous substance, latex, could be tapped from the Hevea brasiliensis tree; they had found occasional uses for it when it dried into rubber.

Yet natural rubber had a problem: It invariably turned gooey in the summer and brittle in the winter, and so it wasn’t good for much.  But all that changed after 1839, when the American inventor Charles Goodyear figured out how to “vulcanize”—that is, permanently weatherproof—latex rubber.

Goodyear’s vulcanization opened up new vistas for the use for rubber; it was now not just a curiosity, but a valuable commodity.   And so all of a sudden, in the mid 19th century, attention—and money—turned to the source of that rubber, the Amazon rain forest.  And in the middle was Manaus.  Thus that city fluked its way into a worldwide monopoly on rubber production.

Local land-owners—we might call them “Rubber Barons”—got rich quick, and then some.  And amidst the riotous luxury of life at the top—Manaus was said to lead the world in both diamond-purchasing and brothel-patronizing—a few noble and lasting structures were created, such as the Manaus Opera House.  When that grand edifice was completed in 1896, it ranked as one of the largest theaters in the world. 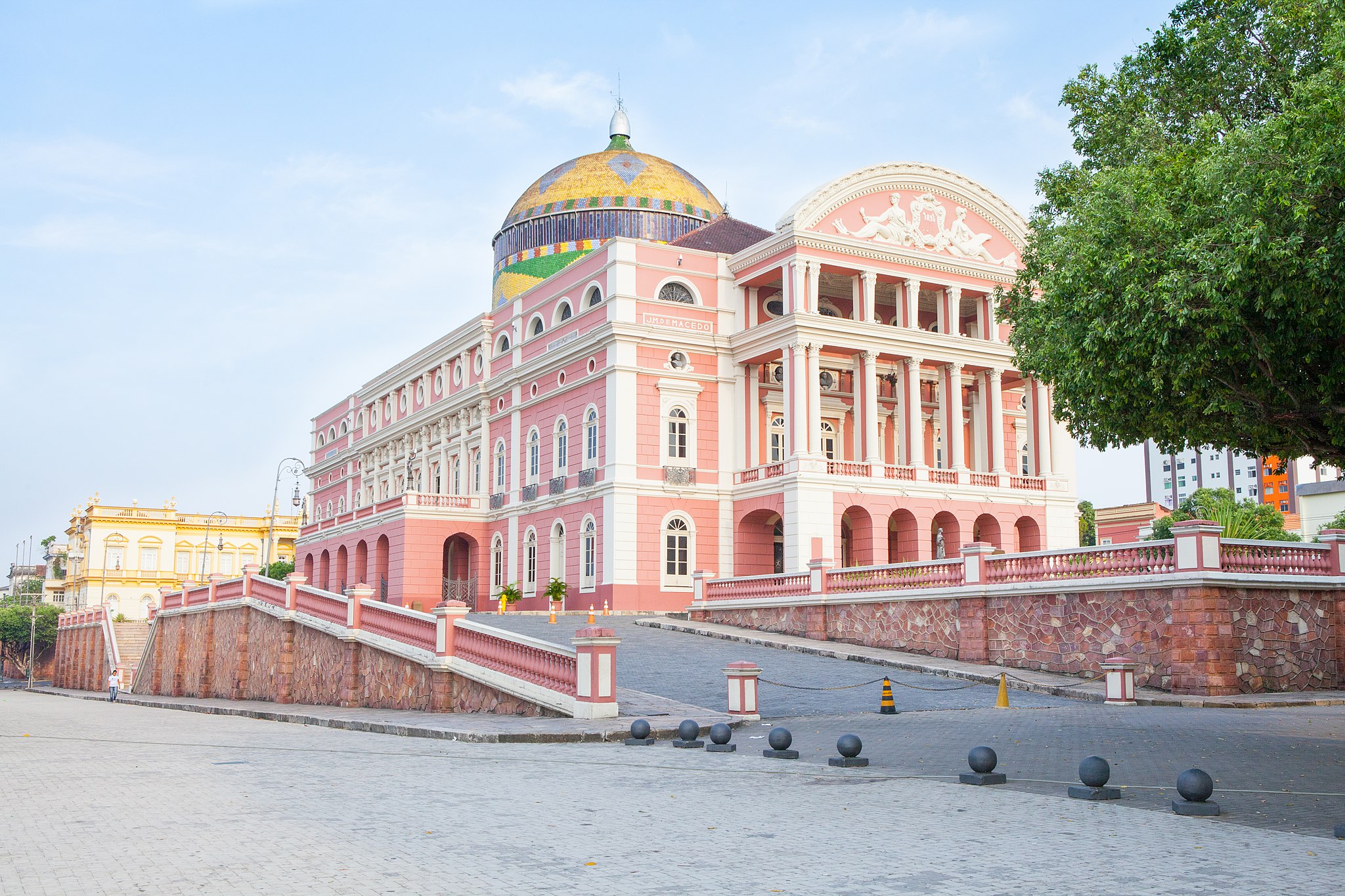 Yet then came nemesis for Manaus.  Just as the folks there were living it up, their competitive advantage was winding down.  Or, more precisely, it was sailing away across the Pacific, gone to Asia.

In 1876, a wily British agriculturalist, Henry Wickham, came to Manaus and left with 70,000 Hevea seeds.  His goal was profitable nationalism; he would take the seeds to a British colony and plant them there, so that rubber production could thrive under the Union Jack, not under the mostly green-and-yellow flag of Brazil.

It took a few decades to get the hang of rubber-growing in a non-native climate, but soon enough, British planters succeeded in growing rubber in two of their colonies, Ceylon (Sri Lanka) and Malaya (Malaysia).

Indeed the British, with their superior sense of industry, had actually improved on the Brazilians.  Whereas in Manaus the rubber workers simply went out into the wild looking for trees to tap, the Brits established efficient rubber plantations.

Thus Brazil lost its monopoly profits.  By 1910, Brazilian production had fallen to 50 percent of the world market; by 1918, it was down to 20 percent, and in 1940, it was barely more than one percent.  Manaus’ opera-house-building days were over.   (Since then, of course, synthetic rubber, a technology pioneered in the U.S. during World War Two, has taken over.)

Okay, so there you have the doomsday scenario: Silicon Valley could end up suffering the fate of Manaus, with the Chinese today playing the role of the British yesterday.

Virgil is not arguing that Silicon Valley could become another Manaus as the Chinese eat our lunch—at least not right away.  Yet over time, as we have seen, anything can happen.  Just as world history is full of rich empires that have fallen by the wayside—from ancient Egypt to dear old Rome—so, too, it is full of rich economies that fell, and couldn’t get up.

Of course, some will insist that the similarities between Manaus, then, and Silicon Valley, now, are much less than the dissimilarities.  That is, they insist, It can’t happen here.

To which there’s only thing to say: We’ll find out.

And of this much, Virgil is sure: The world has not seen its last Ozymandias.