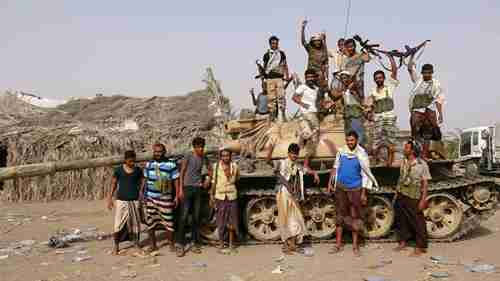 Large-scale ground operations, supported by the air and naval forces of the Saudi-led coalition, began to move in on Yemen’s port city of Hodeidah on Tuesday, with the objective of regaining control of the city from the Iran-backed Houthi rebels who captured it in 2015. The war in Yemen has been largely a proxy war between Saudi Arabia and United Arab Emirates (UAE) versus Iran since it began in 2015.

The internationally recognized government of Yemen is led by President Abdu Rabu Mansour Hadi, who has been hiding out in Saudi Arabia because of the war with the Houthis. While Iran backs the Houthis, Saudi Arabia and United Arab Emirates (UAE) support Hadi’s government.

According to a statement issued by Hadi this week:

The liberation of Hodeidah port is a turning point in our struggle to recapture Yemen from the militias that hijacked it to serve foreign agendas.

The liberation of the port is the start of the fall of the Houthi militia and will secure marine shipping in Bab al-Mandab strait and cut off the hands of Iran, which has long drowned Yemen in weapons that shed precious Yemeni blood.

The Saudis are hoping that the recapture of Hodeidah will force the Houthis to sue for peace in the proxy war. However, many others are not so sure, as numerous previous Saudi predictions of an end to the war have turned out to be false.

The great fear is that the urban fighting in Hodeidah will be a new catastrophe, in a repeat of the kinds of assaults that Bashar al-Assad conducted in Syria’s cities of Aleppo and Ghouta. In fact, the assault on Hodeidah may have to go on for weeks or months, just like the assaults on Aleppo and Ghouta. According to Lise Grande, the UN humanitarian coordinator for Yemen:

A military attack or siege on Hodeidah will impact hundreds of thousands of innocent civilians. In a prolonged worst case, we fear that as many as 250,000 people may lose everything – even their lives.

In fact, the ground forces being used by the Saudis have little experience in urban fighting. They consist of Emirati and Sudanese forces, as well as a combination of Yemeni groups – some loyal to President Mansour Hadi, others loyal to former President Ali Abdullah Saleh, and some advocates of Southern Yemen secession.

The fact that they include militias loyal to Ali Abdullah Saleh has some significance. Saleh used to be fighting on the side of the Houthis, and tribes loyal to Saleh were supporting the Houthis. However, the Houthis ambushed and killed Saleh in December of last year after Saleh, sickened by the massive war deaths, called on both the Houthis and Saudis to end the war, an act that the Houthis called betrayal. So now the tribes formerly supporting Saleh have switched sides from the Houthis to the Saudis, and this may be one of the reasons that the Saudis are hopeful that Hodeidah can be captured quickly.

Since the beginning of the war, the American and British governments have provided weapons and logistics support to the Saudis, and they continue to do so. However, both governments are pressuring the Saudis to reduce civilian casualties, and are warning the Saudis of the consequences of a potential humanitarian disaster. Middle East Eye and Australian Broadcasting and Brookings and Middle East Eye (12-Jun)

The war in Yemen sharply escalated three months ago, when the Houthis began attacking Saudi cities with missiles. The missiles have no guidance systems, and the Saudis were able to destroy many of the incoming missiles using defensive American-supplied Patriot missiles, but not all, as there have been some Saudi civilian casualties.

On Saturday, the Houthis fired a “projectile” into Saudi Arabia, killing three civilians. According to a Saudi military spokesman:

The terrorist Iranian-Houthi militia has targeted civilians with a projectile.

The Joint Forces Command of the coalition will strike with an iron fist all those who threaten the safety and security of Saudi nationals, residents and critical capabilities.

The Saudis fear that the Houthis will obtain sophisticated missiles with guidance systems from Iran. This is one of the reasons why they wish to take control of the Hodeidah port.

A Houthi statement warned commercial ships in the Red Sea, one of the world’s most important trade routes, to stay 20 miles from coalition warships or potentially face attack. Reuters and Middle East Eye (9-Jun)