Colombia’s conservative right clinched a decisive victory Sunday, handing the reins of the country over to now President-elect Iván Duque.

Duque’s victory over former Marxist guerrilla terrorist Gustavo Petro, a supporter of late Venezuelan dictator Hugo Chávez, was the culmination of half a decade of political organizing centered around the priorities of the nation’s rural heartland, and it provides a valuable lesson to politicians around the world that empowering the voices outside of the cities can sway the ideological compass of the nation.

Duque’s Democratic Center party, founded in 2013 as the brainchild of former president and current senator Álvaro Uribe, focused its message around law and order in rural mountainous territories ravaged for decades by the Revolutionary Armed Forces of Colombia (FARC), one of the world’s wealthiest terrorist organizations. The momentum Uribe harnessed stemmed from the heart of his native Antioquía, home to what was once the world’s drug capital, Medellín, which experienced a miraculous economic recovery during Uribe’s presidential term.

The Democratic Center’s organizational capacity and focus on the priorities of farmers – versus the emotional payoff of urban elites in supporting the FARC peace deal that won President Juan Manuel Santos the Nobel Peace Prize – ensured that Santos would barely lose a national referendum on that peace deal. But it guaranteed a landslide victory for Duque two years later, who had to campaign against a FARC candidate thanks to Santos’s imposition of the deal on the country, anyway.

The FARC has killed at least 200,000 people in its half-century of existence, not counting the untold forced abortions following the systematic rape of girl child soldiers and the 100,000 who were abducted and never found. The organization has largely survived due to the government of Cuba taking in its leadership when Uribe launched a U.S.-aided campaign against them inspired by the hunt for Osama bin Laden. With Uribe gone in 2010, Santos, his successor, told Colombians that their only hope for peace was to reintegrate the FARC into civilian society and allow the exiled leadership to come home. In October 2016, few believed Colombians would reject the deal.

Yet Uribe, Duque, and the Democratic Center team organized campaign rallies against the deal, spoke to the heart of the nation, and brought out the vote. The map of the 2016 plebiscite on the FARC deal speaks for itself: the conservative heartland did what it could to save the country.

The below map, via the National Colombian Registry and the University of Texas, shows the votes in favor of the peace deal in green and that against in orange. Antioquía, where Uribe served as governor in the 1990s (following the death of Pablo Escobar), was a solid “no.” The FARC’s home state, Tolima, also went against the deal. La Tebaida, located in Quindio state, rejected the peace deal even though “Timochenko,” the head of the FARC, was born there. It was a slim victory for the Colombian right, made possible by the states with the most first-hand knowledge of the FARC rejecting the deal.

Santos would go on to pass the peace deal through Congress without popular support, a move many on the right argued was a violation of Colombia’s constitution. He won the 2016 Nobel Peace Prize for his efforts.

Sunday’s vote shows a much friendlier map to Duque and Uribe’s interests, still centered around the country’s heartland. The below map, via Colombia’s El Tiempo, shows votes for Duque in blue and votes for Petro in purple. Every state that voted against the FARC deal voted for Duque. Bogotá, where Petro served as mayor, is the only purple dot in the center of the country. 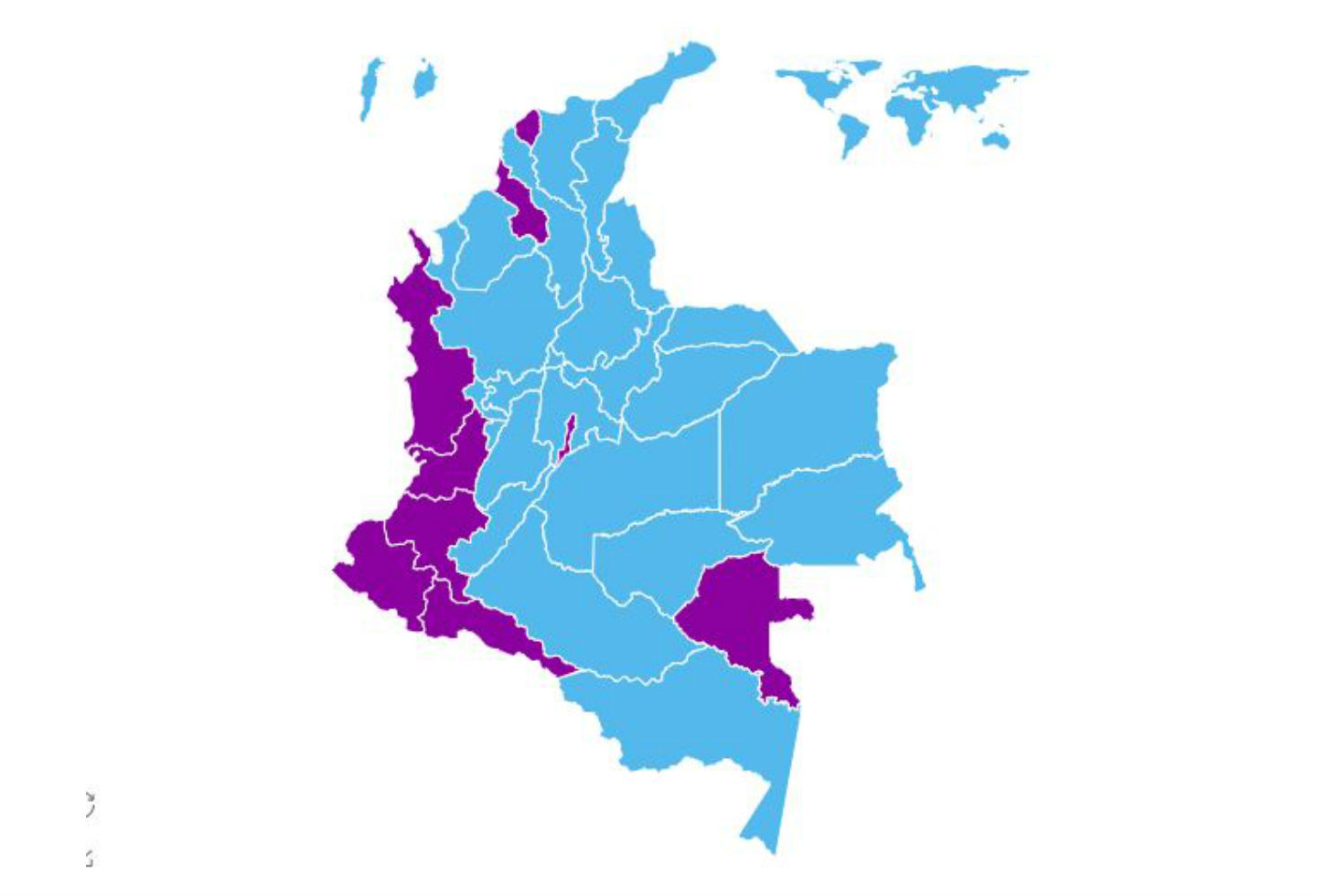 Petro, a progressive leftist, made two critical mistakes in his campaigning. In a Newsweek interview published in March, he refused to call Hugo Chávez, the late mastermind of the current state of Venezuela, a “dictator.” He had appeared in photos with Chávez. Petro was also unapologetic about his membership in the 19 of April Movement, a Marxist guerrilla group that demobilized as part of a peace agreement. That he personally benefited from a peace deal with terrorists took away much of the weight from his support for the FARC’s peace deal.

The FARC did not help Petro. 2018 was the first time they could field a presidential candidate and they chose “Timochenko” (FARC terrorists typically choose aliases when they join the organization). The Colombian people, mobilized largely by the Democratic Center leadership, welcomed “Timochenko” nearly everywhere he went with rotten eggs, stonings, and unspecified garbage. The FARC complained that he could not campaign because the voices of crowds yelling “rapist” and “murderer” drowned out “Timochenko’s” speeches. Quindio, the FARC’s hometown, experienced one of the loudest protests against his presence.

“Timochenko” bowed out of the race after suffering a heart attack. He did not cost Petro the election, but “Jesús Santrich” may have. Santrich is another senior FARC leader, poised to receive a free seat in the Colombian Congress as part of the peace deal. Santrich was arrested in April after U.S. prosecutors found evidence he was planning a $320 million cocaine sale.

Duque pounced. “The capture of Jesús Santrich proves that the FARC have not given up its narco-trafficking. Thanks to help from the United States, the capture occurred. Colombian authorities should also investigate other heads of the FARC with criminal ties,” he wrote on Twitter.

Petro, in contrast, demanded that Santrich’s case be taken to an unpopular special court for FARC crimes established by the peace deal.

Petro’s campaign was irreparably broken from the start, pandering to a Colombian left that barely exists. Yet without the Democratic Center’s organizational strength, disgusted voters would have just stayed home.

A 2016 academic study in the Spanish-language journal Análisis Político by professors Rodrigo Losada and Nicolás Liendo found that the Democratic Center succeeds – even back then, when it had yet to sway the FARC deal referendum – because it is a “single-issue party” focused on the only issue that matters to Colombians: not getting raped, kidnapped, or killed by a Marxist guerrilla:

[Of the five ideological pillars of the Democratic Center,] the first and easily most important above all is “democratic security.” This is understood before all else as a forward struggle against armed anti-government groups, but also as the fight against any form of criminality. The emphasis on this pillar is so great, particularly  on Uribe’s part, that the CD can be described as a single-issue party.

Given how widespread guerrilla activity has been in Colombia, it is surprising that no other political party … has focused its attention on it with the emphasis the CD has, particularly its leader [Uribe]. Beyond that, this emphasis, that has become Uribe’s principal election strategy, can explain much of [the party’s] electoral success.

Losada and Liendo’s surprise that no party would bother tackling the country’s biggest problem head-on should be no surprise to an American observer: Colombia’s elite – the people who grease palms and fund campaigns and build up the cities – do not have to deal with it. The elite audience is more interested in feeling good about itself by “forgiving” the FARC’s traumatized child soldiers and rotten leadership than it is in saving the lives of those who have to deal with the fraught reintegration of these terrorist elements into their society.

Similarly, the Colombian elite does not have to worry themselves with the growing socioeconomic stagnation Duque has pledged to fix with free market policies or the Venezuelan migrant crisis that has grown to such levels of concern that Santos sent a team to visit Turkey’s refugee camps for Syrians to learn how to build them. It is no surprise that those most likely to vote for Petro tended to be the Colombians furthest away from the Venezuelan border.

Santos leaves the presidency with a Nobel Peace Prize, but Santos leaves Colombia with an emboldened terrorist guerrilla, a stagnant economy, and Latin America’s most powerful conservative party. The continent’s right could learn much from how those realities are related.