Muslim terrorists from the Fulani herdsmen group in Nigeria used machetes and firearms to massacre more than 200 people in a predominantly Christian region over a two day period in June, a testament to the group’s growing lethality that has far surpassed Boko Haram’s.

Various news outlets identify the Fulani as “herdsmen” competing over resources ravaged by global warming with Christians who have instigated their demise by stealing the Muslim group’s cattle.

Breitbart News spoke to various analysts and experts who believe the Fulani are deserving of a sinister label beyond just “herdsmen.” The group carried out massacres across nearly a dozen villages in Nigeria’s Christian-majority Plateau state over the weekend of June 23-24, killing over 200. The estimated number of farmers who have been killed by Fulani terrorists so far this year varies between 1,750 and 6,000, including women and children.

The experts and analysts who spoke to Breitbart News agree that the Fulani are jihadis.

Dede Laugesen with Save the Persecuted Christians, a national coalition of Christian and Jewish faith leaders working to raise grassroots awareness in America about the mistreatment of Christ followers, noted, “Somehow the Fulani have gone from being recognized as the fourth most deadly terrorist group in 2015 to being simple ‘herdsmen.’ Why are ‘herdsmen’ armed with AK47s and who is arming them?”

Sam Rohrer, the president of American Pastors Network, provided Breitbart News with pictures that purportedly depict the carnage that ensued from the savage atrocities committed by suspected Fulani terrorists that fateful weekend this month.

The Fulani massacres on June 23 and 24 know no bounds as the pictures show dozens of butchered bodies allegedly cut open with machetes, riddled with bullets, and even burned alive. 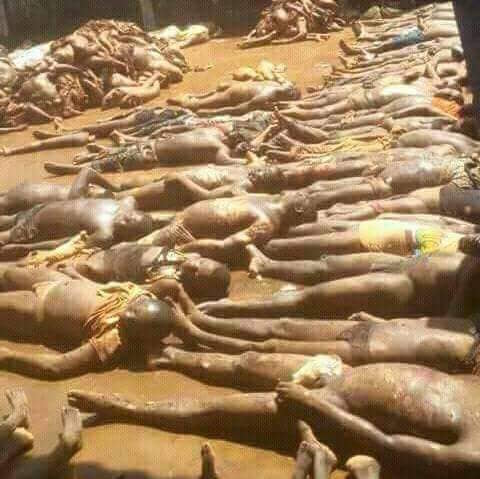 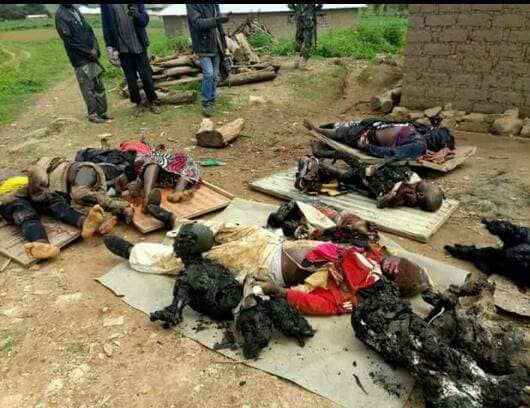 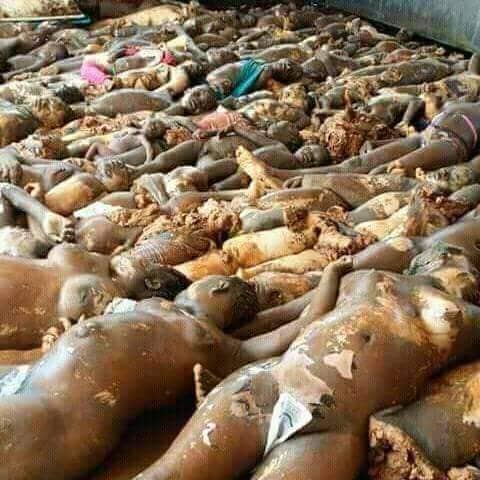 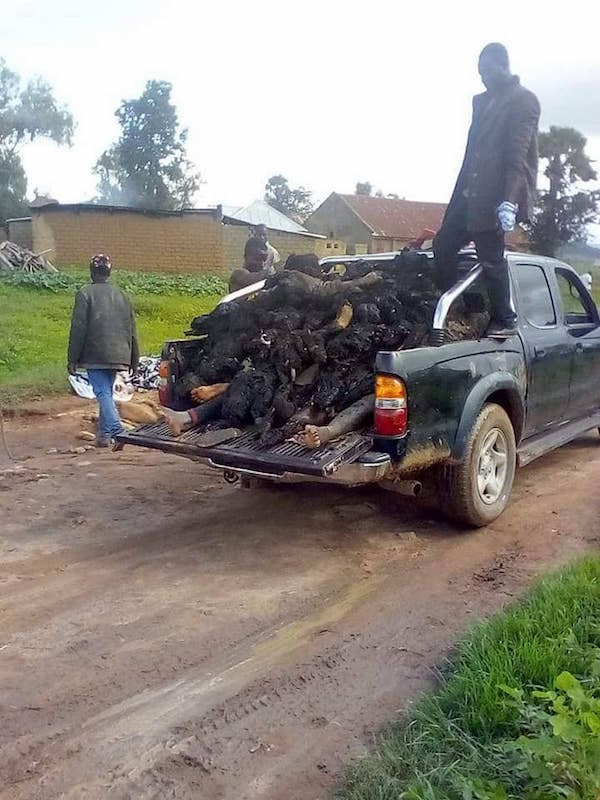 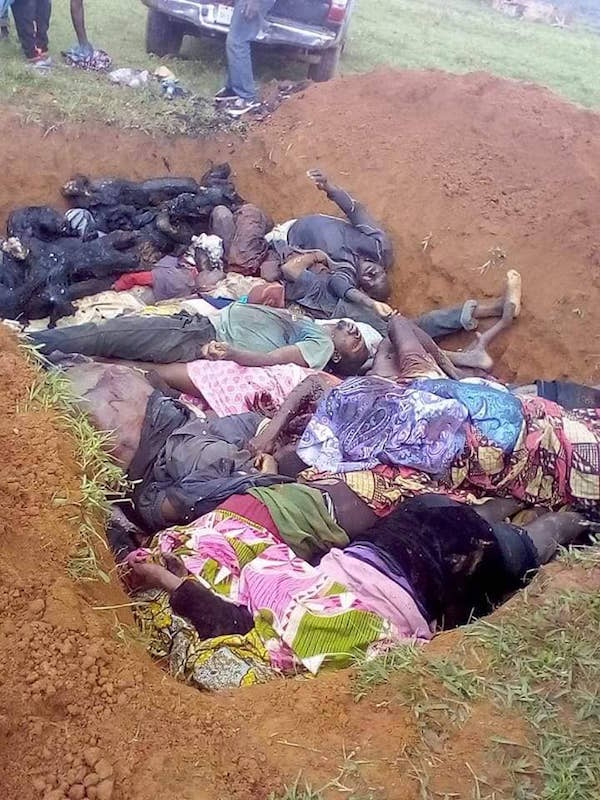 Faith McDonnell, a Christian persecution expert at the Institute on Religion and Democracy (IRD), told Breitbart News via email, “Before there was Boko Haram, there was the Fulani. Massive slaughters of Christians were taking place … [for decades] by Fulani (and other Islamists in Nigeria) before Boko Haram evolved and appeared on the scene.”

Clashes between Muslim Fulani herders and Christian-majority farmers from the Berom ethnic group in Nigeria, Africa’s most populous country, have intensified this year.

McDonnell directed Breitbart News to a video posted on Facebook purportedly showing Fulani terrorists donning choir robes of Christians from churches they have attacked in April.

Citing the recent Fulani attack that reportedly killed up to 216 people believed to be Christians, the Christian Association of Nigeria (CAN) accused the Muslim group of committing genocide.

Nigerian Senator Jonah David Jang, who represents the predominantly Christian state of Plateau, made similar claims, describing “the killings as heinous crime against his people, genocide, and an attempt to forcefully take over and occupy the ancestral land of the Berom nation,” the African country’s This Day newspaper reported this week.

Echoing some news outlets, the analysts and experts told Breitbart News the Fulani have overtaken Boko Haram as the deadliest terrorist group in Nigeria.

Breitbart News determined that, during the Muslim holy month of Ramadan this year (May 17 thru June 15), Fulani terrorists killed at least 43 people, exceeding the number of fatalities at the hands of Boko Haram.

Echoing Laugesen and McDonnell’s classification of the Fulani group members as jihadis, Mark Lipdo, the head of the Stefanos Foundation in Nigeria, a pro-Christian group, added in a statement:

In my 18 years of involvement with this killings, I found the world struggling to give various reasons for it but whether it is called ‘religious conflict or settlers/ indigenous struggles, Boko Haram or farmer/ herders clashes’ the targets are the same. The victims are clearly ethnic, non-Muslim Nigerians.

The Miyetti Allah Cattle Breeders Association of Nigeria (MACBAN), the top pro-Fulani group in Nigeria, justified the recent heinous atrocities against mainly Christian farmers in Plateau, calling the attacks “retaliatory” and equating the life of a human being to that of a cow, the pro-Christain World Watch Monitor (WWM) noted shortly following the massacre.

“As much as I don’t support the killing of human being[s], the truth must be told that those who carried out the attacks must be on [a] revenge mission,” Danladi Ciroma, the chairman of the pro-Fulani group, declared in a statement issued on June 25, referring to the more than 200 deaths of civilians in predominantly Christian regions.

“Fulani herdsmen have lost about 300 cows in the last few weeks. … In addition to that, 174 cattle were rustled,” he added.

After the statement drew outrage, Ciroma denied making it.

The Christian Association of Nigeria denounced the Fulani rhetoric painting the fatalities as “revenge killings” over the theft of cattle, WWM noted.

“We condemn these unholy acts of systematic genocide and see it as a deliberate attempt to destroy the cultural heritage of Plateau people, in particular, the most affected areas,” the CAN group declared in a statement issued following the Plateau massacre. “The killings are becoming no longer herder and farmer clashes … [but a] deliberate attempt to conquer and occupy the land of the people’s ancestral heritage.”

McDonnell also blasted the Fulani for accusing the Christians of instigating the attack by stealing cattle.

“That is an appalling bit of moral equivalence … There have been cases where some non-Muslims (whether they are actually Christians or not, do not know, but from Christian areas) have stolen the Fulani cows because the cows are running rampant over the farmland, but there cannot be moral equivalence made or justified between stealing cows and mass slaughter of Christians,” she told Breitbart News.

Nigerian President Muhammadu Buhari, who reportedly shares his ethnicity with the Fulani, has been accused of downplaying and even condoning the attacks by the Muslim group.

Some Christian leaders and experts urge followers of Christ to rise and defend themselves against the Fulani.

“For years now, though, the Christians have been saying that they ‘have no cheeks left to turn…’ If they decide to fight back – for which I think they are totally justified – Nigeria will become a war zone,” McDonnell told Breitbart News.