Islamic terrorists carried out at least 177 terror attacks during the Muslim holy month of Ramadan this year, killing 841 people and wounding 1,014 others across nearly 25 countries, a Breitbart News tally shows.

This year, Breitbart News’ count covers Islamic terrorist attacks from May 17 through June 15 — the month of Ramadan in most Muslim-majority countries covered by the data.

Breitbart News documented a total of 1,855 casualties during that period, a drop of about 45 percent from the 3,343 (1,639 killed, 1,704 injured) recorded during Ramadan last year when the Islamic State (ISIS/ISIL) was much stronger.

ISIS has suffered major losses in Iraq and Syria largely at the hands of the U.S.-led coalition and its Kurdish allies, losing its so-called caliphate under American President Donald Trump’s watch. The terrorist group has been pushed out of Iraq and squeezed the into ever-shrinking small pockets of territory in Syria. 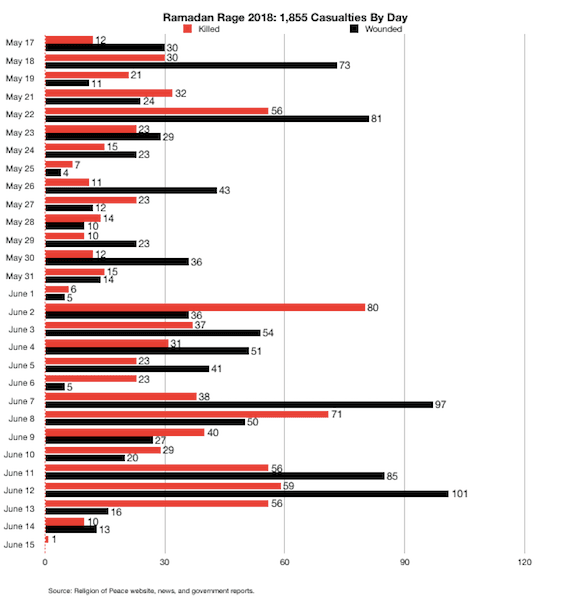 The Taliban replaced ISIS as the world’s most prolific Islamic terrorist group during Ramadan 2018, killing at least 324 Afghan civilians and security forces and wounding 404 others people despite participating in an unprecedented ceasefire at the end of the holy month.

Afghan Taliban jihadists were responsible for about 40 percent of all casualties this year, trailed by ISIS, which was behind about 30 percent.

ISIS, including its Nigeria-based Boko Haram wing, killed 256 people and wounded 281 others. Boko Haram alone killed 35 and wounded 65 others in Nigeria, one of the top five bloodiest countries during Ramadan. Fatalities in Nigeria were primarily fueled by Muslim extremist herdsmen this year, known to target the Christian minority in the country.

The herdsmen, described as terrorists by Christian persecution tracking organization Open Doors, killed 43 people and injured 45 others during the holiest month for Muslims, Ramadan.

Breitbart News was unable to determine the terrorist group behind 81 deaths and 153 injuries this year. 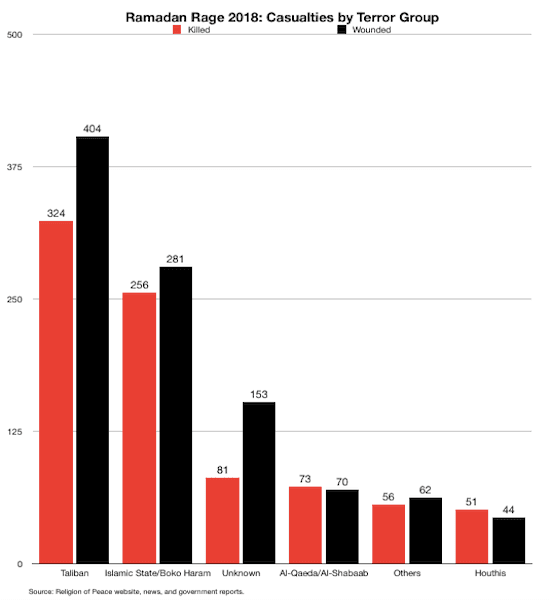 Taliban and ISIS terrorists rendered Afghanistan the deadliest Muslim country during Ramadan, home to 345 deaths and 503 injuries. Although ISIS has lost its so-called caliphate in Iraq and Syria, the terrorist group was still responsible for three out of every ten casualties during Ramadan.

Syria (163 fatalities) came in second place and Iraq (59) in fourth as the deadliest nations during the holy month.

The top five bloodiest countries during Ramadan 2018, including both fatalities and injuries, were Afghanistan (858 casualties), Syria (247), Iraq (151), Nigeria (132), and Yemen (94). Besides Nigeria, all the other four countries were home to an ongoing war, primarily between Muslims, but also involving U.S. troops. 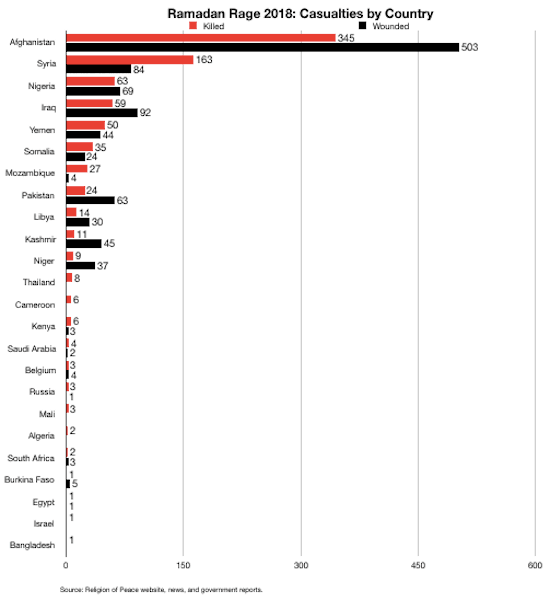 In 2018, the largest drop in Ramadan fatalities took place in Iraq where deaths dropped by more than 90 percent, from 705 last year to 59 last year. 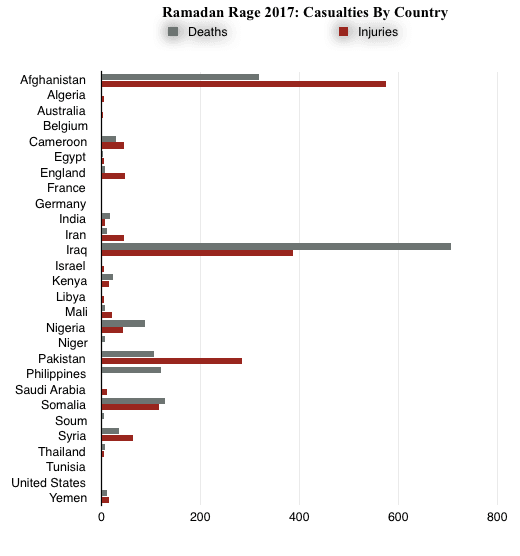 Islamic terrorists killed one American servicemember during the holy month, on June 8 in Somalia.

On average, there were about six attacks that resulted in an estimated 28 fatalities and 34 injuries each day during the holiest month for Muslims.

The vast majority of victims of jihadist attacks this Ramadan are Muslims. As in previous years, women and children are found among the casualties. There was only one attack in the West this year. On May 29, an ISIS-linked jihadi killed three and wounded four others in Belgium.

Jihadis believe it is especially heroic and rewarded by God in paradise to die a martyr during the holy month.

Nevertheless, most Muslims follow the Ramadan tradition of abstaining from eating, drinking, smoking, having sex, and other physical needs each day, starting from before the break of dawn until sunset.

Islamic terrorists were unusually quiet this year when it comes to their annual Ramadan call to arms. Unlike previous years, they did not officially urge their followers and supporters to carry out attacks during the holy month. That may have contributed to the 50 percent drop in casualties this year from 2017.

Breitbart News primarily gleans its count from the Religion of Peace website in coordination with news and government reports.

News outlets and officials may update some of the data as some of the injured victims succumb to their injuries, triggering a change in the count after Breitbart News publishes this report.
All the terrorist attacks documented by Breitbart News during Ramadan 2018 include:

May 17 — Khyber Pakhtunkhwa (KP), Pakistan — Jamaat-ul-Ahrar (JuA) terrorist group claims responsibility for a suicide bombing that kills one and injures 14.

May 17 — North Sinai, Egypt — Sunni hardliners bombed an area, killing one and injuring another.

May 18 — Diyala, Iraq — Suspected ISIS terrorists are behind a bomb blast that kills one and wounds another.

May 19 — Chechnya, Russia — Islamic State claimed responsibility for an attack at church that kills two police officers and a worshipper and also wounds another police officer.

May 21 — Sidi Bel Abbes, Algeria — Terrorists kill two men inside a mosque, including the muezzin, who calls Muslims to prayer.

May 23 — Kashmir, India — Suspected terrorists launch a grenade, injuring ten civilians, including a woman and a 12-year-old boy.

May 23 — Baghdad, Iraq — Terrorist blows himself up in a crowded park in Shiite-majority Shoala, killing seven and wounding 16.

May  24 — Benghazi, Libya — Suspected jihadists carry out car bombing behind city’s largest hotel, killing seven, including a girl, and wounding 20.

May 24 — Balochistan, Pakistan — Lashkar-e-Jhangvi (LEJ) terrorists kill one, injure another with a landmine in Kalat district.

May 27 — Kashmir, India — Terrorists kill a soldier and a civilian in Pulwama amid ceasefire.

May 28 — Mogadishu, Somalia — Suspected al-Shabaab terrorists kill a member of the security forces and a civilian.

May 28 — Pattani, Thailand — Suspected Islamists kill civilian in front of his house after returning from a mosque for prayers.

May 28 — Borno, Nigeria — Suspected Boko Haram suicide bombers kill five, wound five in two separate attacks inside a house a near a mosque in Konduga.

May 29 — Bari, Somalia — ISIS attacks army base, killing one soldier and injuring three, including civilians in Qandala District.

May 30 — Idlib, Syria — Islamists kill one civilian in al-Dana.

May 31 — Aleppo, Syria — Suspected jihadists kill four, including a child, wound six at a bus station in Jarablus.

June 3 — South Waziristan, Pakistan — Clashes between Taliban terrorists and security forces kill up to 10 Pashtun activists, injure up to 30 in Wana.

June 4 — Kashmir, India — Terrorists launch grenade at Shopian in Batapora area, wounding 23, including four policemen and 12 civilians, among them a mother and daughter. (Check for deaths).

June 6 — Narathiwat, Thailand — Suspected jihadists kill villager after he was riding home after prayers at local mosque in Bacho district.

June 13 — Deir Ezzor, Syria — ISIS executes 30 members of its own group allegedly for treason in town of Hajin.