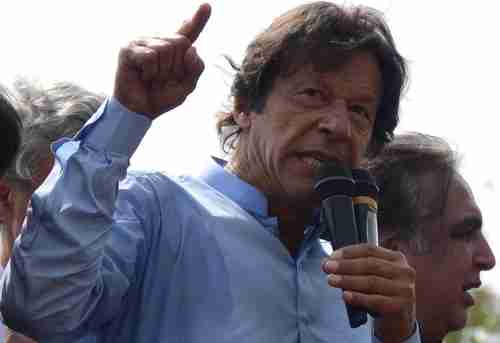 Imran Khan, who will be taking the oath of office as prime minister of Pakistan in a few days, as his political party, Tehreek-e-Insaf (PTI) (Movement for Justice), seems poised to form a governing coalition, following the July 25 national elections.

Khan, a Pashtun born in 1952, is extremely popular and charismatic. He was one of Pakistan’s greatest cricket players of all time. In the 1990s, he was voted as the “Sexiest Man of The Year” by the Australia Magazine Oz.

Khan’s views are strongly Islamist, closely associated with Pakistan’s religious far right, even to the point of supporting Pakistan’s draconian blasphemy law which allows any Pakistani citizen to kill another person with impunity, provided that he first accuses the person he’s going to kill of blasphemy. He’s anti-American, has promised to distance Pakistan from the United States, has condemned NATO airstrikes on terrorists in Pakistan, and has promised to resolve the Kashmir issue with India in Pakistan’s favor. This could be important when the army and intelligence services ask for a favor in return for helping to get him elected. The News (Pakistan) and Washington Post

Like all politicians, Khan made plenty of campaign promises that he won’t be able to fulfill. He promised to create an “Islamic welfare state,” with big public spending on health and education. In fact, his campaign speeches were totally delusional.

Imran Khan will not have much time to celebrate his victory, as Pakistan is so short of foreign reserves that it could be forced into bankruptcy within a month, and his “Islamic welfare state” is just a distant dream.

Pakistan and China like to say that they’re “all-weather friends,” but the reason for Pakistan’s enormous mountain of debt is the $52 billion China-Pakistan Economic Corridor (CPEC), part of China’s Belt and Road Initiative (BRI), which China has been using to force a number of countries into a debt trap.

The goal of the CPEC is to connect China’s western Xinjiang province to the Gwadar port in southern Pakistan by means of a collection of highways and railways. The project is to be completed by 2030.

We’ve described a number of these projects in the past, and they have common elements. China lends tens of billions of dollars to a country to build an infrastructure project. China supplies thousands of workers and their families to do the building. Chinese companies are used to provide equipment and supplies. The country must pay for all these Chinese workers and equipment with money from the loan, which means that most of the money gets sent back to China. The country must still repay the loan, which means that it’s paying China twice for the same loan. And the country is left for decades with a large Chinese community of workers and families controled by Beijing’s international coercive propaganda agency, the “United Front Work Department” (UFWD).

Pakistan has been borrowing money “like crazy” for the last five years. Imports for energy, machinery, transport equipment and metals have skyrocketed because of CPEC and because of rising oil prices. Meanwhile exports, mainly textiles, have increased only slightly. As a result, the country’s foreign currency reserves have declined to about $10.3 billion, enough to cover less than two months of imports. If Pakistan cannot pay for imports, then the entire CPEC project would be in danger.

In June, China granted an emergency loan to Pakistan for $1 billion to cover payments for imports till the end of August.

According to one analyst, Pakistan was unable to turn to Saudi Arabia for a loan because Pakistan had refused in 2016 to join the Saudi-led coalition waging a war in Yemen.

So Pakistan has been forced to turn to its all-weather friend China for one loan after another. This has alarmed even some Pakistani officials, because the country has become so dependent on China.

In the past, China has borrowed from the International Monetary Fund (IMF) for emergency funds, and wants to do so again. But there are several issues:

As a private citizen, Imran Khan has criticized the IMF in the past, and has criticized Pakistan’s government for borrowing from the IMF. Now that he’s going to be prime minister, he may have to change his tune. Dawn (Pakistan) and AFP and Dawn and South China Morning Post and Al Jazeera