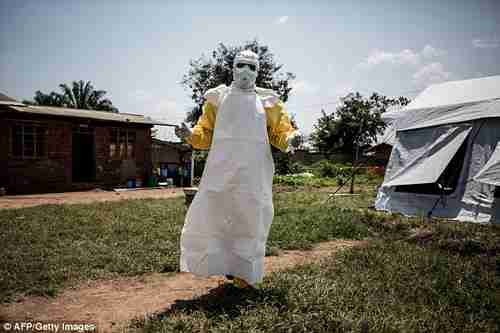 Dr. Peter Salama, from the World Health Organization (WHO), said on Friday:

For the first time really we have a confirmed case and contacts in an area of very high insecurity. It really was the problem we were anticipating and the problem at same time that we were dreading.

The reason for the statement of concern is that several simultaneous conditions in the North Kivu province of the Democratic Republic of Congo (DRC) have given rise to a situation where an explosion of new infections is likely, in a densely populated tribal war zone.

The earlier outbreak had occurred in far western DRC province of Equateur, centered on a port city on the Congo River. Applying lessons learned from the huge Ebola pandemic of 2014-16 in West Africa, the WHO moved very quickly contain and eliminate that outbreak. WHO medical personnel barely had time to relax when they received word of the new outbreak in the far eastern provinces of North Kivu and Ituri. Both the previous and current outbreaks were caused by the “Zaire strain” of the Ebola virus. However, scientific evidence shows the two outbreaks are unrelated. This means that the virus has again made a jump from the environment (through bats or animals) to people. Daily Mail and BBC and AFP

The earlier outbreak occurred in one large city, but mostly in small villages, where doctors could easily and aggressive use “contact tracing” to prevent the virus from spreading. When an Ebola patient is identified, then all that person’s contacts and contacts of contacts are tracked down and are warned to remain indoors for an incubation period of 21 days. A newly developed vaccine can be given to suspected victims to prevent illness.

So far, 63 people are believed to have died in the outbreak that began on August 1. There are about 103 confirmed and probable cases.

The biggest cause for concern is that one of the confirmed cases is that of an unidentified WHO physician who has been identifying and diagnosing Ebola patients. However, he wasn’t infected by one of his patients. He was infected by his wife when she returned from a nearby city.

The doctor had been in contact with over 100 people in the town of Oicha, about 50 km from DRC’s border with Uganda. About 97 of these people have been identified, and WHO officials have been using contact tracing and vaccinations to stop the spread. The problem is that the spreading could go out of control.

North Kivu province is rich in mineral sources, including gold. In August 2007, DRC government forces attacked civilians in order to obtain these mineral sources, creating an enormous refugee crisis, with hundreds of thousands of refugees fleeing into refugee camps in Uganda. In 2017, the number of refugees has been surging, because of tribal violence between DRC government forces and a rebel coalition known as the Allied Democratic Forces (ADF).

Currently, the city of Oicha itself is not under ADF control, but the entire region surrounding Oicha is under ADF control, where aid workers, priests, and government officials are being held hostage. North Kivu is the most densely populated province in DRC, so there are many scenarios where the virus could spread explosively — into a region controlled by the AFD, or into a refugee camp in Uganda.

The situation is even further complicated by the fact that the ADF has used violence against US peacekeepers in the region. United Nations officials were stunned in December by the worst attack on United Nations peacekeepers in recent history, when 15 people were killed and 54 wounded in Kivu state, near the border with Rwanda and Uganda. World Health Organization and International SOS