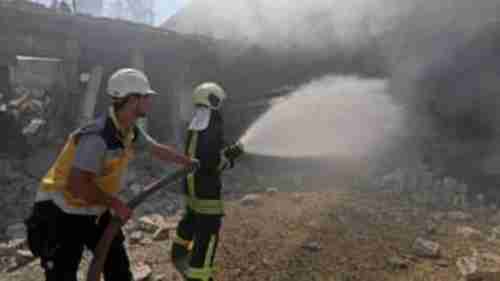 Syrian firefighters try putting out a fire in a building that was hit by Russian air strikes in Idlib, on Tuesday (AFP)

There is just one more quick battle to be fought, they have been suggesting: the battle to take control of Idlib province.

Airstrikes by Russian warplanes struck targets in Idlib on Tuesday, after a lull of several weeks, although Syrian warplane airstrikes had been ongoing. According to reports, the warplanes bombarded the countryside around Jisr al-Shughour on the western edge of Idlib, killing 13 civilians but no fighters.

Syria was losing the war in 2016, but Russia saved al-Assad by actively joining the fight. Russia’s military had been completely shut out of the Mideast after the collapse of the Soviet Union in the 1990s. But now, for the first time in decades, Russia has two military bases in the Mideast: the Tartus naval base, and the Hmeimim airbase, both of them in Syria, in return for supporting al-Assad.

In the last month, Russia has launched a large naval deployment in the Mediterranean Sea, off the coast of Syria. The naval force has more than a dozen vessels including destroyers, frigates, and submarines, some armed with Kalibr cruise missiles. It is expected that the naval force will participate in the assault on Idlib, and remain at the Tartus naval port indefinitely.

It goes without saying that this problem (terrorists in Idlib) must be straightened out. We do know that the Syrian armed forces are getting ready for tackling this problem.

Iran’s forces have also supported al-Assad in the war. Iran’s foreign minister Mohammad Javad Zarif said on Monday that all the “terrorists” in Idlib must be “cleaned out”:

All of Syrian territory must be preserved and all the sects and groups should start the round of reconstruction as one collective and the displaced should return to their families.

And the remaining terrorists in the remaining parts of Idlib must be cleaned out and the region should be placed back under the control of the Syrian people.

Al-Assad has made it clear that he considers the entire population of Idlib to be “terrorists.” Moscow Times and Tass (Moscow) and National Interest and Daily Sabah (Ankara)

Syria and Russia prepare to inflict massive bloodbath on Idlib

With Syrian army forces massing on the border with Syria, a full-scale assault is expected to start at any time.

There are 3.5 million people in Idlib. About half of them arrived there after fleeing from the violence in earlier battles in Aleppo, Ghouta, and Daraa. There are probably around several tens of thousands of “rebels,” including some belonging to al-Qaeda based Hayat Tahrir al-Sham (HTS), and others belonging to ISIS.

In Aleppo, Ghouta, and Daraa, al-Assad has been using Vladimir Putin’s “Grozny strategy,” where warplanes attack hospitals, schools, and markets with the objective of creating millions of refugees, who can then be attacked while they are out in the open. A refinement developed by al-Assad’s forces is to drop barrel bombs filled with metals, explosives, and chlorine gas. The metals would kill as many people as possible, and the chlorine gas, which is heavier than air, would fall into basements and bunkers where women and children were hiding. Once they were forced out into the open, additional barrel bombs and missiles or Sarin gas could kill the women and children en masse.

In the case of earlier targets, international pressure caused Russia and Syria to agree to allow many people to flee the violence, and take refuge in Idlib. But there is no Idlib for Idlib, which means that there is no place in Idlib for people to go to flee. So there are 3.5 million people, including about one million children, all trapped in Idlib.

Russia and Syria claim that they are only going to be targeting “terrorists” in Idlib, but al-Assad considers everyone in Idlib to be a terrorist, and so many people are expecting a massive bloodbath. Possibly over a million people will try to cross the border into Turkey, a country that already hosts about three million refugees from Syria. That may result in a new surge of refugees into Europe.

A big unknown is what role Turkey’s military will play.

Idlib is supposed to be one of the four de-escalation ceasefire zones, set up by agreement of Russia, Turkey, and Iran in meetings in Astana, Kazakhstan last year. However, the de-escalation process turned out to be a hoax, to provide cover for al-Assad’s attacks.

Idlib is one of the de-escalation zones that Turkey is responsible for. Turkey has a string of observation posts around Idlib and has been fortifying them with tanks and personnel in recent days. It is not known whether Turkey would take any military action to block Syria’s ground forces.

The United State has warned Syria that there will be a military reprisal if al-Assad uses chemical weapons in Idlib. According to reports, U.S. intelligence and military targeting experts have created a list of Syrian chemical weapons facilities that could be struck if Trump decided to order a new round of airstrikes in the country. BBC and Daily Sabah (Ankara) and CNN and Jerusalem Post