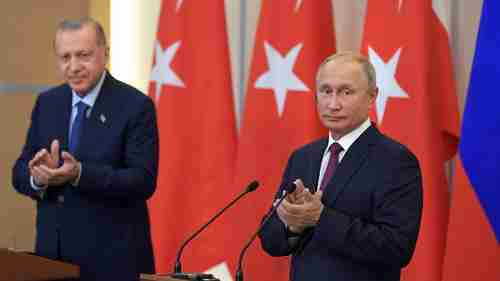 Turkey’s president Recep Tayyip Erdogan and Russia’s president Vladimir Putin held a summit meeting on Monday at Russia’s Sochi Black Sea resort. After the meeting, the two leaders held a press conference and announced that there would be no attack on Idlib province in Syria, at least for the time being.

This would have to be viewed as a diplomatic victory for Erdogan after a recent summit meeting in Tehran on September 7 with Russia and Iran where Turkey’s attempt to avert the Idlib operation was rejected by the other two parties. ( “8-Sep-18 World View — Turkey fails to prevent Russia and Iran from mass slaughter in Idlib, Syria”)

It is believed that Russia backed down from an immediate assault on Idlib because of international pressure. After the Tehran meeting two weeks ago, Erdogan said: “If the world turns a blind eye to the killing of tens of thousands of innocent people to further the regime’s interests, we will neither watch from the sidelines nor participate in such a game.”

Since then, Turkey has been supplying additional weapons to “moderate” rebels in Idlib to prepare them for the assault. Separately, the U.S. and other NATO countries have repeatedly warned Russia and Syria. President Donald Trump said that the assault would be a “grave humanitarian error,” while Nikki Haley said that it would provoke “dire consequences.”

And Russia’s decision may have been swayed by the prospect of the enormity of the humanitarian disaster if al-Assad starts perpetrating Putin’s own “Grozny Strategy,” exterminating women and children in Idlib with attacks on hospitals, markets, and schools, with barrel bombs loaded with explosives, metals, and chlorine gas, and with Sarin gas, causing massive slaughter and massive crowds of fleeing refugees.

There is one more reason why Putin might be reluctant to go ahead with the mass slaughter in Idlib. Putin has said at least 9,000 people from the republics of the former Soviet Union have gone to Syria to fight for al-Qaeda or ISIS or other extremist groups. It is possible that many of them are still in Idlib, and the Syrian-Russian assault would allow them to join refugees pouring into Turkey, and from there continue on to return home to their native countries to continue the jihad there. Russia Today and AP and Daily Sabah (Ankara)

The agreement between Erdogan and Putin is a big relief to a lot of people, especially the people in Idlib, because it buys time. But it buys little more than that because the terms are delusional.

All the anti-Assad “rebels” in this buffer zone are required to lay down their arms, leave behind heavy artillery, and depart for other enclaves. These include both “moderate” rebels and also those in al-Qaeda linked Hayat Tahrir al-Sham (HTS), formerly the al-Nusra Front.

It will be Turkey’s responsibility to separate the 60,000 or so rebels from the other three million civilians in Idlib. It would be nearly impossible anyway, but these are people who will not want to be found and are willing to die rather than surrender.

But the main objection to this temporary peace agreement is the same as all the others in Putin’s “Astana process.” You have a ceasefire agreement between Turkey, Russia, and Iran. These are supposed to be Syrian peace agreements, but there are never Syrians involved in the agreement – either al-Assad or the opposition.

The whole Astana process has been nothing more than a farcical cover for al-Assad’s genocidal actions. The Astana process identified four “de-escalation zones,” or “ceasefire zones,” but Russia never had any intention of meeting its own commitments. The ceasefire zones were set up so that there would be a ceasefire until al-Assad was ready for his extermination assaults, as we’ve seen in Aleppo, Ghouta, and Daraa.

Russia and al-Assad never had any intention that Idlib would remain a ceasefire zone, but now they have been forced by international pressure to wait a while before going in for the kill. And when they do, whether they will have to face Turkey’s military is an unknown.

BBC and Al Jazeera and Asia Times and Hurriyet (Ankara)