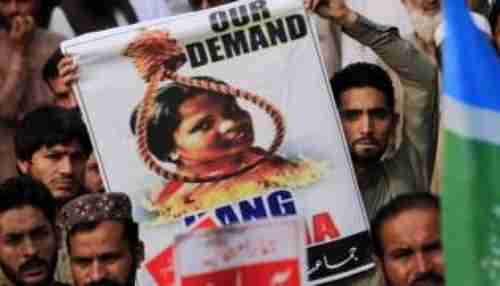 Three days after Pakistan’s Supreme Court acquitted Asia Bibi on blasphemy charges, the government has signed a 5-point agreement with the Barelvi sect/Tehreek-i-Labbaik Pakistan (TLP) terrorists completely capitulating to the demands of the terrorists. The TLP had mobilized massive protests across the country, blocking roads in and out of big cities, and had threatened to kill the three Supreme Court judges who had written the opinion freeing Asia. Even Pakistani media and politicians were alarmed at the extent of the government capitulation and wondered whether the government would survive.

1. A review petition has been filed in the Aasia Bibi case, which is the right of the petitioners. The government will raise no objections over the review petition.

2. Due process will be followed immediately to include the name of Aasia Bibi in the Exit Control List (ECL).

3. Immediate legal action will be taken over the martyrdom of any individuals during the protest campaign against the acquittal of Aasia Bibi.

4. All those arrested on October 30 or afterwards in the protest campaign against Aasia Bibi’s acquittal will be released immediately.

5. The TLP apologizes to anybody whose sentiments have been unnecessarily hurt during the incident.

The reference to the “Exit Control List (ECL)” means that Asia’s name will be placed on the airline list that prevents someone from leaving the country. The UK had sent a plane to take Asia to Europe, but it had to leave without her. Asia is said to be in protective custody somewhere.

A number of people had been arrested during the three days of massive demonstration for destroying property and causing violence and the agreement says that they will be freed.

The only concession made by the terrorists is that they apologize for hurting people’s feelings.

A lot of people are now wondering whether Pakistan is ruled by Islamist terrorists. The new president Imran Khan initially said the following:

I say to these people: do not confront this state … do not damage this country for your vote bank. If you do this, I promise that the government will do its duty … I ask you: do not force the government to have to take action.

Khan did take action the next day – total capitulation.

A lot of people congratulated the Supreme Court for its bravery in acquitting Asia, but are now wondering why Asia was not acquitted by a lower court long before this. One analyst answers as follows:

People ask a question as to why Sessions Court and Lahore High Court convicted her for blasphemy and endorsed death penalty. There are mainly two reasons. First, it is obvious that death threats from the extremists who use Islam for their political gains that might have forced the judges; you have see the chaos by now, for which most judges were afraid of. Secondly, the judges of lower courts were not that courageous to take the risks of their lives for justice.

Questions about Mohammed’s covenant with Christians and Christianity

It is not surprising that the TLPwase absolutely furious about the Supreme Court ruling, which I described three days ago. It was a scathing opinion not only that Asia was not a blasphemer, but that her accusers and, by implication, the Barelvi/TTP terrorists were themselves blasphemers, because they had blasphemed Asia’s Christian belief, which Mohammed had ordered all Muslims to protect in a covenant.

Several people asked for more information about this covenant, and whether it actually exists. The text of the covenant appears in the court opinion that I quoted in my previous article, and is repeated here:

This is a message from Muhammad ibn Abdullah, as a covenant to those who adopt Christianity, near and far, we are with them. Verily I, the servants, the helpers, and my followers defend them, because Christians are my citizens; and by God! I hold out against anything that displeases them. No compulsion is to be on them. Neither are their judges to be removed from their jobs nor their monks from their monasteries. No one is to destroy a house of their religion, to damage it, or to carry anything from it to the Muslims’ houses. Should anyone take any of these, he would spoil God’s covenant and disobey His Prophet. Verily, they are my allies and have my secure charter against all that they hate. No one is to force them to travel or to oblige them to fight. The Muslims are to fight for them. If a female Christian is married to a Muslim, it is not to take place without her approval. She is not to be prevented from visiting her church to pray. Their churches are to be respected. They are neither to be prevented from repairing them nor the sacredness of their covenants. No one of the nation (Muslims) is to disobey the covenant till the Last Day (end of the world).

Possibly the best way to understand this covenant is to consider the phrase, “Verily, they are my allies.” The word “allies” is used in a literal sense. The document was signed in 628 AD, when Mohammed was in the middle of a generational crisis war between his own Hashim clan versus the Umayyad clan in Mecca. Mohammed had nothing against the Christians and had no reason to fight them, so he promised to protect them.

Over the centuries, Muslim nations have continued to protect Christians living among them, choosing to tax them rather than kill them. So Mohammed’s covenant has been followed for 1400 years.

A lot of this was discussed in my book, Iran’s Struggle for Supremacy: Tehran’s Obsession to Redraw the Map of the Middle East.

For the most part, it is Muslims who kill Muslims (Syria, Iraq, Yemen, etc.), and it is Christians who kill Christians – Nazis vs Russians, French and British, Hutus vs Tutsis, Russians vs Ukrainians and Georgians, etc. Most of the time, that is the way the world works. Islamic Supreme Council

John J. Xenakis is the author of the book, Iran’s Struggle for Supremacy: Tehran’s Obsession to Redraw the Map of the Middle East, available on Amazon for $5 for the digital version or $7 for the paperback version.