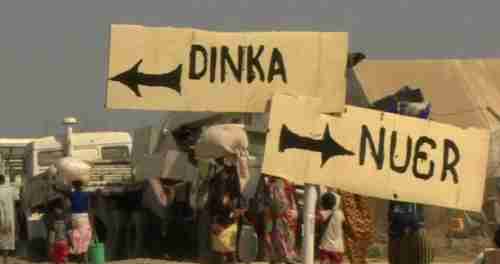 Signs separating the Nuer and Dinka tribes in a U.N. refugee camp in South Sudan (Nyamilepedia)

There is an old saying, “Peace is that brief, glorious moment in history when everybody stands around reloading.” That saying may apply to South Sudan after a peace agreement was signed in September.

The sacking led to extremely bloody and violent clashes between Dinka and Nuer militias. The conflict killed hundreds of thousands of civilians, displaced an estimated one-quarter of the population of 12 million, and ruined the economy, which depends heavily on crude oil production.

This was the second or third peace agreement signed since 2013. It calls for an immediate ceasefire. It calls for an end to recruitment of soldiers on both sides, an end to the trafficking of young girls, and a power-sharing agreement with the return of Machar to be vice president again in May.

Although low-level violence has been a constant since South Sudan became independent of Sudan in 2011, there were major clashes that began in December 2013. ( “29-Dec-2013 World View — Conflicts grow in South Sudan and Central African Republic”) There followed 21 months of atrocities until they were supposedly ended by a peace treaty signed by both sides in August 2015. By mid-2016, the fight was fully engaged again.

There are concerns that this peace agreement will not last, either.

There is news emerging that in the last ten days of November, 150 girls and women were raped near the town of Bentiu. The situation is still being investigated.

And a new report by the United Nations Commission on Human Rights in South Sudan says that both sides are continuing to recruit fighters, many of them just boys.

There has been a letup in the violence since the peace agreement was signed in September, but it remains to be seen whether it will last, or whether it was just a brief, glorious moment when both the Dinkas and the Nuers spent the time reloading. Al Jazeera (12-Sep) and Reuters (12-Sep) and Council on Foreign Relations (26-Sep) and Sudan Tribune and AFP

The Dinka and the Nuer tribes have had conflicts over land for centuries. In numerous other countries, I have described how ethnic wars grow over farmers versus herders. But in South Sudan, both the Dinkas and Nuers are herder communities. The conflict over land is the same, however. Clashes begin during dry periods when both sides compete for the same land.

Sudan was ruled by the Ottoman empire and later by an arrangement of Egyptian and British control. When Sudan became independent of Britain in 1956, the north was largely Muslim and Arabic speaking, while the southern population mostly followed tribal religions. The Khartoum government in the north launched a program to “Arabize and Islamize the South.” This triggered a reaction from Christian evangelists, mostly from the US, to come to Sudan and convert the South to Christianity.

There was immediately a north-south war of independence, but there was also a generational crisis civil war between the Nuer and Dinka tribes. This climaxed on November 15, 1991, when the “Bor Massacre” began. Over the next three months, 2,000 civilians were killed, thousands more wounded, at least 100,000 people fled the area. Famine followed the massacre, as looters burnt villages and raided cattle, resulting in the deaths of 25,000 more from starvation.

The nightmare scenario is that the new clashes will spiral into a repeat of the 1991 Bor Massacre. But from the point of view of Generational Dynamics, South Sudan is in a generational Awakening era, so a historic massacre of this type will not occur, despite the enormous ethnic hatred between the Nuers and the Dinkas. Sudan Tribune (24-Nov-2018) and National Geographic (30-Sep-2014) and Vox (9-Jan-2017) and Nyamile (31-Mar-2016)