Japan invites hundreds of thousands of foreigners to work in Japan 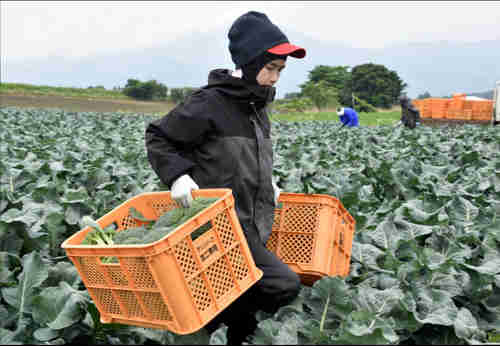 In the predawn hours on Saturday, Japan enacted controversial new legislation that will permit 345,000 low-skilled foreign workers to relieve labor shortages, especially in such areas as farming, nursing care, and construction.

From April 1, a new residency permit category will allow foreigners who have completed some skills training and passed a Japanese-language test to work in Japan for up to five years in 14 industries.

The passage of the new law is almost an act of desperation, as Japan has a low birth rate and an aging population and needs workers who can build buildings, and support the elderly and the factories.

However, there is a great deal of opposition to the measure for several reasons.

Foreign workers in Japan have been forced to work at almost slave wages in jobs where they can be abused and exploited.

Labor leaders object to a program that brings in low-wage workers that will take the jobs of Japanese workers.

But most of the objections refer to the Japanese culture. Throughout its history, Japan has been an island shut off from the rest of the world, with its unique shared customs and shared culture, and foreign workers would not fit into that. Furthermore, Japan has a history that a small number of Japanese treat any foreigners as subhuman.

For that reason, the new legislation is including a package of measures to provide skills training, language training, and to ensure decent working conditions. Japan Today and Nikkei and Washington Post and Japan Times

Analyzing the generational history of an insular Japan

The insular, isolated culture of Japan has presented unique problems in trying to understand its history from the point of view of Generational Dynamics theory.

For the past few centuries, we can divide Japanese history into four distinct periods:

From the point of view of Generational Dynamics theory, the problem occurs in the analyzing the 250-year Tokugawa era. Going 250 years without a major war is not possible. Populations grow exponentially and use up land and water resources, and after a few decades there is not enough food for everyone, so there has to be a war to restore the balance. So if there were generational crisis wars during that 250-year period, then how come we are not seeing them?

Xenophobia and nationalism are often defined in terms of things like race, skin color, appearance, language, geography, and religion, things that are set at birth and cannot be easily changed. What makes Japan unique is that because of its insularity and homogeneity, there is little difference among groups of Japanese in terms of race, skin color, appearance, language, geography, and religion. The only thing that separates one group of Japanese from another would be political beliefs, things that can be easily fudged or even changed.

When historians write about wars during a period, how do they describe the wars? Usually, it is “North vs South” or “dark-skinned vs light-skinned” or “Protestants vs Catholics” or “English-speaking vs French-speaking,” or something like that. How would a historian describe a war in Japan? In the “Warring Period,” it was one warlord versus another.

But in the Tokugawa period, there is apparently no obvious way. There must have been wars because the population growth would have exceeded the demand for food, land, water, and other resources, but how these wars manifested themselves is little understood in the West. This is an area that requires additional research. Japan Times and Columbia University and History.com