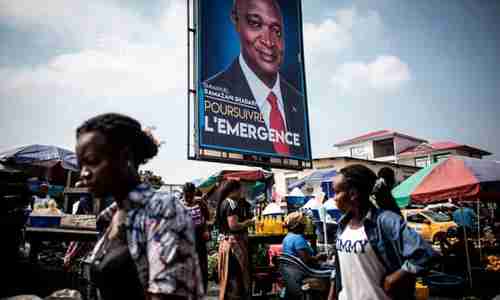 Women walk past a campaign poster of Joseph Kabila’s chosen successor as president of DRC, Emmanuel Ramazani Shadary, in Kinshasa on Dec 18 (AFP)

The Democratic Republic of Congo (DRC) is scheduled to hold a presidential election on Sunday and this time, Joseph Kabila is not a candidate. That is because he has already been president for two 5-year terms and the constitution says he cannot run again.

Joseph Kabila became president in 2001 after his father, Laurent Kabila, was assassinated. He ran for reelection in 2006 and 2011. When his mandate ran out in December 2016, he refused to step down. Instead, he pulled a breathtaking stunt by doing everything possible to prevent new elections from taking place and then claimed that he could not step down because there had not been any elections to select a president to replace him.

The country was close to civil war, but the Catholic Church intervened and brokered an agreement: Elections would be held in December of 2017 to choose Kabila’s successor and this time Kabila would really step down. However, the agreement was a farce: It was signed by members of Kabila’s government but not by Kabila himself. Kabila pulled the same stunt in December 2017 by doing nothing to prepare for an election, then saying he could not step down because there had not been any elections.

So this time there is apparently going to be an election, but Kabila has pulled a different stunt. He has arranged for his own puppet, Emmanuel Ramazani Shadary, a former interior minister, to run for president. Shadary was responsible for a violent, deadly crackdown on anti-Kabila protests in 2017 and so he is under sanctions by the European Union.

Corruption in DRC is rampant. Kabila and his family own, either partially or wholly, more than 80 companies and businesses in the country and abroad. He and his children own more than 71,000 hectares (175,444 acres) of farmland. His family owns diamond mines, a part of the country’s largest mobile phone network, companies that mine mineral deposits, gold, and limestone, a luxury hotel, stakes in an airline, a share of the country’s banks, and a fast-food franchise. With tentacles reaching into so many businesses, it is not surprising that Kabila is willing to use any method – massacres, atrocities, jailings, torture – to stay in power.

Few people doubt Kabila’s plan – that Shadary becomes president for a term, so that Kabila can run again after Shadary’s term ends, acting as Kabila’s puppet in the same way that Medvedev served as Putin’s puppet.

Shadary may lose the election. He has no charisma, and he has no experience in politics. He’s a nobody. However, he’s expected to win anyway because there are two major candidates running against him, and over a dozen minor candidates, and they’re expected to split the opposition vote, giving Shadary (and Kabila) the victory.

Kabila has banned election rallies by the opposition. Al Jazeera and Council on Foreign Relations and Guardian (London)

According to the World Health Organization (WHO), “The outbreak is intensifying in Butembo and Katwa, and new clusters are emerging elsewhere. Over the last 21 days (25 November to 16 December 2018), 120 confirmed and probable cases were reported from 14 health zones, the majority of which were reported from the major urban centres and towns in Katwa (27), Beni (27), Butembo (17), Komanda (16) and Mabalako (12).”

The situation in North Kivu province is the worst possible scenario. There is a major ethnic war in progress and Ebola is now spreading in the densely populated city of Beni, which became the epicenter of the pandemic. However, the number of cases in Beni seems to have peaked, while the disease has spread to the south and Butembo may be the new epicenter.

The entire region is a war zone and over one million people have been driven from their homes by armed rebel groups, the Allied Democratic Forces (ADF), fighting government troops allied with Joseph Kabila. The fighting is preventing doctors and experts from reaching infected people, in order to educate the population and do contact tracing. Without contact tracing, there is no way to stop or slow the spread of the disease.

The Ebola outbreak has been growing, but so far it has been confined to DRC. North Kivu is on the border with Uganda and many people cross the border between Uganda and DRC each day. It is feared that Ebola will cross the border with the people, but that has not happened yet. According to one resident of the village of Mpondwe in Uganda, just across a bridge from the village of Lhubiriha: “I’m scared. Ebola hasn’t reached our village but I hear it’s coming.” AFP and Center for Infectious Disease Research (CIDRAP) and AP and CNN