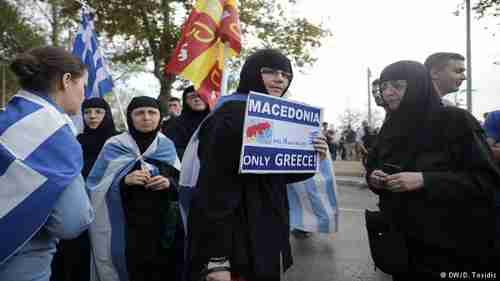 After a highly tense and emotional debate lasting several days, Macedonia’s parliament approved four constitutional amendments that change the country’s name to “Republic of North Macedonia.” This ratifies the Prespa Agreement (Prespes Agreement) made last year with Greece, and after Greece’s parliament ratifies the same agreement, it will be possible for North Macedonia to join the European Union and NATO.

This has been a highly emotional issue in both Macedonian and Greece since 1991, when the Republic of Macedonia declared independence from Yugoslavia. The Kingdom of Macedon is an ancient name, dating back centuries B.C., and is the birthplace, in 356 BC, of Alexander the Great.

But Greece objected to that country’s use of the name Macedonia, claiming that having that name would give the country a claim to Greece’s own province of Macedonia. These concerns were increased because of a clause in the country’s constitution referring to “the rights of all persons belonging to the Macedonian people in neighboring countries, as well as Macedonian expats.” Although this clause refers to cultural development, Greece raised concerns that the clause could be used in the future to attempt to annex Greece’s Macedonia province.

For 25 years, Greece has vetoed attempts by Macedonia to join either NATO or the E.U. because many Greeks consider “Macedonia” to be a pure Greek name and they oppose another other country using it as part of their own name. They are especially infuriated by Macedonia’s claims that Alexander the Great was Macedonian. They claim that he was Greek because at that time the Kingdom of Macedon was part of Greece.

The statue of Alexander the Great in Freedom Square in the heart of Skopje, Macedonia’s capital city, infuriates the Greeks

Macedonia was admitted to the United Nations in 1993 under the name the Former Yugoslav Republic of Macedonia (FYROM). It has also been admitted to the World Bank and the International Monetary Fund (IMF) under the name FYROM. The European Union and NATO also recognize only the name FYROM. However many countries, including Russia and the United States, also recognize the name Republic of Macedonia, or just Macedonia.

During the last year, there has been tremendous international pressure to resolve the dispute. A variety of alternate names for the country were proposed, including:

Last week, Macedonia’s parliament voted in the four constitutional amendments with 81 votes and none against and no abstentions, as the opposition VMRO-DPMNE party boycotted the session.

During the vote, several hundred people protested in front of the parliament, chanting “Traitors.” VMRO-DPMNE leader Hristijan Mickoski joined the protests and said January 11 was “black Friday” for Macedonia.

The four amendments change the name of the country to “Republic of North Macedonia,” guarantee sovereignty and the territorial integrity of the country, and protection of Macedonian cultural and historical identity, as well as rights of the diaspora. They also eliminate the ambiguity about a claim to Greece’s province of Macedonia.

The constitutional amendments will take effect as soon as Greece’s parliament ratifies the Prespa Agreement. After that, it is expected that the Republic of North Macedonia should be able to join the European Union and NATO. Balkan Insight and BNE IntelliNews and Greek Reporter and Nezavisen (Macedonia) and Deutsche Welle 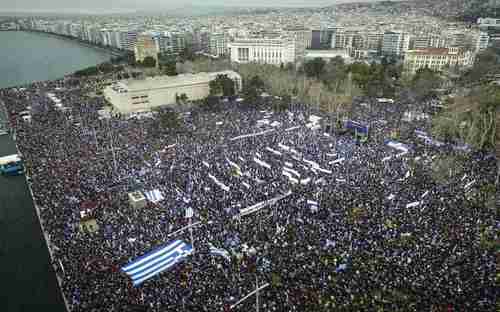 Hundreds of thousands of Greeks in Thessaloniki (Salonica), the capital city of Greece’s administrative region of Macedonia, last year protested any name change to the Republic of Macedonia that includes the word ‘Macedonia’ (Kathimerini)

Greece’s Prime Minister Alexis Tsipras called for a vote of confidence on Wednesday after the Independent Greeks (ANEL) party announced its departure from the ruling coalition. The split occurred over the issue of ratifying the Prespa Agreement (Prespes Agreement), under which the Republic of North Macedonia will be permitted to apply for membership in the European Union and NATO, having agreed to change its name from Republic of Macedonia. ANEL leader Panos Kammenos said, “The issue of Macedonia, an issue for which thousands died, does not allow me not to sacrifice the minister’s chair.”

If Tsipras loses the vote of confidence, then he will have to call for new elections. New elections are scheduled for September anyway. Guardian (London) and Greek Reporter and Kathimerini (Athens)