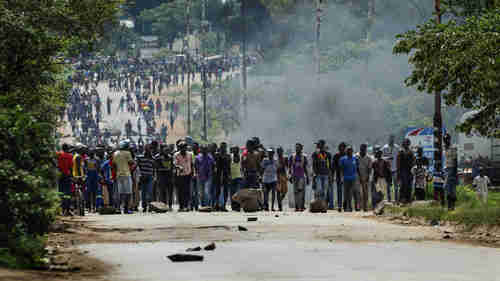 Zimbabwe’s government has reacted to public protests of high gasoline and fuel prices with a massive police and military crackdown. At least eight people have been killed in four days of sometimes violent protests and dozens are being treated for gunshot wounds. Hundreds have been abducted in their homes and thrown into crowded jails, where they are sometimes beaten and tortured.

It is possible that there are far more casualties as the government shut down the internet most of the week to prevent news of the violence from being reported.

Some reports indicate that the government security forces, which are mostly members of Mugabe’s Shona tribe, were particularly targeting the city of Bulawayo. Bulawayo is a government opposition stronghold with a population from Mugabe’s hated Ndebele tribe. Mugabe’s violence always targeted the Ndebele tribe, including the 1980s Operation Gukurahundi, which was a massive act of genocide and ethnic cleansing.

According to one lawyer representing 30 people, including children, in the central prison in the capital city Harare, “Most said they had been abducted from homes by masked men with AK47s who dragged them out and beat them up. They are being held without charges or representation, with no food or water … The brutality of what is going on is shocking.”

The U.S. Embassy in Zimbabwe says it is “alarmed” by credible reports that security forces are targeting and beating activists and labor leaders.

The protests were led by Evan Mawarire, a Christian pastor and prominent social activist who called for a nationwide strike on Monday after the price increases were announced. He was arrested in his home early on Wednesday, charged with inciting violence. Mawarire said, “I cannot tell you how heartbreaking it is. We thought we had a new country and a new way of doing things. None of what I am being accused of is what I have done at all.”

Mugabe’s ouster was quite a remarkable show. One week, 93-year-old Robert Mugabe was universally loved by everyone in the country and would rule Zimbabwe forever, even from his grave when he died, according to his 53-year-old wife Grace Ntombizodwa Mugabe. ( “19-Nov-17 World View — Ecstatic throngs in Harare Zimbabwe demand that Robert Mugabe step down”)

One week later, Mugabe was universally hated, with tens of thousands of people cheering ecstatically and marching, carrying banners that read “Mugabe must go!” and “Leadership is not sexually transmitted,” the latter an allusion to the attempt by Grace Mugabe to succeed her husband as president. Another sign read, “Mugabe must rest now!” alluding to the fact that Mugabe falls asleep during meetings.

There was never any chance that replacing Mugabe with Mnangagwa would suddenly change Zimbabwe. Mugabe was a vicious, violent racist who spent decades destroying Zimbabwe’s economy and it will take a similar amount of time to repair the damage.

Mnangagwa has been trying to convince foreigners to invest in Zimbabwe again. After the continuing violence, possibly with the worst yet to come, investors may not be interested. Mail & Guardian (South Africa) and Guardian (London) and AFP and Zimbabwe Mail

It is possible that Mnangagwa is changing Zimbabwe, making it worse

Zimbabwe was never going to be better under Emmerson Mnangagwa than it was under Robert Mugabe because both of them cooperated in four decades of horrific crimes that have destroyed Zimbabwe economically and socially, turning it from a country that used to export food into a country that cannot feed itself.

They are both in the Shona tribe and they both are responsible for Operation Gukurahundi, the genocidal war crime that brought in North Korean soldiers to help exterminate tens of thousands of civilians of the Ndebele tribe in the early 1980s.

They have both cooperated in turning Zimbabwe into a police state where anyone who speaks against the government was likely to be arrested, tortured, and killed. This is particularly true of the members of the Ndebele tribe that managed to survive Operation Gukurahundi. This was supposed to have changed with Mnangagwa, but the events of the last week show that it has not.

They both worked together on Mugabe’s “indigenization” program, which threw out farm and business owners who knew how to run a farm or a business and replaced them with thugs and cronies from Mugabe’s and Mnangagwa’s Shona tribe who did not know how to run a farm or business. Over three decades, Mugabe and Mnangagwa turned Rhodesia, which was a wealthy country and the breadbasket of southern Africa, into today’s Zimbabwe, which is an economic basket case. At one point, the inflation rate was in the millions of percent.

However, there are signs from this week’s violence that the situation under Mnangagwa is even worse than it was under Mugabe. Mnangagwa was on a trip to Eurasia when the protests started and is still out of the country. In his absence, the security forces have conducted large scale violence not seen in over ten years. One analyst says that what is different this time is “the open militarization of the state.”

Alex Magaisa, a Zimbabwean lawyer and professor at the University of Kent, says, “People wanted to see Mugabe go, but they didn’t realize that they were actually creating a bigger monster. The military is now very much in control – and very powerful.”

From the point of view of Generational Dynamics, this is the kind of thing that always happens to a country following a generational crisis civil war between two ethnic groups or tribes. The tribe in power after the war, usually the winner, uses the fear of renewing the civil war as a never-ending excuse to use tactics of abuse, violence, jailings, rapes, beatings, and executions, supposedly to prevent another war. However, once the survivors of the civil war grow old and are no longer in charge, and are replaced by people in younger generations with no personal memory of the war, then a new generational crisis civil war starts, and it all repeats. Foreign Policy