Sunday marks the 70th anniversary of the end of the Soviet blockade of Berlin which sparked ‘Operation Vittles’, as the Berlin Airlift became officially known.

For one former U.S. Air Force pilot the occasion is personal.

Gail Halvorsen, a frail but determined 98-year-old, returned to Berlin’s former Tempelhof airport for the remembrance of the combined effort by the western Allies in 1948-49 that set Europe on a course of reconstruction after the depradations of World War II.

Halvorsen, from Utah, was just one hundreds of air crew who flew in supplies to West Berlin’s 2.5 million population amid emerging tensions in Germany’s ruined and divided capital.

As well as foodstuffs, they also delivered hope.

Operating almost non-stop and through the harsh German winter, the Airlift carried more than two million tonnes of supplies on more than 277,000 flights, mainly into Tempelhof.

U.S. Air Force C-47 Skytrains and C-54 Skymasters took milk, flour and medicine to West Berlin. At the height of the Berlin Airlift, aircraft were landing every three minutes, supplying up to 13,000 tons of food, coal and medicine a day, according to the U.S. Air Force Historical Support Division. 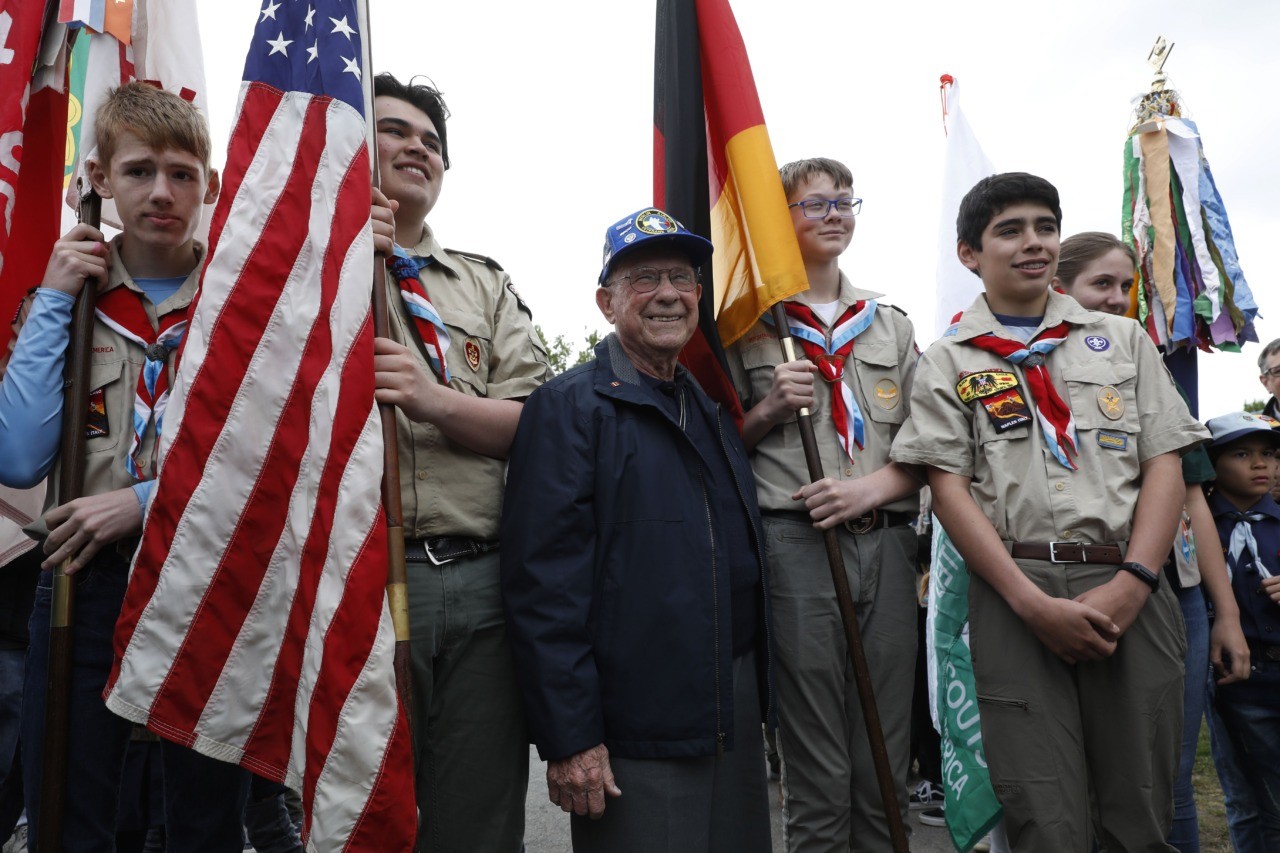 Veteran Ralph G Dionne, former flight engineer of the Airlift 54Fleet, poses with members of the Boy Scouts of America during during a ceremony at the Tempelhofer Feld, a former airfield in Berlin, on May 11, 2019. – The Berlin Braves sports club dedicated their baseball and softball fields to former Berlin airlift pilot Gail Halvorsen on the sidelines of the 70th anniversary of the end of the Berlin airlift. ( MICHELE TANTUSSI/AFP/Getty)

At least 78 US, British and German pilots and ground crew lost their lives in accidents in the air and on the ground, as the Allies strove to prevent Berlin’s population from starving.

It was the first major salvo of what became known universally as the Cold War.

The then-1st Lt. Halvorsen, who retired from the Air Force as a colonel in 1974, was one of the American pilots flying around-the-clock missions from Rhein-Main Air Base in West Germany to Tempelhof Air Field in Berlin. He participated in 126 missions delivering supplies and food from July 1948 to February 1949.

He was the first American pilot to famously drop bundles of chocolate with handkerchief parachutes to children waiting below.

To signal that he was about to release the candy-laden parachutes, Halvorsen would dip his C-54 Skymaster’s wings, earning him the nickname “Uncle Wiggly Wings”.

When he wasn’t aloft, Halvorsen was filming aircraft landings with his Revere movie camera when he encountered about 30 German children between the ages of 8 and 14, he said in his autobiography, The Berlin Candy Bomber.

Their friendships would last through the decades since.

“Candy bomber” Halvorsen insists that the real heroes of the Berlin Airlift — the mammoth logistical operation to air-drop supplies into West Berlin after the Soviet Union blockaded it — were those people inside the city.

“The heroes of the Berlin Airlift were not the pilots, the heroes were the Germans — the parents and children on the ground,” he told AFP. 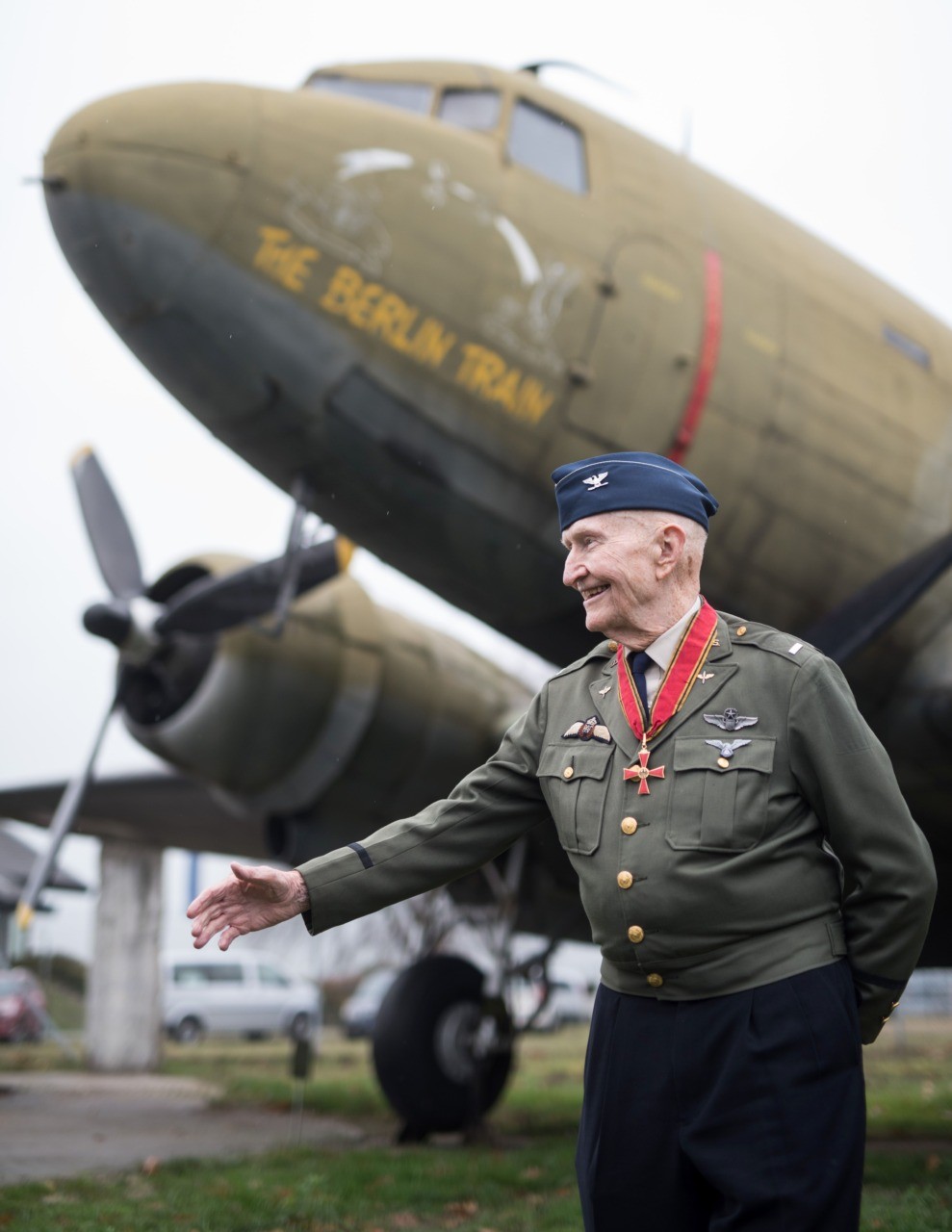 Gail Halvorsen poses in front of a military transport aircraft at the airport in Frankfurt am Main, central Germany( BORIS ROESSLER/AFP/Getty Images)

“They were the stalwarts of the confrontation with the Soviet Union, not the guys bringing in the food, it was the people (of West Berlin) standing up for themselves.”

Halvorsen is guest of honour at Sunday’s festival to mark 70 years since those dark days. He still remembers why he flew then and why the world today would be loathe to forget the lessons of the necessary fight against evil ideologies that seek to take our freedoms.

After handing out candy to local children, Halvorsen urged “future leaders” in both Germany “and America” to protect their way of life. He believes freedom is not a luxury, it must be fought for through the generations if necesaary.

“I would exhort the young people to keep an open mind to know that some leaders will lead free people in the wrong direction,” Halvorsen warned.

“They need to use their judgement about what they believe in the news, that they need to make their own decision on who rules them.

“Freedom is important and sometimes you have to fight for it.

“That’s why we came on the Berlin Airlift, to help people make their own decisions.”