Russia’s scaled-down version of the Hong Kong protest movement appeared to have quieted down after the city elections that provoked it came and went in August, but it experienced a resurgence on Sunday when 25,000 people marched in Moscow to demand freedom for demonstrators arrested during the government crackdown.

The public’s angry response to these prosecutions has thus far inspired prosecutors to drop the charges against six of the 14 defendants. Five of the remaining defendants have been given jail sentences for inciting “mass civil unrest.”

Opposition leader Alexei Navalny, an indefatigable and often flamboyant critic of President Vladimir Putin who has seen the inside of many Russian jail cells, told rally attendees on Sunday their angry response was the reason so many of the charges have been dropped.

“Why did they release those they have released? Because they are scared of falling ratings. Because they see people won’t support them for this,” Navalny said to the crowd.

“Ski-mask raids are not a symbol of horror and terror. They are a symbol of cowardice,” he jeered. 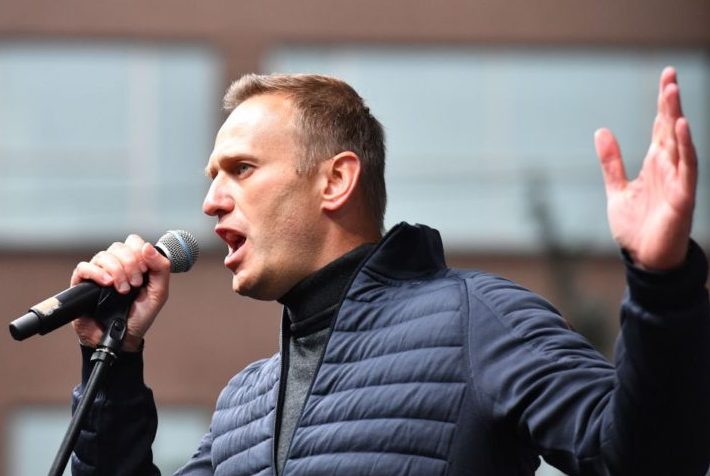 Russian opposition leader Alexei Navalny gestures as he delivers a speech during a demonstration in Moscow on September 29, 2019. (YURI KADOBNOV/AFP/Getty Images)

The Moscow Times on Sunday suggested the Russian government was premature to believe it was able to stamp out the protest movement with 2,400 arrests and a handful of jail sentences:

The response from the authorities has recalled the crackdown on the 2011-2012 Bolotnaya protests, the last wave of anti-government demonstrations in the Russian capital. But what has stood out this time around, political analysts say, is that Russian civil society has awakened in response.

Over recent weeks, groups of professionals ranging from teachers to doctors to Orthodox priests have signed open letters demanding the release of those sentenced.

Earlier this month, actors picketed outside of the presidential administration demanding that Pavel Ustinov, 23, who was sentenced to three and a half years in prison for allegedly dislocating a police officer’s shoulder, be freed. He was released on house arrest soon after.

“This has happened in Putin’s Russia before, but as a rule this was tied to social or economic demands like low salaries,” said political analyst Maria Lipman. “It is unprecedented that we are seeing these groups speaking out against injustice.”

The Moscow Times noted that several of the detainees released when the charges against them were dropped immediately joined the huge protest march as soon as they emerged from jail. Some of them were featured speakers alongside Navalny and his allies on stage.

Attendees of the weekend rally said they understand the importance of showing that they were not cowed by the crackdown and did not lose their energy when the Moscow elections were held last month with independent candidates kept off the ballot, the outrage that got their movement started.

Navalny believes his “Smart Voting” strategy — in short, urging people to vote for anyone other than the candidates who belonged to Putin’s United Russia party — was responsible for significant United Russia losses in the Moscow city council.

“The dragon has unclenched its jaws, but not all the way. We have to keep going,” one of the demonstrators said.

“We have to keep demanding to respect our rights, because they have left us no choice but to protest in the streets,” said Lyubov Sobol, another opposition figure who spoke at the rally.

The Jerusalem Post noted that demonstrations of some sort have been held almost every weekend since July, making Sunday’s rally an exceptionally bright flare of a fire that has never been completely extinguished. The latest rally was impressive but still only about half the size of the largest events held before the Moscow elections.