The Turkish parliament endured another of its periodic fistfights on Wednesday, a sizable melee between opposition politicians and members of the ruling AKP party that apparently started when one of the opposition leaders “insulted” President Recep Tayyip Erdogan.

The insult was delivered by Engin Ozkoc, group chairman of the Republican People’s Party (known by its Turkish acronym CHP) at a press conference before the parliamentary session.

The wild exchange of fisticuffs followed thereafter and involved both male and female representatives of the chamber.

Ozkoc later summarized his own remarks from the press conference on Twitter as follows: “A person who became the co-chair of the Greater Middle East Project, who approves the slaughter of three million Muslims, who calls martyrs ‘heads’ is undignified, dishonorable, honorless! This person cannot be the President of the Republic of Turkey!”

Turkish Parliament: A fight broke out between opposition and ruling Party pic.twitter.com/Ji33GGHM18

Erdogan has occasionally described himself as the “co-chairman” or “co-president” of a vaguely-defined “Greater Middle East Project,” by which Erodgan means the Middle East coming together under the leadership of capable administrators and strong defenders of the Islamic faith such as Recep Tayyip Erdogan.

The “slaughter of three million Muslims” comment was probably a reference to Erdogan whistling past the mass graves of the Armenian genocide – which turned into a genocide after efforts to forcibly convert the Christian Armenians to Islam came up short of the Ottoman Empire’s aspirations – although Erdogan has killed quite a few Muslims himself during his career, most recently in Syria, where he recently warned Turkey’s adversaries would be “left without heads on their shoulders” if they failed to withdraw from the region of Idlib province claimed by Syria.

Erdogan is notoriously thin-skinned when it comes to “insults,” and insulting him is actually a violation of Turkish law. In addition to getting pummeled by members of Erdogan’s party after he took the floor in parliament, Ozkoc faces criminal charges for his remarks.

“As he made this statement as the CHP spokesperson, these statements indicate that we are in a new phase of the CHP’s smear campaign against our president and in politics with insults,” one of Erdogan’s lawyers said on Tuesday, ominously noting that the CHP party has not distanced itself from Ozkoc or condemned his remarks. 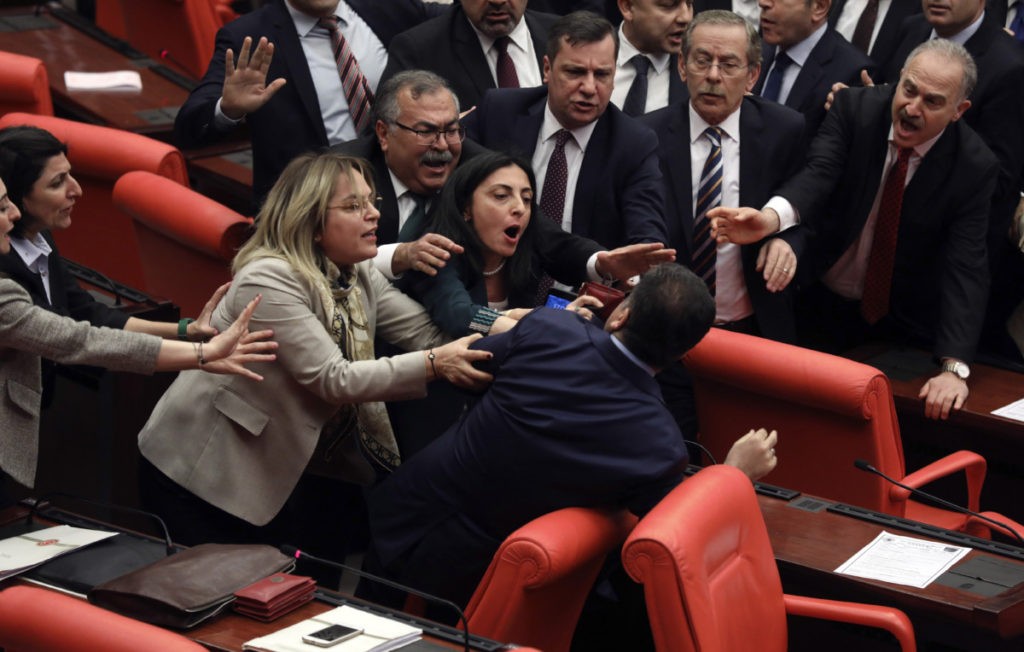 Legislators push each other as a brawl breaks out in Turkey’s parliament in Ankara, Turkey, Wednesday, March 4, 2020. A fight broke out in the Turkish parliament between lawmakers from opposing parties during a tense discussion about Turkey’s military involvement in northwest Syria. (AP Photo)