ROME — Turkish President Recep Tayyip Erdoğan has invited Pope Francis to visit Hagia Sophia, which will revert to being a full-time mosque on July 24.

Turkish Presidential spokesperson İbrahim Kalin said on Sunday that Pope Francis is among the guests invited to attend Hagia Sophia’s reopening ceremony as a mosque this coming Friday.

On July 10, President Erdoğan signed a decree re-designating Hagia Sophia as a “functioning mosque,” reversing the 1934 decision by the Turkish Council of Ministers, led by secular Turkey’s founder Mustafa Kemal Ataturk, that turned the 6th-century structure into a museum.

Built as a Christian basilica under the Byzantine Emperor Justinian in 537 AD, Hagia Sophia was the main seat of the Eastern Orthodox church for centuries, but was turned into an imperial mosque following the 1453 Ottoman conquest of Constantinople — the city that is modern-day Istanbul.

“And the sea carries me a little farther away in my thoughts: to Istanbul. I think of Hagia Sophia, and I am very saddened,” he said.

The pope’s sentiments were echoed by the European bishops, whose spokesman said that converting Hagia Sophia into a mosque “distances Turkey from Europe and it is a blow to the Orthodox Church and to interreligious dialogue.”

The World Council of Churches, which counts 350 churches as members, wrote a letter to Turkey’s president calling for the decision to be reversed. 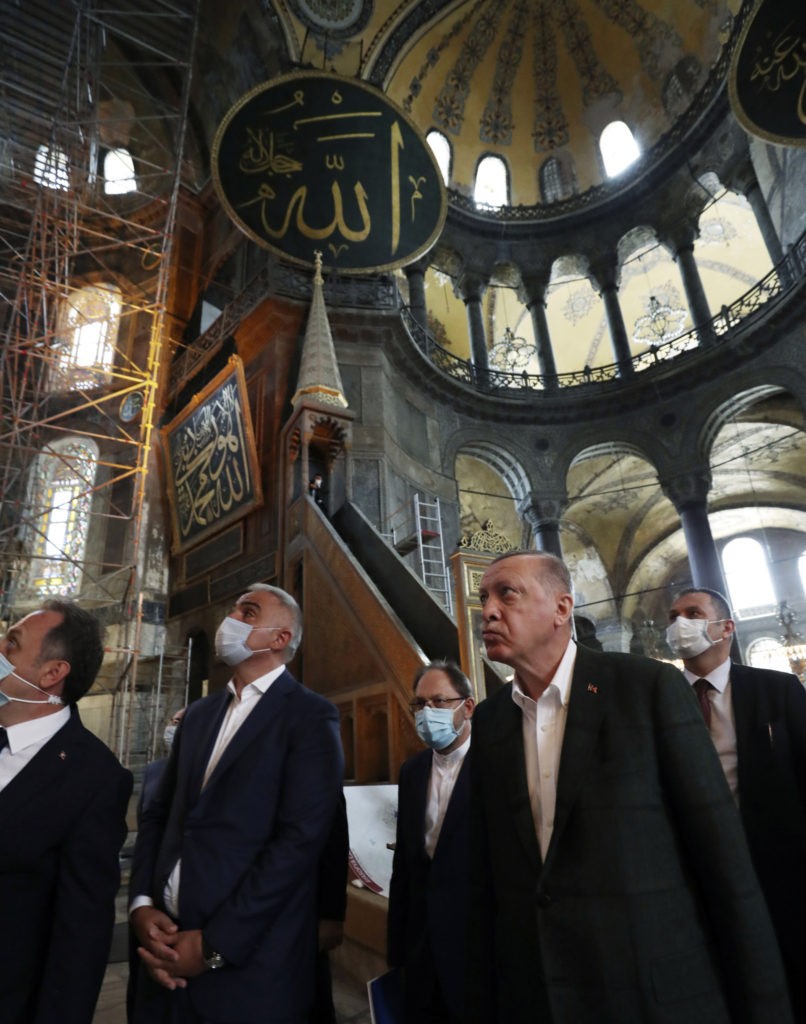 Turkey’s President Recep Tayyip Erdogan, right, and other officials visit the Byzantine-era Hagia Sophia, one of Istanbul’s main tourist attractions in the historic Sultanahmet district of Istanbul, Sunday, July 19, 2020, days after he formally reconverted Hagia Sophia into a mosque and declared it open for Muslim worship. (Turkish Presidency via AP, Pool)

“By deciding to convert the Hagia Sophia back to a mosque you have reversed that positive sign of Turkey’s openness and changed it to a sign of exclusion and division,” the letter stated. “Regrettably, this decision has also been taken without prior notice or discussion with UNESCO regarding the impact of this decision on Hagia Sophia’s universal value recognized under the World Heritage Convention.”

Turkish authorities have said they will not destroy the Christian mosaics and other images that decorate the interior of the temple.

“We are making some arrangements to ensure that during Muslim prayers, the mosaics will be covered but not touched,” Mr. Kalin said.

“The main point here is that there is no damage to these mosaics, depictions, the historical texture, and architecture of the building,” he said.

Kalin also said that Hagia Sophia will continue to be open to believers or non-believers of any religion.

“Reactions to the conversion of Hagia Sophia are based on old views and prejudices – there is religious freedom in Turkey,” he said.

So far the Vatican has issued no public comment regarding the invitation for Pope Francis to visit Hagia Sophia.