WASHINGTON, DC – Jack Keane, a retired four-star general and former vice chief of the U.S. Army, told Breitbart News in an interview this weekend that President Donald Trump ending 40 years of U.S. appeasement toward the Iranian dictatorship moved the world a step closer to the demise of the regime.

Keane said that, in addition to enforcing sanctions and ending the 2015 Iran nuclear deal, Trump’s brokering the restoration of diplomatic ties between Israel and the United Arab Emirates is a game changer.

“The momentum is truly shifting very dramatically against the mullahs,” Keane said. “This is not just a historical event. It’s a geopolitical paradigm shift.”

“I think the steps the United States took this week – and that is, we are finally going to put together a political, economic and military alliance with the countries in the Middle East to confront Iran,” Keane told Breitbart News.

“That I think is the most significant political event I have seen in years,” Keane said. “This president has ended the appeasement of the Iranian regime for 40 years.”

“Democrat and Republican presidents, liberal and conservative, as part of that — have all appeased this regime,” Keane said. “This president is ending that.”

Keane said he believes this is the start of pressures that could lead to the demise of Ayatollah Ali Khamenei and his decades-long grip on Iran.

“There’s going to be many other countries that are going to fold themselves into the alliance,” Keane said. “It’s going to lead to more isolation and more pressure on the regime.”

“And, to be frank about it, I have never seen the mullahs back on their heels as much as they are right now,” Keane said. “And it’s going to get worse for them.”

Keane spoke with Breitbart News in Washington, DC, on Friday where he took part in an international summit of the Iranian diaspora that unfolded through livestreams emanating from 10,000 locations, including inside Iran and from Albania, where the People’s Mujahedin of Iran (MEK) – an affiliate of the nation’s most prominent dissident organization, the National Council of Resistance of Iran (NCRI) – is headquartered.

On a rooftop overlooking the U.S. Capitol, Iranian-Americans gathered to push for a free, democratic, and secular Iran. Near the podium was a memorial to Navid Afkari, an Iranian wrestler executed days ago for taking part in 2018 protests against the Iranian regime. Dozens of roses and red flowers, the symbol for the Iranian resistance, surrounded a huge portrait of Afkari. 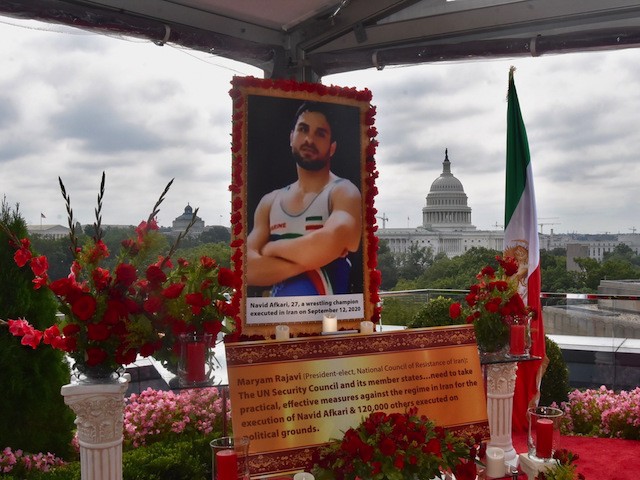 The free Iran summit included a memorial to Navid Afkari, an Iranian wrestler who was executed for protesting against the Iranian regime. (Penny Starr/Breitbart News)

“Today, Navid Afkari lives on in the hearts and struggle of thousands of Resistance Units in Iran who will continue to resist and rise up for freedom and justice,” Maryam Rajavi, president-elect of the National Council of Resistance of Iran, said in the keynote address. 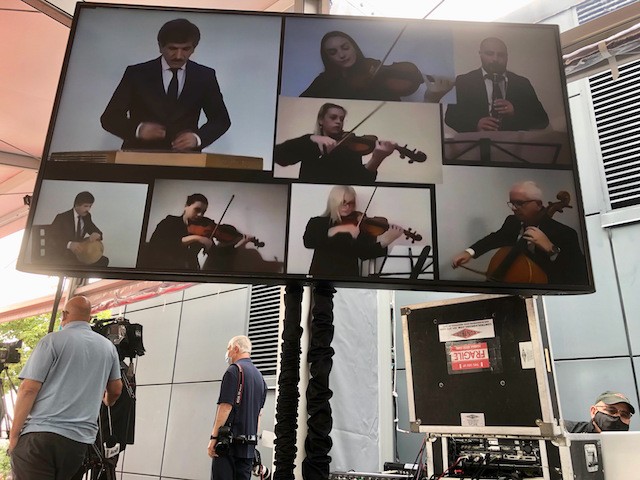 The event, timed to coincide with the opening of the U.N. General Assembly on Sunday, also featured members of Congress who spoke via video at the summit.

“I rise to be able to support the fighters in Iran for human rights, and to stand with those like Madam Rajavi, who want human rights and the fights against the abuses, the horrible abuses that people are facing in Iran who just simply want justice, equality and human rights,” Rep. Sheila Jackson Lee (D-TX) said.

The summit, according to an announcement about it, calls “for justice of 30,000 political prisoners massacred in Iran, primarily activists of the People’s Mojahedin Organization of Iran (PMOI/MEK) murdered in 1988” and “an end to impunity of the regime’s leaders who oversaw the massacre” and to “urge the world to hold them accountable.”