Helicopters busily rescued personnel from the U.S. Embassy in Kabul, Afghanistan, on Sunday, just weeks after President Joe Biden promised that there was “no circumstance” in which that spectacle, remembered from Vietnam, would recur.

Images of the evacuation of the U.S. embassy in Saigon (now Ho Chi Minh City) are seared into the American imagination as a memory of humiliating defeat, as U.S. promises of security for South Vietnam collapsed with the North Vietnamese advance. 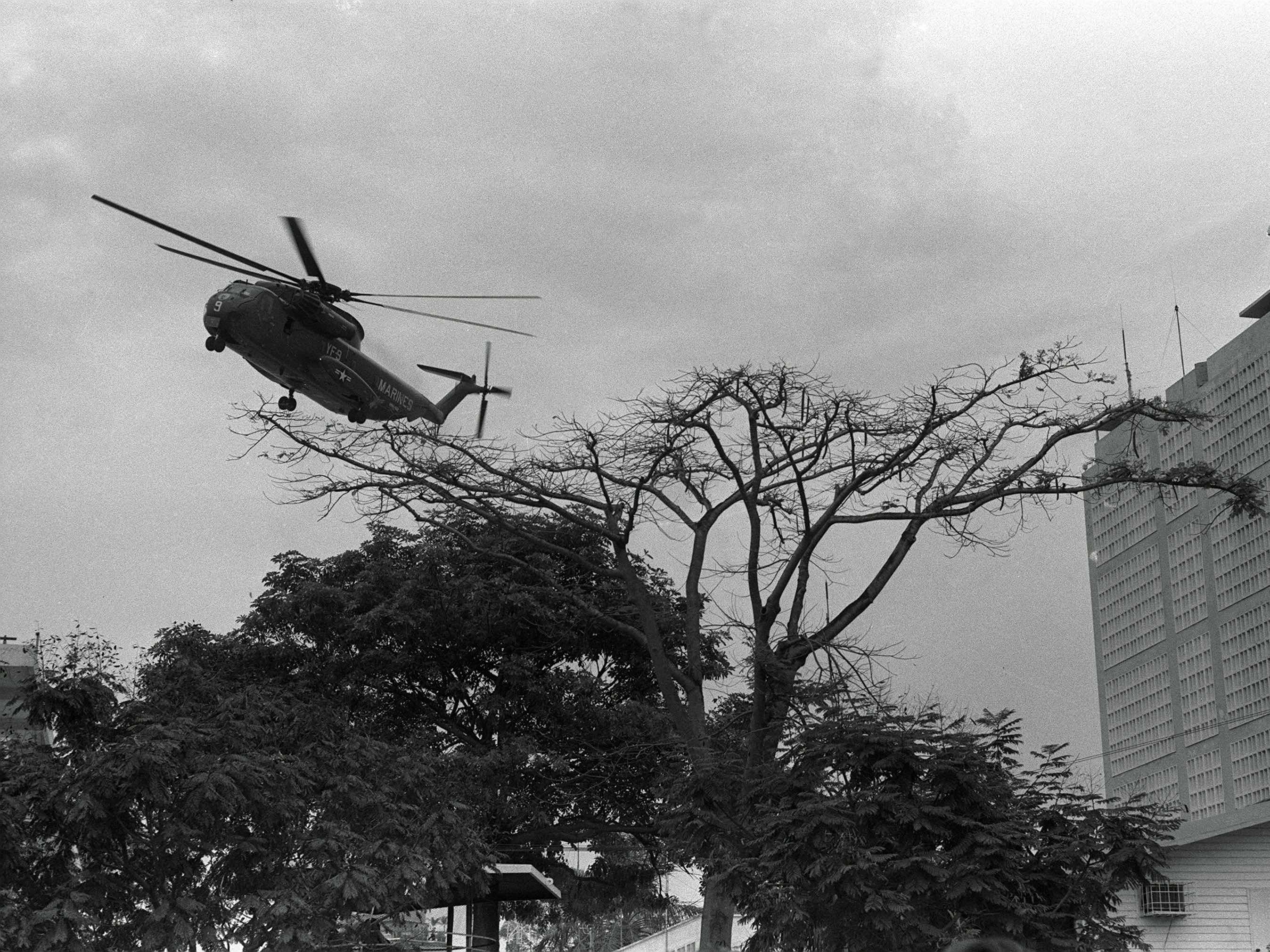 A U.S. Marine helicopter lifts off from the landing pad atop the U.S. Embassy during the evacuation of Saigon Wednesday, April 30, 1975. (AP Photo/phu)

On July 8, Biden had the following exchange with a reporter after remarks on the upcoming withdrawal from Afghanistan:

Q Mr. President, some Vietnamese veterans see echoes of their experience in this withdrawal in Afghanistan. Do you see any parallels between this withdrawal and what happened in Vietnam, with some people feeling —

THE PRESIDENT: None whatsoever. Zero. What you had is — you had entire brigades breaking through the gates of our embassy — six, if I’m not mistaken.

The Taliban is not the south — the North Vietnamese army. They’re not — they’re not remotely comparable in terms of capability. There’s going to be no circumstance where you see people being lifted off the roof of a embassy in the — of the United States from Afghanistan. It is not at all comparable.

This may become the most infamous — and devastating — press conference ever held by an American President. pic.twitter.com/j4kKwyPDVm

At the U.S. Embassy on Sunday afternoon, helicopters ferried American and Western diplomats and civilians to the military side of Kabul airport. One after another, Chinooks and Black Hawks took off from the landing zone, spraying dust.

Below them was a city of traffic jams and roundabouts choked by cars—many of them filled with Afghans trying to reach the airport’s relative safety. Dark smoke, presumably from burning documents, rose from the presidential palace. 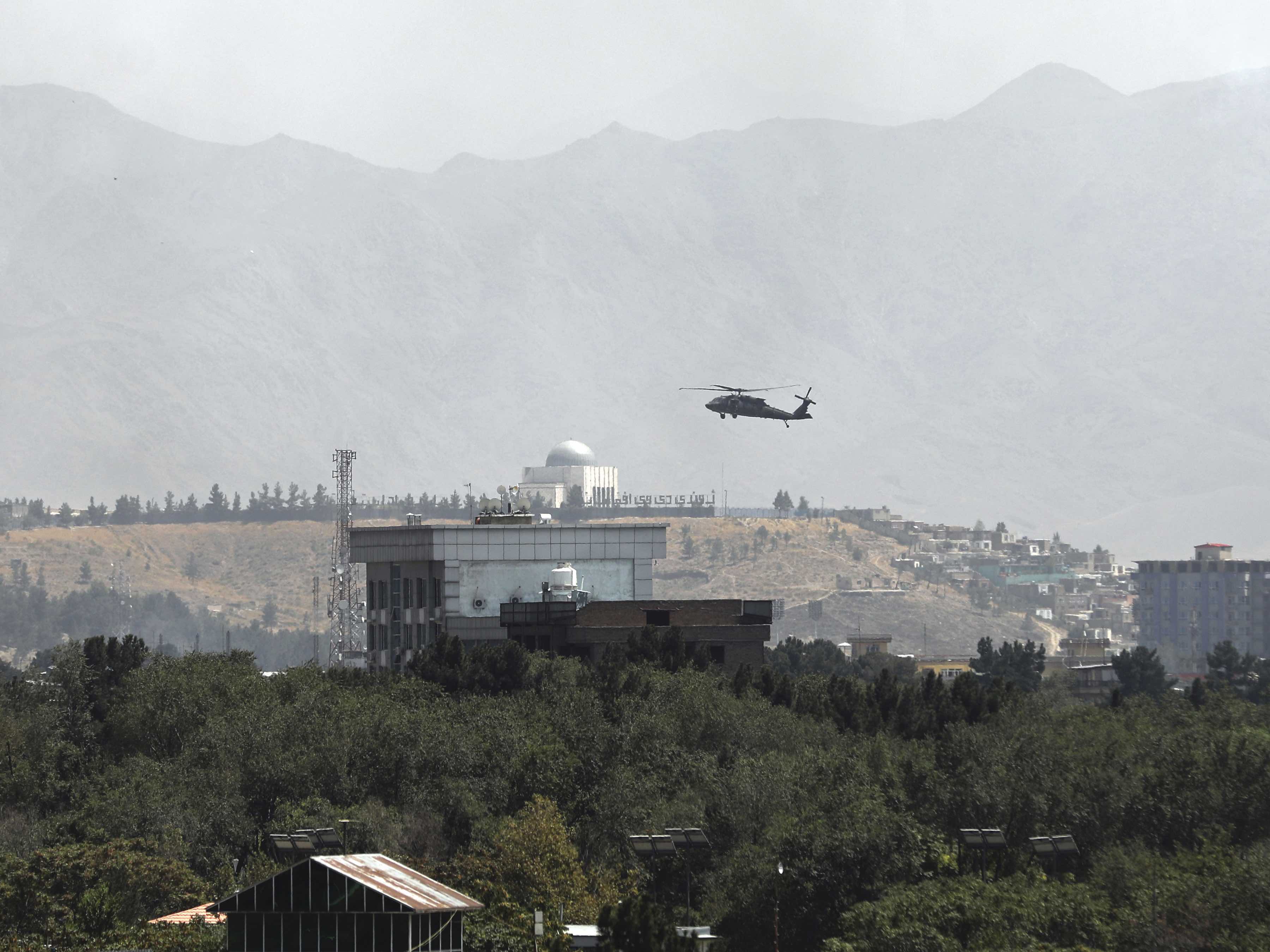 A. U.S. Black Hawk military helicopter flies over the city of Kabul, Afghanistan, Sunday, Aug. 15, 2021. Taliban fighters entered the outskirts of the Afghan capital on Sunday and said they were awaiting a “peaceful transfer” of the city after promising not to take it by force, but amid the uncertainty panicked workers fled government offices and helicopters landed at the U.S. Embassy. (AP Photo/Rahmat Gul)

The embassy has been a refuge for Americans, and had lately, under Biden, been fashioned into an exemplar of “progressive” Western left-wing ideals, as in the following tweet:

Various media reports suggested that the Taliban expected Kabul, and the government itself, to be surrendered soon — potentially within hours.