The Iran-backed Houthi insurgents of Yemen, whose classification as terrorists was revoked by President Joe Biden in the early days of his administration, are closing in on the strategically vital city of Marib and its surrounding oil fields, leaving death, disease, and starvation in their wake.

“After recent advances and fierce fighting, Houthi military spokesman Yahya Sarea said the group’s fighters were on the western outskirts of Marib city and pushing up on other fronts having inflicted many casualties in recent months,” Reuters reported on Thursday.

The Houthis launched a brutal offensive early this year, at roughly the same time Biden was delisting them as terrorists, with the objective of capturing Marib and its surrounding oil fields. Among other horrors, the Houthis launched a missile into a school in March, killing three children. 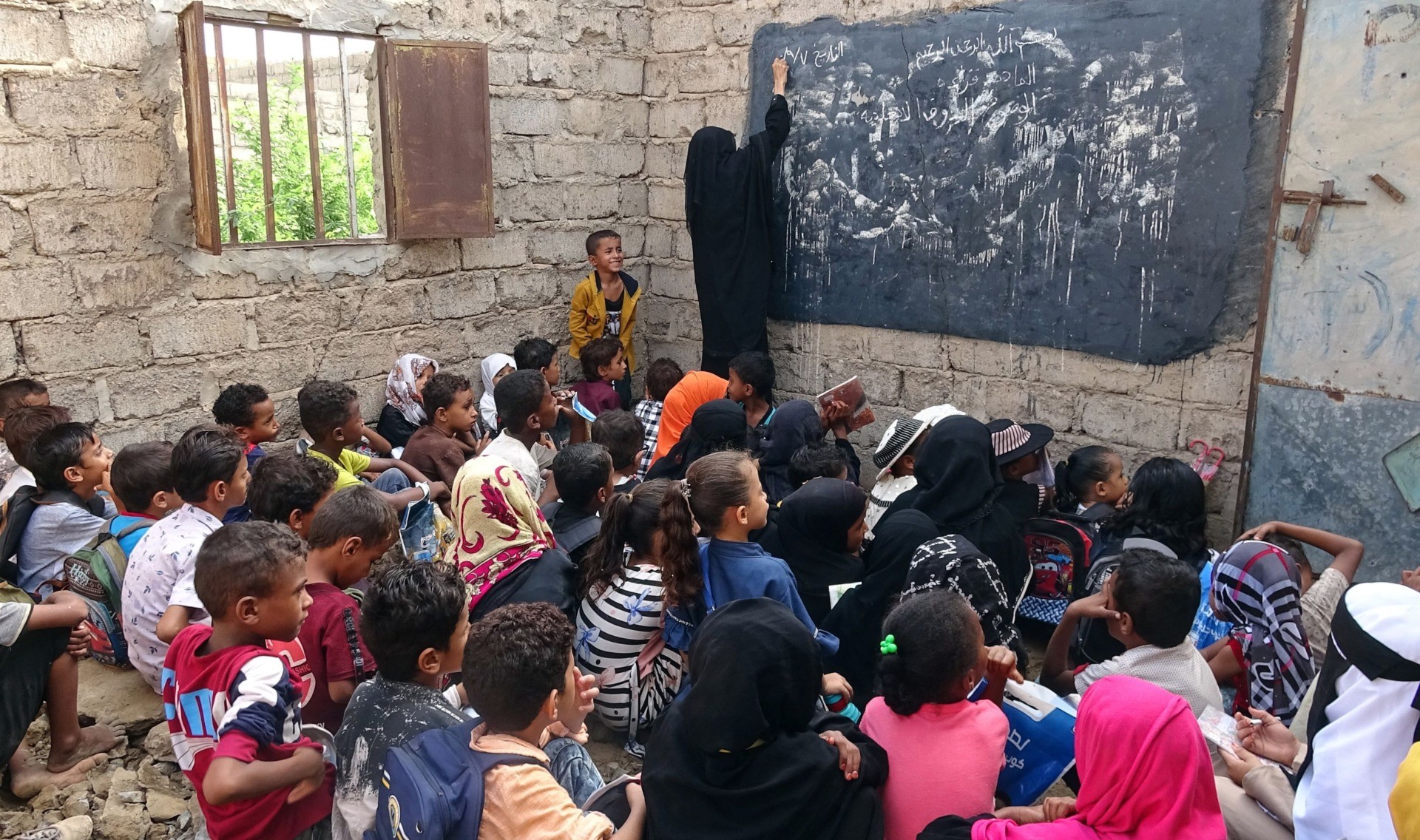 Displaced Yemeni children attend class in a dilapidated school building, in the war-torn western province of Hodeidah, on September 5, 2021. – Many schools in Yemen have been destroyed in the conflict between the government and the Huthi rebels or turned into refugee camps or military facilities. (KHALED ZIAD/AFP via Getty Images)

Government forces and their militia allies inflicted heavy casualties on the Houthis during their three-pronged advance toward Marib, but in late August the Houthis hit Yemen’s largest airbase at al-Anad with missiles and drones, filling local hospitals and clinics with injuries and blunting the government’s advantage in air power. The al-Anad attack proved to be one of the deadliest in the Houthis’ 2021 offensive.

Medical sources in Yemen said on Friday that at least 140 fatalities were inflicted over the past week in the battle for Marib, 93 of them Houthis. The Houthis nevertheless made significant territorial gains, capturing three districts in Shabwa and one on the outskirts of Marib. 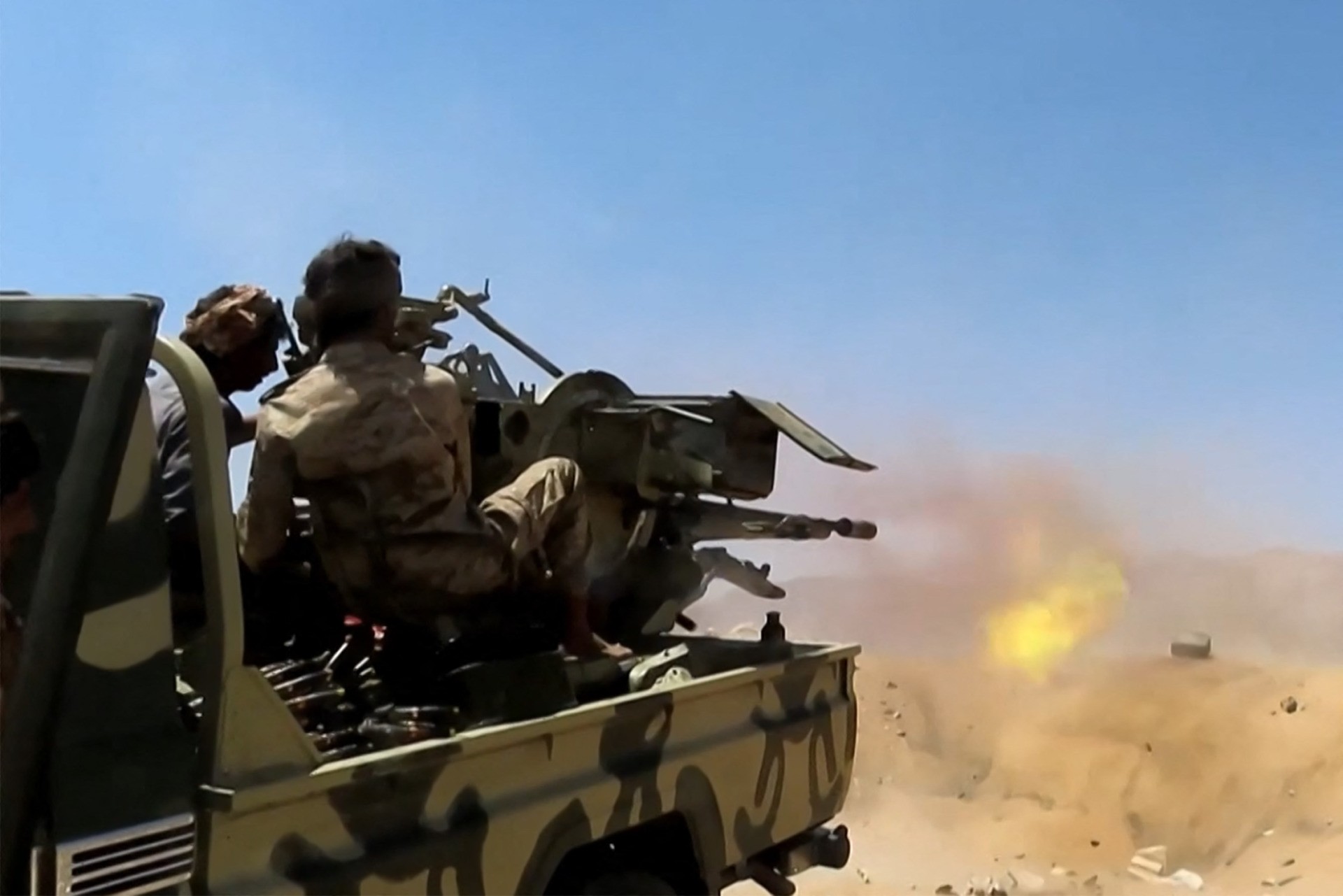 A grab from an AFPTV video shows a fighter loyal to Yemen’s Saudi-backed government firing a turret mounted in the back of a pickup truck (technical) at a position near the frontlines against the Huthi rebel forces in the region of al-Kassara, northwest of Marib. (-/AFPTV/AFP via Getty Images).

According to Yemeni military sources, Houthi forces have closed to within a dozen miles of Marib and are fighting hard for the oil fields of Shabwa to the south, which boast Yemen’s only liquified natural gas terminal.

The United Nations on Thursday renewed its warnings of a humanitarian catastrophe. David Beasley, director of the World Food Program (WFP), told the U.N. General Assembly that food stores are running low, rations for starving Yemenis have been cut, and inflation is making essential goods unaffordable for many residents.

“With food pricing and the lack of fuel, it is catastrophic. We’ve got 5 million people right now knocking on famine’s door, we’ve got 16 million people marching toward starvation,” Beasley said.

He visited al-Sabaeen hospital, in the western city of Sana’a, on Tuesday and said it was “full to the brink” with starving, malnourished children.

“They had to expand into other wards to accommodate all these children,” he said. “It was a horrific scene where there were beds full of children who looked like skeletons.

“It’s clear to see the situation is rapidly deteriorating and the reason children are so severely malnourished is because their mothers are malnourished as well.

“Obviously, that means they are unable to breastfeed their children and they end up in this terrible situation.”

Kelwick confirmed Beasley’s warning that even Yemenis with jobs and income cannot afford to feed their families due to skyrocketing prices, while civilians caught in the conflict zone have little access to food at all.

“Places hit by the most intense conflict, such as Marib, al-Hodeida, Taiz, al-Dhale and Lahij, are among those most in need of humanitarian aid,” the Guardian noted.

The U.S. House of Representatives on Thursday approved a bill that would force the U.S. military to stop providing maintenance and intelligence support to the Saudi-led coalition that has been fighting the Houthis since 2015.

House Democrats accused the Saudi coalition of causing unacceptable collateral damage and civilian casualties with their airstrikes, but seemed untroubled by the Houthis’ acts of aggression, their terrorist strikes on Saudi civilian targets, or the humanitarian calamity caused by their Marib offensive.

“The passage of our amendment as part of this year’s NDAA sends a clear signal to the government of Saudi Arabia that they must end their war of attrition, support a political settlement, and make amends,” said Rep. Ro Khanna (D-CA).

The Houthis are attacking with such ferocity precisely because they anticipate a “political settlement” favorable to their ambitions. The battle for Marib intensified even as U.N. envoy Hans Grundberg held peace talks in Oman.

“Sustainable peace can only be achieved through a peacefully negotiated settlement. It is imperative that all efforts are directed towards revitalizing a political process that can produce lasting solutions that meet the aspirations of Yemeni women and men,” Grundberg said this week.

“We’re ready to achieve peace, but the Houthi militia has not yet agreed to do so, it has continued to deliberately undermine peace efforts and proposals, going on fighting. These indicators show they have never been willing to make peace,” Yemeni parliament speaker Sultan al-Barakani said on Wednesday after meeting with U.S. envoy Timothy Lenderking.

Barakani’s lament was reported by Arab News, which also quoted a dismal report on the Houthis’ oppression of women by the Yemeni Network for Rights and Freedoms:

The rights group also said there had been 770 cases of arrests and kidnapping, 195 cases of enforced disappearance and 70 cases of torture of women in Yemen during the period from Jan. 1, 2015 to June 1, 2021.

It also confirmed cases of torture and degrading treatment against 70 women who were detained in secret and public prisons of the Houthi militia.

This amounted to false charges against their honor, as well as trafficking in their honor – according to what was reported – in the testimonies of some of the released women, the group said, leading to some of them to commit suicide.

The Houthis held a victory march on Wednesday to celebrate the seventh anniversary of capturing the national capital, Sanaa. Celebrants carried signs calling for death to America, Israel, and Saudi Arabia. Iranian state media added its congratulations to the Houthis for their gains in the Marib campaign.