U.S. defense officials announced on Thursday that senior al-Qaeda leader Salim Abu-Ahmad was killed in an airstrike in the Idlib region of Syria on September 20. Observers in Syria had previously noted what appeared to be a drone strike on a vehicle traveling through rural Syria on that date.

“There are no indications of civilian casualties as a result of the strike. This strike continues U.S. operations to degrade international terrorist networks and target terrorist leaders who seek to attack the U.S. homeland and its interests and allies abroad,” Rigsbee added.

Syria’s volunteer Civil Defense team, better known as the White Helmets, and observers such as the London-based Syrian Observatory for Human Rights (SOHR) reported a vehicle was struck by a missile on September 20 while traveling on the Idlib-Binnish road east of Idlib’s provincial borders, killing at least one person and tearing the vehicle in half.

SOHR said the vehicle destroyed on September 20 contained “a militant from one of the radical groups operating in the province” and hinted that the group was “linked to al-Qaeda.”

CENTCOM said last week that it had conducted a “kinetic counterterrorism strike” against an unnamed al-Qaeda leader. 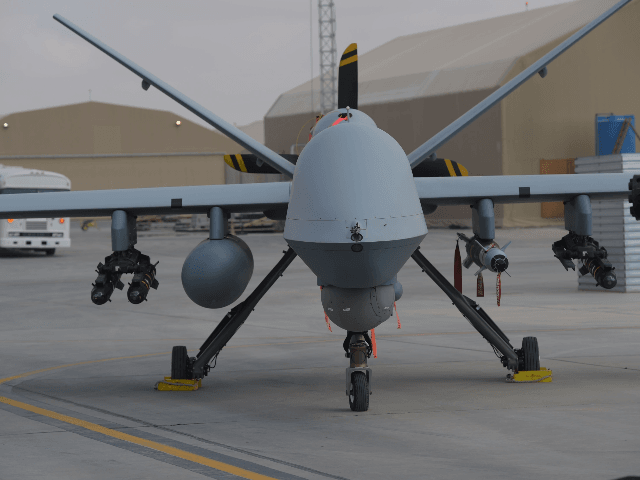 A U.S. Air Force MQ-9 Reaper drone is ready for its next mission somewhere in the Middle East (SHAH MARAI/AFP via Getty)

“Initial indications are that we struck the individual we were aiming for, and there are no indications of civilian casualties as a result of the strike,” CENTCOM said at the time.

Shiite militia forces in Iraq told Russian media on September 13 they observed a similar aerial attack against two vehicles traveling along the Syria-Iraq border. The militia fighters claimed the strike was conducted by the U.S. Air Force. If their claims are accurate, the September 13 strike could have been an earlier attempt to eliminate Abu-Ahmad, or a comparable operation against another target.

“Little is known about Abu-Ahmad, whose name does not seem to appear on U.S. or EU [European Union] sanctions lists of known terrorists,” the UK Daily Mail pointed out.

Al-Qaeda and groups affiliated with it remain active in Idlib and control much of its territory. In fact, current and former al-Qaeda members are currently squabbling over the distribution of territory and accusing each other of betrayal.

A group called Hayat Tahrir al-Sham (HTS) that broke away from al-Qaeda in 2017 has reportedly been hunting down members of an al-Qaeda affiliate, Hurras al-Din, and refusing calls for “Sharia arbitration” (that is, arbitration under Islamic law) to resolve territorial disputes.

It would not be surprising if HTS, or another feuding faction, found a way to let the U.S. military know when a senior al-Qaeda leader happened to be driving along a certain highly-exposed road.