The government of India on Monday effectively froze the funding of Mother Teresa’s Missionaries of Charity, a move that may have been intended to placate Hindu mobs rampaging against Christmas celebrations.

The Indian government claimed on Monday the State Bank of India locked the Missionaries of Charity’s (MoC) accounts at the organization’s request, after some “adverse inputs were noticed.”

Another statement from the government said the charity’s permission to operate under India’s foreign contribution laws was rescinded on Christmas Day and MoC did not file an appeal. MoC would therefore be unable to accept foreign funds until its permission under the Foreign Contribution Regulation Act (FCRA) is restored.

MoC is headquartered in West Bengal, whose Chief Minister Mamata Banerjee disputed these official accounts. Banerjee and other critics called it “shocking” and “disgraceful” that the administration of Prime Minister Narendra Modi would block funding for the venerable charity, jeopardizing the people under its care and impoverishing its employees. 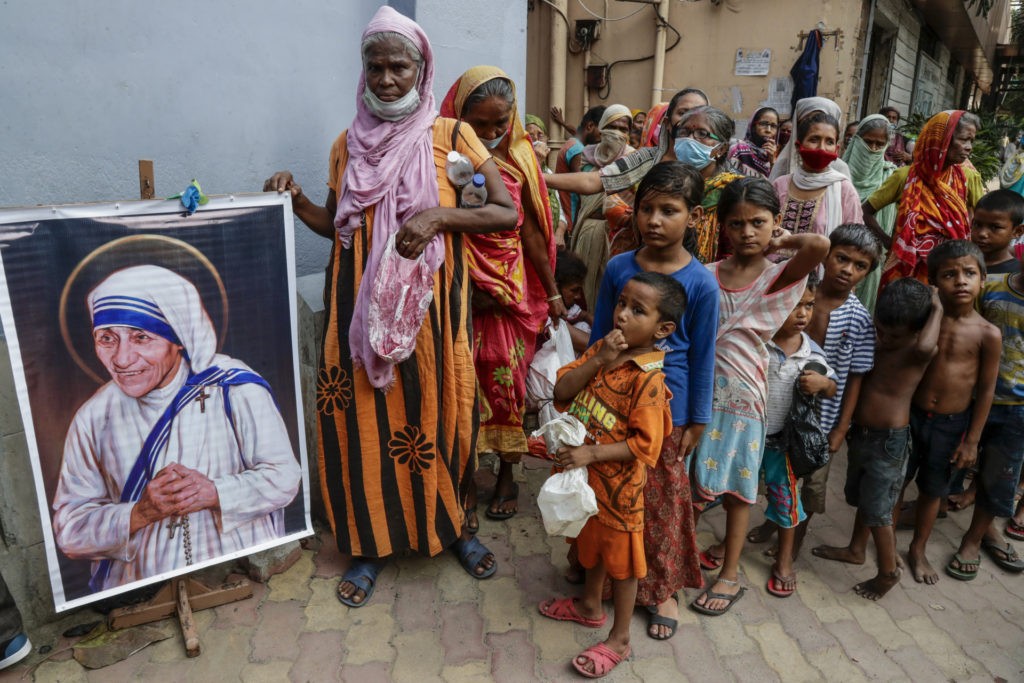 Homeless people gather beside a portrait of Saint Teresa, the founder of the Missionaries of Charity, to collect free food outside the order’s headquarters in Kolkata, India, Aug. 26, 2021. (AP Photo/Bikas Das)

The MoC issued a statement on Monday saying it applied for renewal of its permission to operate under FCRA, but the “application has not been approved.” The ministry said its centers will not access their foreign contribution accounts “until the matter is resolved.”

“FCRA registration of Missionaries of Charity has neither been suspended nor canceled. Further there is no freeze ordered by the Ministry of Home Affairs on any of our bank accounts,” MoC said.

Critics of the Modi administration were not mollified by this statement, accusing the government of intimidating the MoC into assisting with its “shameless damage control tactics,” as fiery West Bengal lawmaker and opposition party leader Derek O’Brien put it. O’Brien was suspended from parliament for the rest of the current session last week because he threw a rule book at the chairman during an especially heated debate over farm legislation, a very hot topic in India.

“In freezing the bank accounts of Missionaries of Charity Sisters and Brothers congregations, Government agencies have given a cruel Christmas gift to the poorest of the poor,” said Father Dominic Gomes, Vicar General of the Archdiocese of Calcutta.

In freezing the bank accounts of Missionaries of Charity Sisters and Brothers congregations, Government agencies have given a cruel Christmas gift to the poorest of the poor.

Father Gomes said the MoC funding freeze was the “latest attack on the Christian community,” a reference to growing hostility from Hindu nationalists who accuse Christians of seeking to undermine their movement by converting Hindus.

“The bogey of ‘conversion,’ always been raised as justification, is more than patently false, [it] boggles the mind with its incredulity,” Gomes said.

“Had any Christian organization seriously tried to ‘convert’ with the efficiency they run their educational, medical and social intuitions; there would indeed be many more Christians converted in the 2000 years Christianity has been on Indian soil that the 2.3% minority today,” he argued.

The MoC controversy “comes days after hardline Hindu vigilante groups disrupted Christmas church services in parts of India, including in some states ruled by Modi’s party ahead of local elections in the coming months,” Reuters noted Monday.

Reuters quoted Indian media accounts of “disruptions” at Christmas celebrations over the past week, “including the vandalizing of a life-size statue of Jesus Christ at Ambala in Haryana, a northern state governed by Modi’s nationalist Bharatiya Janata Party (BJP).”

The statue of Jesus at the Holy Redeemer Church in Ambala was “vandalized and desecrated” by two suspects who broke into church grounds after midnight and were caught on security cameras while they damaged the facility.

“It is a very sensitive issue for the Christian community and our religious sentiments are deeply hurt. In the CCTV footage, it is very obvious that this is intentionally done,” Father Patras Mundu of the Holy Redeemer Church said in the complaint he filed with local police.

Father Mundu noted the Church is “very old and historical,” having been established in the 1840s, and there has “never been any such incident” before.

Deutsche Welle quoted local reports of demonstrations against “Christmas celebrations and religious conversions” outside churches, and some violence perpetrated against “non-Christian revelers” at a Presbyterian church by members of a Hindu nationalist group called Bajrang Dal.

“We have nothing against the Christians who have every right to celebrate Christmas. Our issue is with the Hindus who went against their dharma to sing Merry Christmas instead of observing Tulsi Divas,” a self-described leader of Bajrang Dal said in a statement on social media.

Tulsi Pujan Divas is a celebration of uncertain origin and very recent vintage which involves decorating a tree, ringing chimes, and celebrating the significance of the basil plant, whose Indian name tulsi is derived from the name of a Hindu goddess.

Skeptics say Tulsi Divas looks suspiciously like a holiday invented solely to compete with Christmas, and groups like Bajrang Dal apparently view it as an excuse to harass Hindus for making merry under the wrong holiday tree.