Public prosecutors for the United Arab Emirates (U.A.E.) issued a warning on Monday to citizens who “mock” the federal government’s official efforts to combat the Chinese coronavirus, reminding them they face a maximum punishment of two years in prison and a fine of roughly $54,450 for the offense, according to U.A.E. law.

The U.A.E.’s Federal Emergency Crisis and Disasters Prosecution office issued a statement through the state-run Emirates News Agency (WAM) on January 10 in which it “warned” the U.A.E. public “not to spread rumours or false information about the preventive measures adopted by authorities to curb the spread of COVID-19 [Chinese coronavirus] and not to flout them.”

The prosecution office said it chose to issue the warning “[i]n light of the recent circulation of photos and videos on social media spreading information from some COVID-19 patients on the Al-Hosn application, accompanied by comments and songs mocking the precautionary measures and calling on others to flout them.”

The “Al-Hosn” application is an official U.A.E. government smartphone app used to contact trace coronavirus patients and generally monitor the health status of U.A.E. citizens and residents. U.A.E. prosecutors said the recent leak of information gathered by the Al-Hosn app together with the alleged “mocking” of public health protocol threatened the emirates’ federal efforts “to address the pandemic.”

“[W]e, therefore, call upon members of the community to refrain from this behaviour, which is punishable by the law,” the prosecution’s statement read. 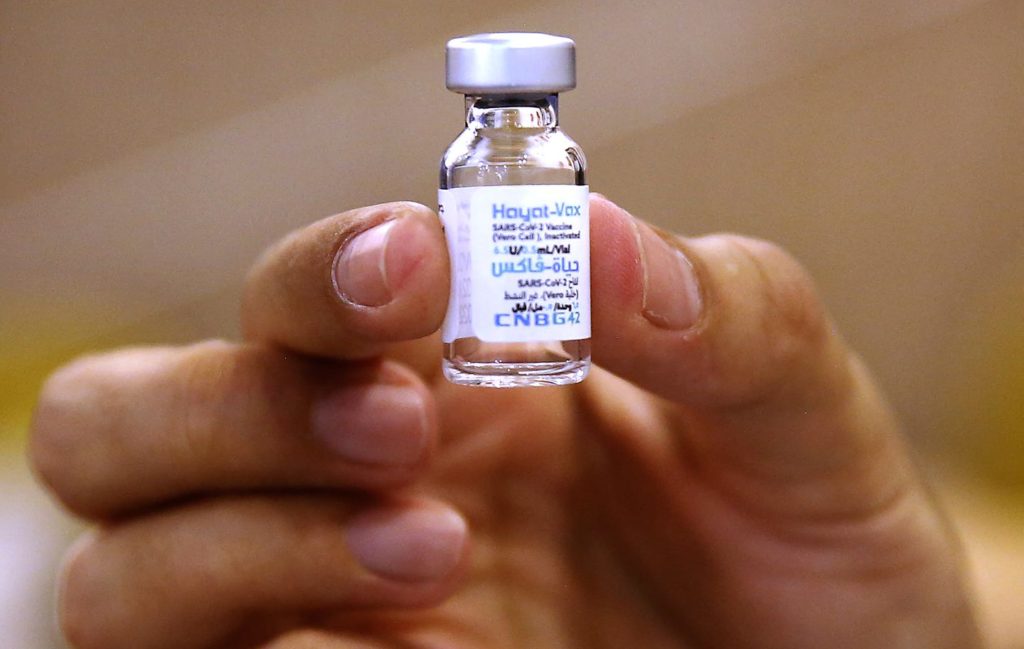 A health worker holds up a vial of the UAE-made “Hayat-Vax” COVID-19 coronavirus vaccine, a locally-produced version of China’s Sinopharm vaccine, at a vaccination centre set up inside a school in Iran’s capital Tehran on October 7, 2021. (Photo by -/AFP via Getty Images)

“[S]uch actions are punishable with administrative sanctions or the penal sanction stated in Federal Decree-Law No. 34 of 2021 on combatting rumors and cybercrime,” the office noted.

The U.A.E. Public Prosection Office published a video via social media on January 2 announcing official penalties associated with Article 52 of the emirates’ “Federal Decree-Law No. 34 of 2021,” which specifically aims to combat the spread of “rumours and cybercrime” and the “publishing [of] false news” online.

The minimum penalty for people found guilty of such Internet crimes is “one year in jail and a fine of Dh100,000 [$27,225],” according to the Middle East Monitor, which reviewed the video.

“[I]f the published or shared information results in agitating or stirring up public opinion against the State authorities or institutions or are committed at the time of pandemics, crisis, emergencies, or disasters, the punishment will be two years in jail and a fine of Dh200,000 [$54,451],” the news organization reported on January 3.

The U.A.E. government has required all federal government offices to “admit only employees and visitors who have green status on their Al Hosn app” since January 3, according to the National, an Abu Dhabi-published newspaper.

To achieve a “green status” on the Al Hosn app, U.A.E. citizens and residents must be “fully vaccinated” against the Chinese coronavirus with an inoculation approved for use by the U.A.E. health ministry.

“It requires a booster shot six months after a second shot to stay active,” the National noted of the Al Hosn app’s “green status” in December 2021.

A “booster shot” is an additional dose of a vaccine a person receives after he or she has already completed a full series of inoculation.