Candice Sero, the woman trampled by mounted police last Friday when they moved in to break up the Freedom Convoy protest in Ottawa, gave an interview to Canada’s Rebel News, published on Monday.

Sero took the opportunity to reassure listeners that she is indeed “alive” and “still here,” dispelling social media rumors that her injuries were fatal and that her death was hushed up by the authorities. She also refuted some early statements by police that no one was seriously injured during their action against the Ottawa protesters. 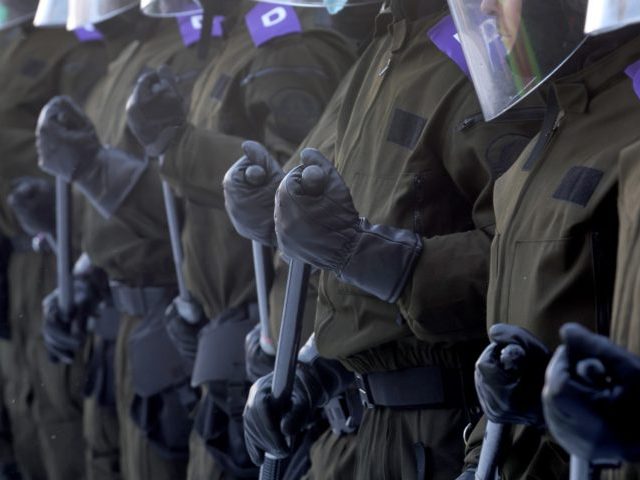 “I’m still alive. I’m still here. Thank you to everyone out there. I’m okay. I’m bumped and bruised, I’m sore, but I live to stand another day,” she said. 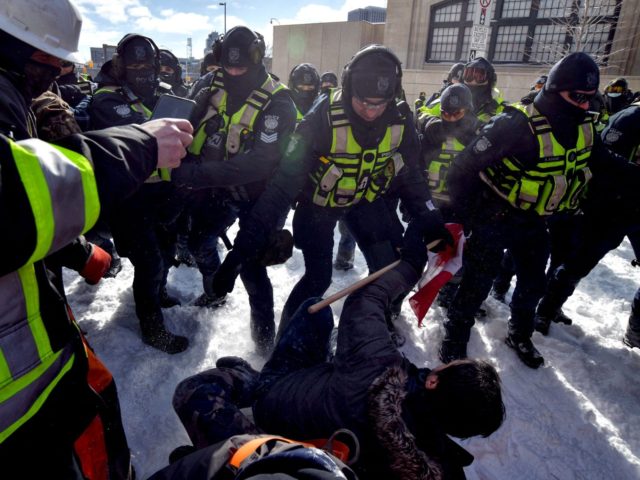 Police clash with demonstrators against Covid-19 mandates in Ottawa on February 18, 2022. (ED JONES/AFP via Getty Images)

Sero described herself as an aboriginal Mohawk who lives in the Tyendinaga Mohawk Territory. She attended the Ottawa protest with the aid of a mobility scooter.

When Rebel News asked what she felt as she saw the mounted police bearing down upon her, Sero simply repeated what the protesters were shouting at that moment: “Hold the line.”

“That’s what I tried, anyway,” she said with a laugh, although at other points during her interview she appeared to sigh in pain.

“After they trampled me, there was an officer that – I think a couple of them – that kicked me,” she said. “I got a big bruise on the back of my thigh. And another one dragged me by my coat off the premises.”

Sero said she returned to her group of protesters afterward, because “outside of our circle, it didn’t feel safe.”

“When I was back in with the Convoy, I felt safe,” she said.

Sero said none of the police tried to help her after she went down. “They were all showing me anger and aggression,” she recalled.

“They aggressively ‘helped’ me out of the area,” she said sarcastically. “I was told to leave and don’t come back, or if I come back, I would be arrested.”

“The ambulance came, took me to the hospital, and there was only one doctor on. He sent me in for an x-ray. It wasn’t a very good stay at the hospital – but it wasn’t their fault either, because there’s no doctors or nurses to fill these hospitals, to help people that are hurt,” she said.

Sero said she participated in the Freedom Convoy protest because she wanted to open the eyes of Canadians to the suffering caused by harsh pandemic measures.

“There are mothers and fathers in nursing homes, dying by themselves. Why?” she asked.

“Do you know how many people I’ve seen in these last two weeks that said, ‘Thank you. Thank you for stepping up,’” she continued tearfully. “And out of all those elders – there was a lot of elders that cried on my shoulder because they were so happy to have a human contact, because they’ve been deprived for these last two years.”

Sero laughed in derision when shown the Ottawa police statement that claimed no one was seriously injured when they moved against the protesters.

“Where did that other guy go? The other guy that really got stomped by the horses? Where did he go?” she asked, referring to another protester that was knocked to the ground by the mounted police.

“How can we have trust in a prime minister that doesn’t come and speak to the people?” she asked

Sero said she felt “anger” at the way she was treated, and guessed there are “probably people back home that are angry for what they did – not just to me, but to everybody that this happened to.”

“It’s sad that it had to happen that way,” she said.