A group of about 40 women converged on the education ministry in Kabul on Saturday, chanting “bread, work, and freedom!” to protest the Taliban’s hideous treatment of women. The Taliban responded by beating the protesters with rifle butts and firing gunshots in the air to break up the rally.

Extraordinary image from yesterday’s protest by these brave Afghan women. One year ago, Afghan girls went to school – Afghan women held positions of authority across Afghan society – all this was overturned with exceptional speed when the Taliban swept to power #Afghanistan pic.twitter.com/z34In3DLFU

The protesters carried a banner reading “August 15 is a black day,” referring to the day in 2021 when the Taliban took over Kabul. Another of their slogans was “Justice, justice, we’re fed up with ignorance.”

“We had a protest. The Taliban violated our protest. They shot into the air and detained the girls for around two to three hours. (Islamic Emirate forces) seized their phones,” Afghanistan’s independent Tolo News reported, using the Taliban government’s preferred name for itself.

“The Afghan women will not take their hands away from their struggles and fights,” another protester declared. 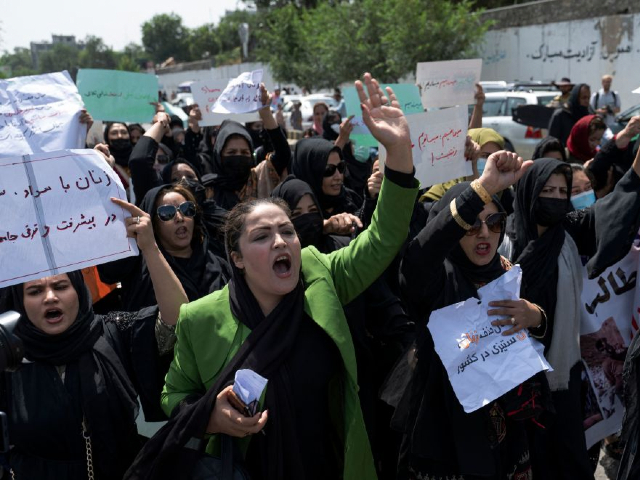 The Taliban was able to break up the rally and scatter the demonstrators by clubbing the women with their rifles.

“Unfortunately, the Taliban from the intelligence service came and fired in the air. They dispersed the girls, tore our banners and confiscated the mobile phones of many girls,” protest organizer Zholia Parsi said. 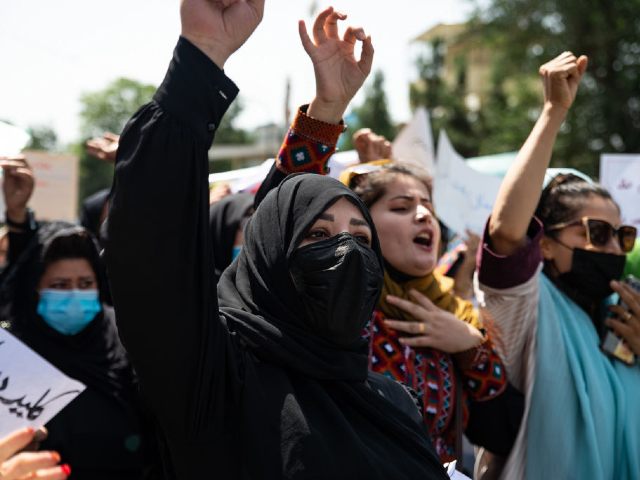 Taliban fighters fired into the air as they dispersed a rare rally by women as they chanted “Bread, work and freedom” and marched in front of the education ministry building, days ahead of the first anniversary of the hardline Islamists’ return to power, on August 13, 2022 in Kabul, Afghanistan. (Nava Jamshidi/Getty Images)

Tolo News reported its journalists were also assaulted by Taliban goons, and some of their equipment was stolen. Several international correspondents also said their cameras were stolen.

“During today’s protest, a Tolo News reporter was detained by the security forces in the area for nearly five hours. Our cameraman was beaten. The camera was taken from him, which we have not received yet. We are unhappy about this action and we consider it against the freedom of speech and independent media,” Tolo News Deputy Director Zirak Faheen said. 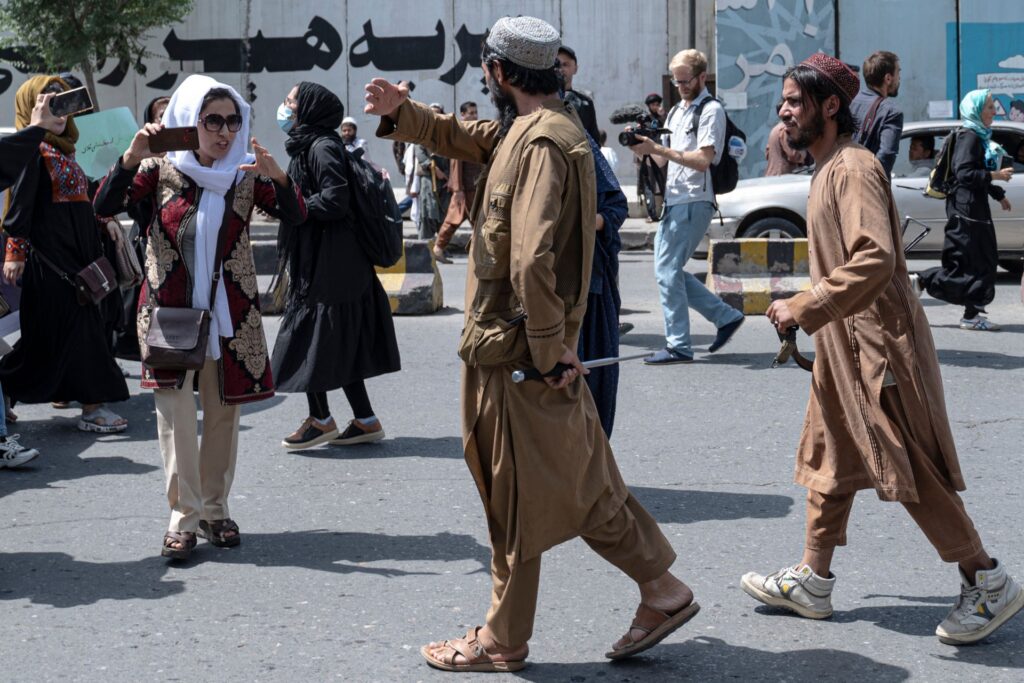 Taliban fighters walk as they fire into the air to disperse Afghan women protesters in Kabul on August 13, 2022. (WAKIL KOHSAR/AFP via Getty Images)

Al Jazeera News reported some protesters sought refuge in shops near the education ministry, only for Taliban fighters to chase them down and beat them. The Taliban’s enforcers were reportedly angry that some of the women marched without face coverings, defying an edict from Supreme Leader Hibatullah Akhundzada. 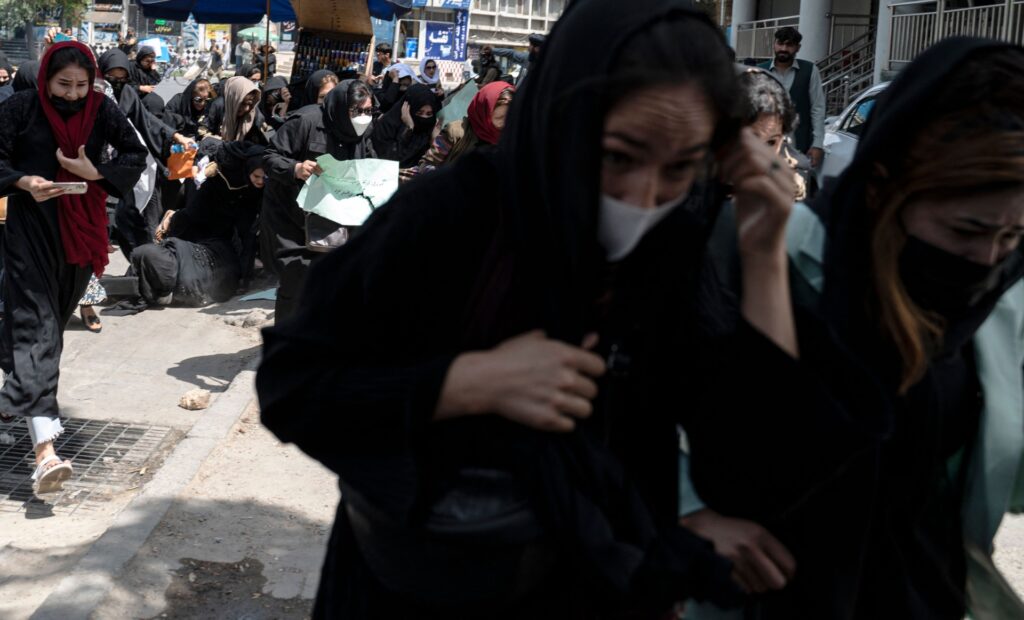 Taliban fighters fire into the air to disperse Afghan women protesters in Kabul on August 13, 2022. (WAKIL KOHSAR/AFP via Getty Images)

One protester hopefully told the BBC the tide might be turning because the Taliban was much more brutal when suppressing previous demonstrations by women.

“They didn’t beat us much this time. They acted differently than earlier protests. They fired shots in the air,” she said.

“Though we’re afraid we came out to advocate for the rights of girls, so that at least the Taliban will open schools for them,” she added defiantly.

The BBC noted that Afghanistan “is the only country in the world that officially limits education by gender – a major sticking point in the Taliban’s attempts to gain international legitimacy.”

“It was important because it’s nearly the first anniversary of the Taliban rule and we wanted to say that we don’t consent to this government,” a demonstrator told NPR, requesting anonymity because she feared retaliation.

The UK Guardian on Monday explained that Afghan women have plenty to protest, and many of them are trying to flee the Taliban’s brutish “Islamic Emirate” entirely.

“After a year of this government, there is no change in the situation. We are showing that we won’t stay silent. It’s important to show the world that Afghans don’t accept this. We will stand against injustice,” she said.

“It’s true – the overall situation for women has got worse. Women are living in fear and feeling hopeless. There is no future for them under the Taliban,” Human Rights Watch researcher Fereshta Abbasi told the Guardian.

Another Guardian article over the weekend collected grim testimonies from Afghan women, who spoke of being terrorized and abused for violating mandatory hijab orders, forced into poverty because they were not allowed to work, deprived of an education by the Taliban’s cruel orders, and forced into hiding because the Taliban is still hunting for employees of the government it overthrew.

“Until the Taliban took power, I worked as a police officer. My husband had died but I could support my two daughters on my police salary, I could give them everything they needed. Now I have lost my job, and the Taliban have been hunting down women who worked in the security services. I am still terrified they will find me,” one woman said.

“For the past seven months, I have been reduced to begging on the streets to feed my girls. I sit all day on the street under a burqa so that nobody recognizes me and informs on me. I don’t recognize who I have become,” she lamented.

“One day, two boys threw some coins at me, and one said I was a prostitute. I went home with only enough to buy two loaves of bread for my children, and cried all night,” the former police officer said.