Satellite photos analyzed by the Associated Press on Tuesday revealed the much-celebrated first shipment of grain to leave Ukraine under a deal with its Russian invaders, officially bound for starving Lebanon, wound up in Syria instead.

Syria is a Russian client state whose dictator, Bashar Assad, owes his continued survival to a timely Russian military intervention in 2015.

The Russian invasion of Ukraine raised the specter of a worldwide food crisis since Ukraine is the world’s fourth-largest exporter of grain. An estimated 20 million metric tons of grain were trapped in Ukrainian ports by Russia’s blockade.

Even with reduced harvests due to the invasion, Ukrainian President Volodymyr Zelensky predicted the amount of grain frozen by the Russian blockade would more than triple by the end of the year. Some of the world’s most impoverished and malnourished nations stood to suffer from the loss of both Ukrainian and Russian agricultural exports, including African countries and war-torn Yemen, which obtains at least a million tons of grain from Ukraine every year.

Russia and Ukraine signed agreements in late July to restart shipments of grain and fertilizer from both Ukrainian and Russian ports. 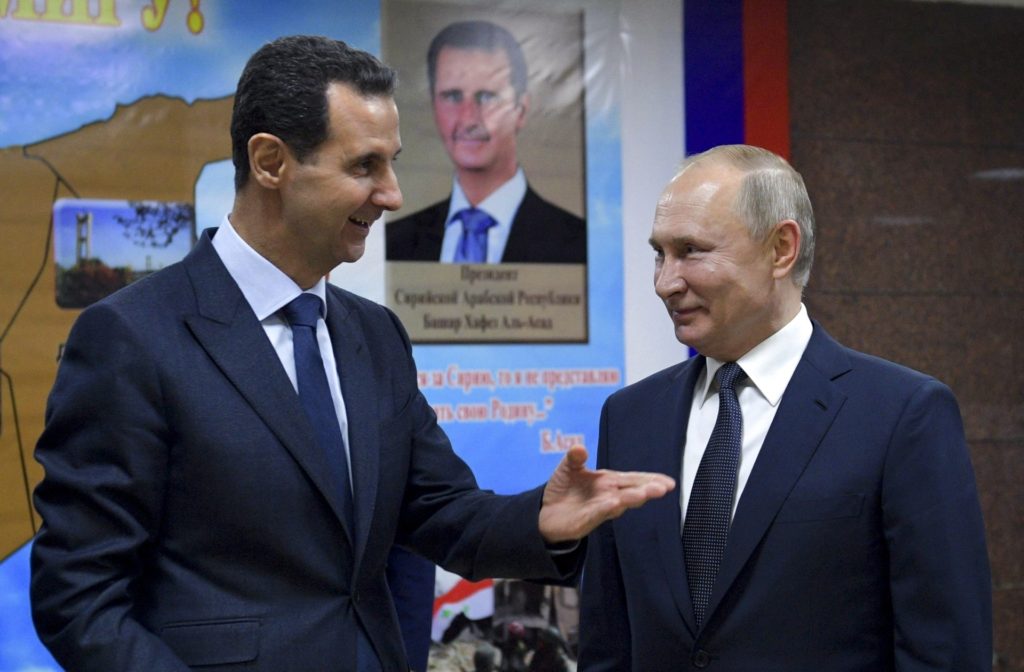 The United Nations and Turkey helped to broker the deal that guaranteed safe passage for commercial vessels sailing from Odessa and two other important Ukrainian ports. The agreement was set to last for 120 days, with an option for renewal. 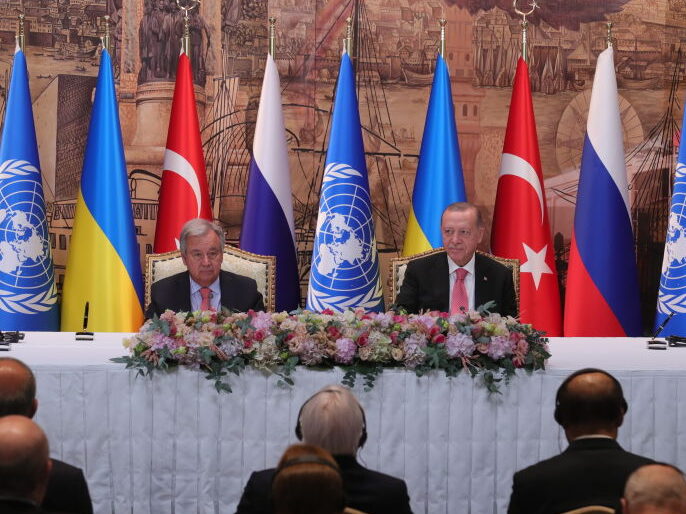 Russian and Ukrainian representatives refused to sit together at the signing ceremony in Istanbul, raising some skepticism about how well the shipping agreement would be honored, while U.N. Secretary-General Antonio Guterres praised it as “a beacon of hope, a beacon of possibility, a beacon of relief, in a world that needs it more than ever.” 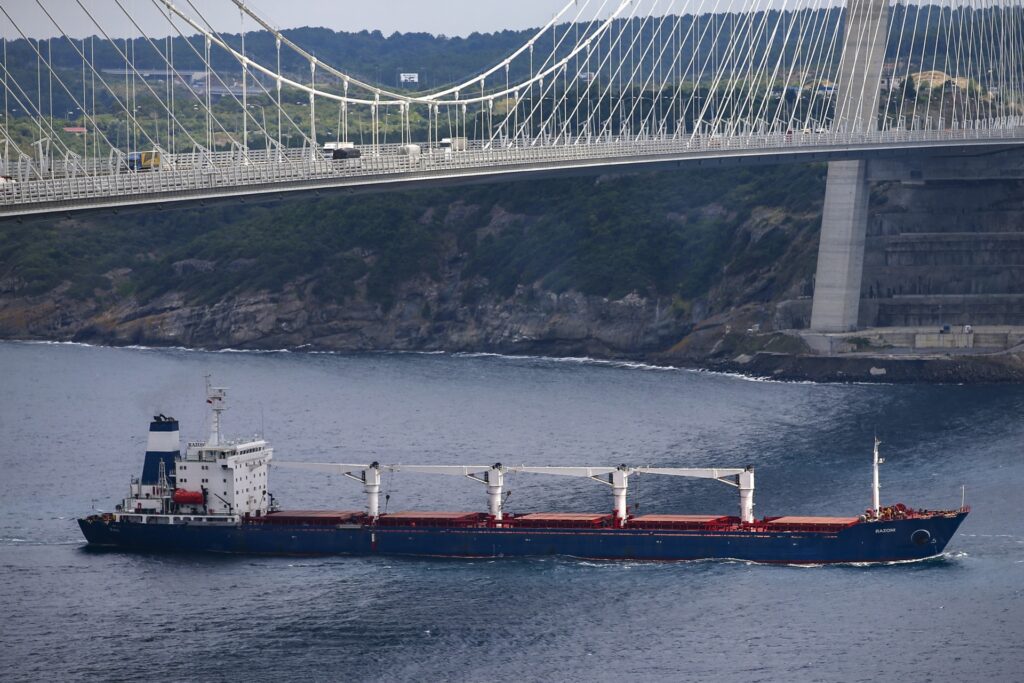 The first commercial vessel to sail from Odessa, a Sierra Leone-flagged freighter called the Razoni, departed on August 1 with much fanfare. The ship carried 26,000 metric tons of corn bound for Lebanon, with an inspection stop planned for Istanbul after it crossed the Bosphorus Strait.

Lebanon is suffering from just about every crisis imaginable, very much including a food crisis. The U.N. estimates 90 percent of Lebanese families are coping with food shortages and many are teetering on the edge of malnutrition, with a large number of potential economic crises poised to push them right over. 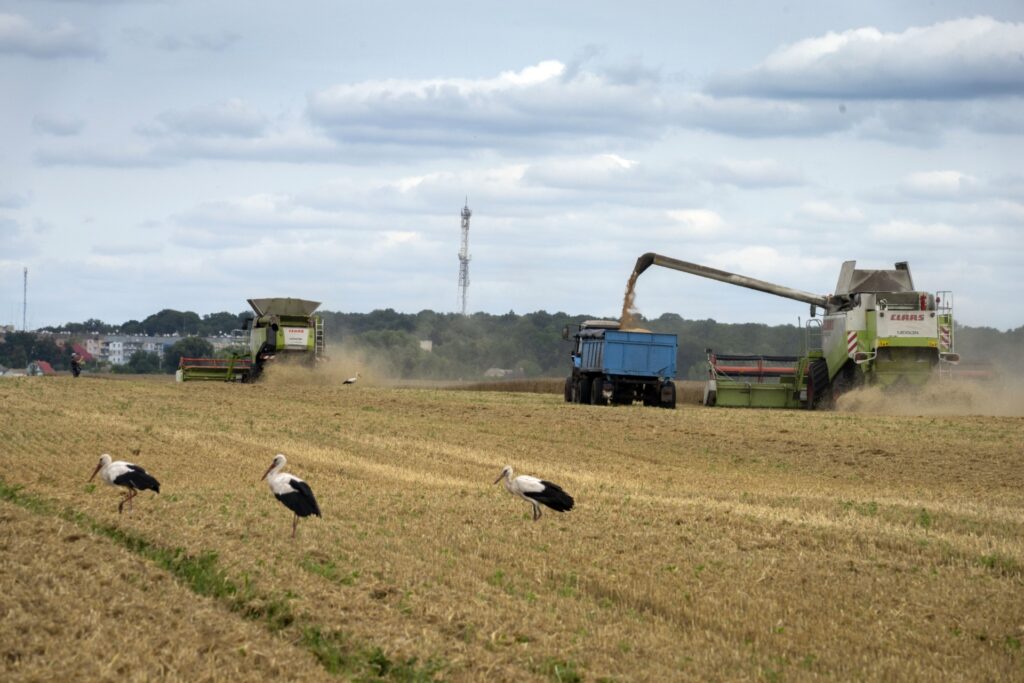 Storks walk in front of harvesters in a wheat field in the village of Zghurivka, Ukraine, Tuesday, Aug. 9, 2022. (AP Photo/Efrem Lukatsky)

When the Razoni arrived in Lebanon a week after leaving Odessa, the buyer in Lebanon refused to accept its cargo of corn “due to delays in delivery terms.” The shipment was delayed about five months by the Russian invasion.

“The shipper is now looking for another consignee to offload his cargo either in Lebanon/Tripoli or any other country/port,” the Ukrainian embassy in Lebanon reported.

The Associated Press on Tuesday said satellite images showed the Razoni docked in the Syrian port of Tartus, right next to the port’s grain silos.

“Data from the Razoni’s Automatic Identification System tracker shows it had been turned off since Friday, when it was just off the coast of Cyprus, according to ship-tracking website MarineTraffic.com. Ships are supposed to keep their AIS trackers on, but vessels wanting to hide their movements often turn theirs off. Those heading to Syrian ports routinely do so,” the AP observed.

The AP further noted that “Syria has already received Ukrainian grain taken from Russian-occupied territory amid Moscow’s war on Kyiv,” including a shipment of stolen grain Egypt refused to buy from the Russians, so Syria probably was not anyone’s notion of an ideal destination for the first shipment of Ukrainian products.

The U.N. said it no longer monitors ships departing under the Ukraine-Russia agreement after they pass their inspections in Istanbul, while the Ukrainian government said it was not responsible for cargoes after they left Ukrainian ports.

The U.S. State Department likewise said it has no control over “who buys the grain shipments or their final destinations.”

“What matters most to us are a couple things: one, that Ukraine is appropriately compensated for the grain, the foodstuff, for the crops that it is in this case providing. And that the food gets to where it is needed most,” said State Department spokesman Ned Price, even though Ukraine’s food ending up in Syria would seem to violate that second condition.

Several other ships have departed from Ukraine since the Razoni, including the Lebanese-flagged cargo ship Brave Commander, which sailed on Tuesday with 23,000 metric tons of wheat bound for Ethiopia. The Brave Commander is the first ship chartered by the U.N. World Food Program (WFP) to bring Ukrainian food products to countries in danger of famine.

Baffles estimated the value of these grain shipments, couple with anticipation for more exports to come, was enough to lower the World Bank’s global food price index by 12% since its high point in April. Food nevertheless remains 14% more expensive than it was last year.