Rep. Jim Jordan (R-OH) said on Wednesday’s edition of the Breitbart News Daily podcast with host Alex Marlow that investigating political corruption at the Department of Justice (DOJ) will be a top priority of House Republicans in the forthcoming 118th United States Congress.

Jordan, who will likely become chairman of the House Judiciary Committee, identified the DOJ’s abusive, arbitrary, and politically selective enforcement of federal law as contrary to the rule of law.

He recalled a 1,000-page report, which was released Friday by Republican members of the House Judiciary Committee and included testimonies from FBI whistleblowers detailing what they described as the DOJ’s “politicization.”

“We’re committed to getting after that as aggressively as we can, and doing it in a way that is consistent with the Constitution,” he remarked. “I will just tell you what our report said, because one of the whistleblowers came to us — and it was supported by others — that the FBI leadership — again, not rank-and-file agents — but the FBI leadership, and specifically the Washington Field Office, is rotted to its core.”

He continued, “That means you’ve got to have a major overhaul, and the way you do that in Congress is you show exactly how bad it was — that’s our job — and then, hopefully, by showing it, that pushes them back and gets them to throttle back all the crazy things they’re doing, and then you have to get a new president who will bring in the appropriate attorney general who’s willing to fix things up and clean things up.” 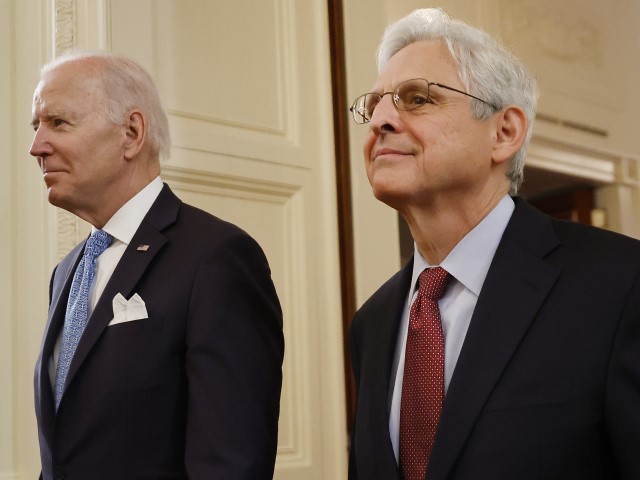 President Joe Biden and Attorney General Merrick Garland walk into the East Room for a ceremony at the White House on May 16, 2022, in Washington, DC. (Chip Somodevilla/Getty Images)

“We’re going to focus on it as much as we possibly can, because I think it’s just one of those fundamental issues to what America is really about.”

Jordan concluded by characterizing a partisan Justice Department as an existential threat to American greatness.

“You don’t have this great country if you have a Justice Department that’s political, that is targeting its political opponents and not treating people equally under the law,” he said, “and that, unfortunately, is what we have in a huge way, as evidenced by the record number of FBI agents who have come to talk to us as whistleblowers.”