From the archives of the extreme progressive left comes this little ditty written in 2001 by SDS founding member, and DSA Vice Chair, Steve Max.

In November 2001, just 8 weeks after the devastating terrorist attacks on New York and DC, Steve Max delivered a speech to the progressive “USAction Delegation Assembly”, on the topic of taking advantage of the new crisis as an opportunity to advance a progressive agenda.

The speech reads like Ward “little Eichmanns” Churchill and Rahm “never let a good crisis go to waste” Emanuel, all rolled up into one offensive Progressive rant.

Why does any of this matter? Because Steve Max, as a co-founder of Citizen Action (which later became USAction) and the Midwest Academy, is one of the people who likely trained SEIU’s Andy Stern, Rahm Emanuel, and even President Bracak Obama, in the Alinsky method of organizing toward revolution. 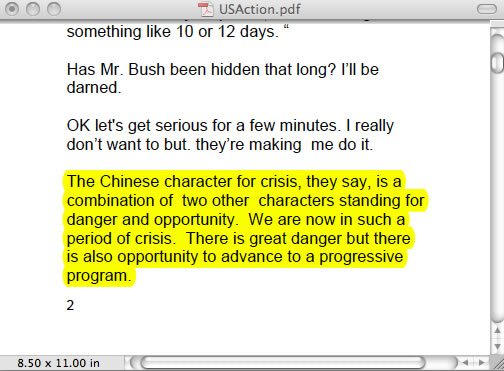 Mr. Max makes a couple of worthy points in his speech, however they are lost in a sea of moral equivalence and cynical political opportunism. Just 8 weeks after the deaths of 3000+ innocent people, who’s only crime was that they were judged as “infidel” by their islamist attackers, Steve Max opines to the progressive community:

The Chinese character for crisis, they say, is a combination of two other characters standing for danger and opportunity. We are now in such a period of crisis. There is great danger but there is also opportunity to advance to a progressive program.

Mr. Max goes on to make the intellectual argument that 9/11 was likely ‘America’s chickens coming home to roost’. He doesn’t use that specific language, but he might as well have.

This requires nothing less than a massive reversal of America’s political and economic role in the Middle East. It means making peace with people we don’t like, and applying intense pressure to people we do like. It means putting in more resources than we take out, and an end to supplanting local cultures with fast food and Hollywood .

Not to worry, those roosting chickens provide the perfect opportunity to advance ideas like….socialized medicine!

All of us, the Democrats, the citizen organizations and Labor should demand restoration of the public health system. It was heavily dismantled in favor of for-profit medicine and HMOs. How can anyone now say that they are for national security but not health funding.

President Barack Obama is deeply connected to Steve Max’s Midwest (SDS-DSA) Academy and Citizen Action. Back in his Chicago days, then State Senator Obama was asked to deliver the Key Note address a fund-raising dinner for their sister organization, Citizen Action (Co-founder of the ACORN Working Families Party). 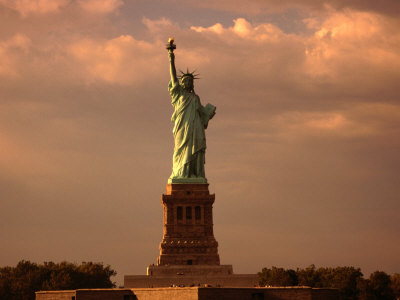 Click here to read about an AFSCME alum of the Citizen Action’s Midwest Academy, gushing about Steve Max, Saul Alinsky, and Paul Booth (mentioned above in the Wiki quote).

Steve Max is a Democratic Socialist.

Andy Stern is a Democratic Socialist.

Rahm Emanuel is a Democratic Socialist.

If you are an adventurous political junkie who really wants to drill down into a detailed accounting of the connections between President Obama, SDS, and the Weather Underground, read New Zeal Obama File #35