I was in downtown Baltimore Monday morning taking care of some business, so I thought I’d stroll a block over and check out the “Occupy Baltimore” crowd. Well, the word “crowd” might be an overstatement. There were about as many people as there would be homeless people on a normal day, only with tents and literature rather than Starbucks cups for holding spare change. And it’s the literature I found most interesting. 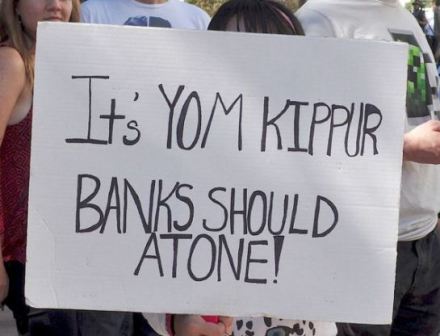 Among the literature I picked up off of their table was one titled “Security Statement.” What it said, and what it implied, was rather disturbing:

As the Security Committee of Occupy Baltimore, we release this statement to ensure the safety of our newly forming, delicate yet strong community.

Sexual abuse and assault are dehumanizing acts for the survivor as well as the abuser. It strips people of their right to safety, dignity, and respect, basic values which embody many of the intentions behind Occupy Baltimore. As a vibrant community, we recognize and give power to these values and the rights of survivors.

OK, saying you’re against “sexual abuse and assault” isn’t controversial, but do you really have to say it? Why isn’t it understood? As it turns out, that’s just the beginning of the weird. The entire “Security Statement” is about sexual assault and abuse.

Sexual abuse or assault at Occupy Baltimore is in violation of our values, and will not be tolerated. It is an explicit policy of Occupy Baltimore to prohibit abuse by any members of the community upon another person. Violation of this policy will result in the abuser no longer being welcome at the occupation.

So sexual abuse or assault are against “explicit policy” and will get you shunned? What about arrested? Those things are crimes, after all. Shouldn’t Occupy Baltimore, like every other group or individual, encourage people to contact the police to get these predators off the street? You’d think so, but you’d think wrong:

Though we do not encourage the involvement of the police in our community, the survivor has every right, and the support of Occupy Baltimore, to report the abuse to the appropriate law enforcement.

So if someone were sexually assaulted, a horrible experience, they wouldn’t be discouraged to contact the police, the “occupy community” would rather handle it internally. That’s just perverse.

Any member of the Occupy Baltimore community who believes he/she/they have been a victim of, are aware of, or suspect a commission of sexual abuse, are encouraged to immediately report the incident to the Security Committee. T (sic)

The point person for dealing with these situations will be Koala! (sic) Largess, (443) 642-XXXX.

Survivors of Sexual Abuse will be given the support, resources, and assistance needed for their emotional and physical health.

So if you’ve been raped or sexually assaulted, don’t call the police; call someone named “Koala.” You can’t make this up, mostly because women’s groups would be protesting you if you did.
And that’s just side one:

The Occupy Baltimore prohibits retaliation against any member, survivor, or outside person who reports in good faith a complaint of an abuser or who participates in any related inquiries. False accusations of sexual abuse in bad faith can have serious consequences for those who are wrongly accused. Occupy Baltimore prohibits making false and/or malicious sexual abuse allegations, as well as providing false information during an inquiry. Anyone who violates any part of this policy will not be welcome at Occupy Baltimore.

They’re setting up their own court system here, where the ultimate punishment, no matter the severity of the offense, is banishment from a tent city. This is sexual assault we’re talking about here, not taking someone’s cupcake out of their lunch in the fridge.

The last part is “Investigation and Follow-Up”:

Occupy Baltimore’s Security Committee will make every reasonable effort to keep the matters involved in the allegation as confidential as possible while still allowing for a prompt and thorough inquiry. All allegations of abuse will be treated seriously and thoroughly investigated.

If the survivor wishes to involve law enforcement, in order to obtain physical evidence of the assault, you must report the incident within 72 hours or the assault as collection and preservation of evidence is critical. Occupy Baltimore will also work to supply the abuser with counseling resources to deal with their issues.

The Occupy Baltimore Community has a Zero-Tolerance policy for any sexual, physical, or mental abuse of or by a community member.

So allegations of sexual assault will be kept from authorities. They “do not encourage the involvement of the police,” but if you’re gonna do it, do it within 3 days. I don’t know about you, but I’ve seen enough episodes of “Dateline” to know you report these things immediately, not after seeking guidance from the Hippie Council. And, in typical liberal fashion, they offer counseling not only to the victim but the perp as well.
Maybe everyone can join together for a nice drum circle at the end of the day and let bygones be bygones.
It’s rather disturbing that this group of semi-organized (at best) amateurs would set up a parallel, internal system of justice that discourages involving law enforcement like they were their own country. What’s more disturbing is that assault victims might abide by these suggestions, and perpetrators of such a crime could get away with only a shunning by this small group and some counseling.