From the Iowa Department of Public Safety and the State of Iowa Division of Criminal Investigation, the following press release:

Des Moines, IOWA — Today, Friday, January 20, 2012, Zachary Edwards, age 29, from Des Moines, Iowa, was arrested and criminally charged with Identity Theft, an Aggravated Misdemeanor (Iowa Code 715A.8(2)). Edwards turned himself in to Iowa Division of Criminal Investigation (DCI) agents this afternoon at the Polk County Jail. He was then booked into the jail with a set bail of $2,000, cash or surety.

According to the Criminal Complaint, on June 24, 2011, Edwards fraudulently used, or attempted to use, the identity of Iowa Secretary of State Matt Schultz and/or Secretary Schultz’s brother, Thomas Schultz, with the intent to obtain a benefit, in an alleged scheme to falsely implicate Secretary Schultz in perceived illegal or unethical behavior while in office.

Edwards was the 2008 Iowa New Media Director for Barack Obama’s campaign. The Iowa Republican reported earlier that he is also the Director of New Media for Link Strategies, but the website has apparently since scrubbed all mention of Zach Edwards. However, you can see an earlier snapshot of the page through WayBackMachine. 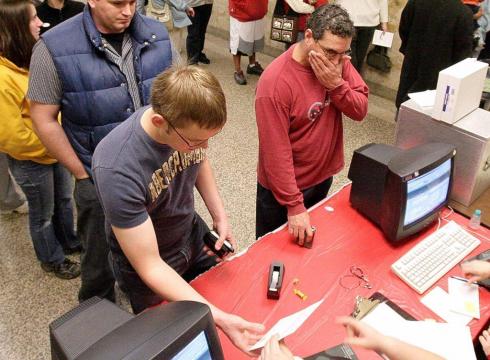 Link Strategies is a Democrat-affiliated political campaign management, research and communications firm in Iowa, which has worked on projects and campaigns for clients like the SEIU and other labor unions, California Governor Jerry Brown’s independent expenditure committee, Iowa Senator Tom Harkin, and many others.

The founder of Link Strategies, Jeff Link, is very actively engaged in the Democrat party’s strategies, having served as “media consultant to the Obama for President Campaign, coordinating branding, all paid media and polling in 25 states, including seven battleground states (VA, NC, FL, CO, NM, NV, MT),” according to his own bio (link to preserved snapshot from 1/10/2012). He served as Senator Tom Harkin’s chief of staff from 1997 to 1999 and directed Sen. Harkin’s 2008 reelection campaign.

There has been nothing released to date by officials to indicate that Link Strategies was involved with or aware of Edwards’ activity.

Since his surprise victory over incumbent Michael Mauro in November 2010, Secretary of State Schultz has been a target of the Iowa Democratic Party. Interestingly, on June 24, the same day as Zach Edwards alleged crime, Under the Golden Dome, a blog connected to Iowa Democrats, launched a three-part series of articles critical of Matt Schultz. They were based on documents obtained through an open records request from “a tipster.” The blog alleged that a batch of emails from Schultz’s office “raise some serious questions about his ability to remain independent and ensure election integrity”.

Just 15 days earlier, on June 9, the Iowa Democratic Party filed an ethics complaint against Schultz, claiming the Secretary of State of used public resources to campaign against presidential hopeful Jon Huntsman. The Iowa Ethics and Campaign Disclosure Board dismissed the complaint on July 19.

This is still a developing story, and we will continue to research much further and report on any additional findings or new developments.

I feel the duty to point out that this is very similar to other tactics from some of the left we’ve been observing over the last several months. While I haven’t personally observed anyone having gone so far as to steal one’s identity, I have witnessed similar efforts in which the individuals have gone to great lengths to publish false accusations, including crimes, that are clearly intended to cause a great level of distress for their targets (and that’s putting it mildly). We will report more on this particular tactic in the very near future.