Today, two top Obama campaign officials fibbed on national television, explaining that they didn’t know about the case of Joe Soptic, a former employee of GST Steel who appeared in an ad by an Obama-associated Super PAC, Priorities USA Action. That ad controversially – and falsely – claimed that Bain Capital’s shutdown of GST Steel caused Soptic to lose his health insurance, his wife to lose her health insurance, and eventually, her death from cancer due to unaffordability of health care.

This morning, senior campaign advisor and former White House press secretary Robert Gibbs said, ‘This is an ad by an entity that’s not controlled by the campaign. I certainly don’t know the specifics of this man’s case.” Stephanie Cutter, deputy Obama campaign manager, said, “I don’t know the facts about when Mr. Soptic’s wife got sick, or the facts about his health insurance.”

Today, during a press gaggle with Press Secretary Jay Carney and Jen Psaki, Psaki said, “We don’t have any knowledge of the story of the family.  As you know, campaign finance rules in that regard are in place for a reason.” 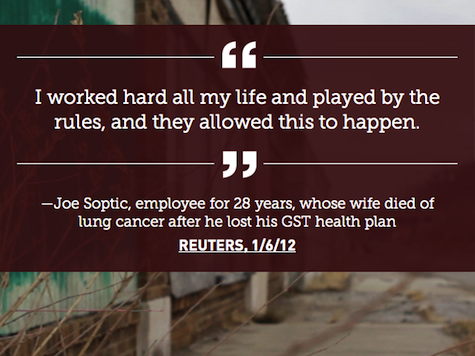 That slideshow appears to have been put up in May, coincident with the campaign’s video about GST Steel featuring Soptic.

But that wasn’t all. On May 14, Soptic spoke on an Obama campaign conference call. Here’s what he had to say on the call:

“After we lost our jobs we found out that we were going to lose our health insurance and that our pensions hadn’t been funded like Bain promised they would be. I was lucky enough to find another job as a custodian in a local school district. That gave me some health insurance but I couldn’t afford to buy it for my wife. A little while later she was diagnosed with lung cancer. I had to put her in a county hospital because she didn’t have health care. And when the cancer took her away, all I got was an enormous bill. That put a lot of stress on me. I thought I would be paying it off until I died myself.”

For the Obama team to claim ignorance about Soptic while spinning his story precisely the same way as Priorities USA Action did — and then to run a conference call off the story — shows both coordination and lying.