We are going to punish our enemies and we’re gonna reward our friends who stand with us on issues that are important to us. -President Barack Obama, October 2010

Government Accountability Institute (GAI) President and Breitbart News Senior Editor-At-Large Peter Schweizer makes the stunning charges and lays out the evidence in his new book, Extortion: How Politicians Extract Your Money, Buy Votes, and Line Their Own Pockets. Schweizer appeared last week on 60 Minutes and Hannity after the New York Times published two articles on the book’s investigative findings.

The Foreign Corrupt Practices Act was created in 1977 to ban American companies doing business overseas from bribing foreign officials. Executives found guilty of violating the law can face up to 20 years in prison. The law was written with the help of lawyers at Covington & Burling, the former law firm of Attorney General Eric Holder and former DOJ Criminal Division head Lanny Breuer.

On its website, the firm boasts, “Covington lawyers have a unique command of anti-corruption laws, in part due to our role in helping draft the Foreign Corrupt Practices Act in 1977.” The firm describes itself as “a leading voice in the private bar on US legislation and policy guidance relating to FCPA enforcement and compliance.” Breuer has since left DOJ and gone back through the revolving door to Covington where he makes nearly $4 million as vice chair of the firm. His duties, of course, include helping clients navigate “anti-corruption matters.”

“For the first 30 years of the FCPA, the Department of Justice brought just two to three cases a year against companies,” said Schweizer in an interview with Breitbart News. “In 2009, the Obama Justice Department sent the number of investigations soaring to at least 120.” 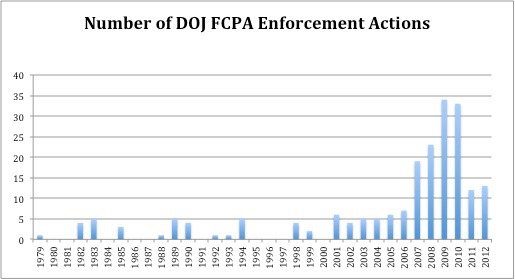 “DOJ tells companies they must hire a law firm to ‘monitor’ their FCPA compliance, which can cost up to $10 million a year,” he explained. “This creates a huge business opportunity for Covington & Burling, especially since Breuer is on the outside at Covington and Holder is on the inside at DOJ.”

That arrangement, says Schweizer, makes the FCPA the perfect weapon for political extortion and wealth extraction.

Legal scholars say the Obama Justice Department has radically expanded the FCPA’s parameters to even include actions taken by a company’s vendors without a chief executive’s knowledge. One pharmaceutical company that donated to a legitimate Polish charity was hit with a charge for failing to accurately reflect the contribution on its financial statements. Royal Dutch Shell was charged because the mail delivery service it used allegedly paid money to Nigerian customs officials for expedited delivery–something the company had nothing to do with.

In 2010, Lanny Breuer bragged that FCPA “enforcement is stronger than it’s ever been–and getting stronger.” He also said, “One cornerstone of our FCPA enforcement policy: the aggressive prosecution of individuals.”

“The Foreign Corrupt Practices Act basically says you can’t give gifts to foreign government officials–which includes campaign contributions and donations to certain charities,” Hofmeister told Schweizer. “Of course, that’s what we get asked to do all the time from Washington [through leadership PACs]. Why doesn’t the FCPA cover Washington?”